Download Class 6 Social Science NCERT Solutions, latest books, Sample Papers and Question Papers with solutions, printable worksheets with important questions and answers and chapter notes for tests and exams. All study material has been prepared as per the latest syllabus and guidelines issued by CBSE and NCERT 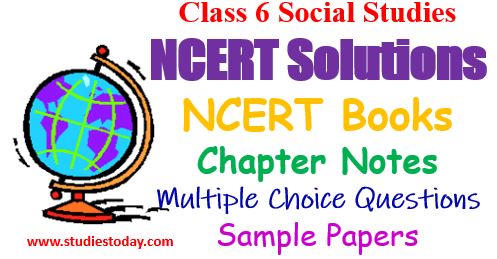 The Class 6 Social Science students should be able to perform the following:

Class 6 Social Science is divided into three sections which is history, political science and geography.  The details regarding all the three sections and the important chapters are being provided below.

An Introduction to History

When, Where and How
(a) The time frame under study.
(b) The geographical framework.
(c) Sources.

The Earliest Societies
(a) Hunting and gathering as a way of life, its implications.
(b) Introduction to stone tools and their use.
(c) Case study: the Deccan.

The First Farmers and Herders
(a) Implications of farming and herding.
(b) Archaeological evidence for crops, animals, houses, tools, pottery, burials, etc.
(c) Case study: the North-West, and North-East.

The First Cities
(a) The settlement pattern of the Harappa civilization.
(b) Unique architectural features.
(c) Craft production.
(d) The meaning of urbanism.
(e) Case study: the North-West.

Different Ways of Life
(a) The Vedas and what they tell us.
(b) A contemporary chalcolithic settlement.
(c) Case studies: the North-West and the Deccan.

Early States
(a) Janapadas to Mahajanapadas
b) Case study: Bihar, Magadha and the Vajji confederacy.

The First Empire
(a) The expansion of the empire.
(b) Asoka
(c) Administration

Contacts with Distant lands
(a) The Sangam texts and long distance exchange. Suggested regions: the Tamil region, extending to south east Asia and the west.
(b) Conquerors from distant lands: north western and western India.
(c) The spread of Buddhism: north India to Central Asia.

Political Developments
(a) Gupta empire and Harshavardhana.
(b) Pallavas and Chalukyas.

Culture and Science
(a) Literature, including the Puranas, the epics, other Sanskrit and Tamil works.
(b) Architecture including early monasteries and temples, sculpture, painting (Ajanta);
(c) Science.

The major objectives of the course are to:

1. Develop an understanding about the earth as the habitat of humankind and other forms of life.

2. Initiate the learner into a study of her/his own region, state and country in the global context.

3. Introduce the global distribution of economic resources and the on going process of globalization.

4. Promote the understanding of interdependence of various regions and countries

The Earth - Our Habitat

Planet: Earth in the solar system.

Globe: the model of the earth, latitudes and longitudes; motions of the earth rotation and revolution.

Four realms of the earth: lithosphere, hydrosphere, atmosphere and biosphere: continents and oceans.

Major relief features of the earth.

India in the world: physiographic divisions of India – mountains, plateaus and plains; climate; natural vegetation and wild life; need for their conservation.

At the elementary stage, the idea is to introduce students to various aspects of political, social and economic life. This will be done through a preliminary focus on certain key concepts, knowledge of which is essential to understand the functioning of Indian democracy. These concepts will be explained using imaginary narratives that allow children to draw connections between these and their everyday experiences. There will be no attempt made at this level to cover all aspects of India’s democratic structure, but rather the effort is more to provide an overview with which the child learns to critically engage by constructing herself as an interested citizen of a vibrant and ongoing democratic process. The focus on the real-life functioning of institutions and ideals is to enable the child to grasp the deep interconnectedness between the political and social aspects of her everyday life, as well as the impact of these two in the realm of economic decision-making.

• To enable students to make connections between their everyday lives and the issues discussed in the textbook;

• To have students imbibe the ideals of the Indian Constitution;

• To have children gain a real sense of the workings of Indian democracy: its institutions and processes;

• To enable students to grasp the interconnectedness between political, social and economic issues;

• To have them recognize the gendered nature of all of the issues raised;

• To have them develop skills to critically analyze and interpret political, social and economic developments from the point of view of the marginalized;

• To have them recognize the ways in which politics affects their daily lives.

In the first year of the new subject area, ‘Social and Political Life’ the themes of diversity, interdependence and conflict are to be focused on. This is done through first elucidating aspects of social diversity through a discussion of linguistic diversity as well as the diversity of art forms. In discussing these topics the idea is to celebrate diversity and interdependence while also highlighting that this can be zone for conflict. The idea of government is introduced at this grade and then elaborated upon through a discussion of the types of government at the local level, as well as different aspects of their functioning. Through focusing chapters on concrete, though narrativised, Syllabus for Classes at the Elementary Level 178 examples of land administration in the rural context and sanitation services in the urban one, the attempt is to have the child gain an experiential understanding of the ways in which local government functions. The last chapter through its focus on how people make a living in the rural and urban context discusses issues of the diversity of livelihoods.

The specific objectives of the course, where it is not clear from the rationale of the approach, are indicated beside the themes to be taught in the course.

In this unit we focus on various aspects of diversity. The first section begins by having the child recognize diversity as a fact of being human and understanding diversity as different ways of doing the same thing. The second section builds on this by having the child interrogate societal prejudices against diversity, recognizing that the self can be made up of multiple identities and that the Constitution compels us to respect diversity.

This unit introduces the student to the idea of government. The first section focuses on the need for it, the history of adult franchise, the various types of governments that exist at present. The second section discusses the key elements that influence the functioning of democratic government.

Section 1
• The need for government.
• Decision-making and participation.
• The quest for universal adult franchise through examples of the sufferagate movement and the antiapartheid struggle.
• Various forms of government and absence of collective sanction.

Section 2
Key elements that influence the functioning of democratic government:
• Participation and accountability.
• Resolution of Conflict.
• Concerns for Equality and Justice.

Section 1
Panchayati Raj
• Description of panchayat including electoral process, decision making, implementation of decisions
• Role of a gram sabha
• Women and the panchayat

Rural Administration
• Focus on a land dispute and show the role of local police and patwari.
• On land records and role of patwari.
• On the new inheritance law.

Urban Livelihoods
• Difference between primary, secondary and tertiary occupations.
• Descriptions of various types of livelihoods including vegetable vendor, domestic servant, garment worker and bank employee.
• Differences between self-employed, regular employment and wage employment.
• The inter linkage between rural and urban lives through a discussion of migration.