Class 6 mathematics has some very important chapters like Knowing our Numbers, Whole Numbers, Factors and Multiples, Understanding Elementary Shapes, Constructions, Ratio & Proportion etc. Students should do all questions given at the end of each chapter of NCERT Class 6 Mathematics Book. The Mathematics book for class 6 has been nicely designed with great questions. Dont forget to download NCERT Solutions for class 6 Mathematics in pdf format for each chapter. Along with the solutions for NCERT book chapters we have also provided Exemplar solutions for class 6 Mathematics all chapters. Always do exemplars for class 6 maths if you want good marks. Also get free sample papers, last year question papers, hots, syllabus, multiple choice questions (mcqs) easy to learn and understand concepts of all chapters, as per ncert and cbse guidelines. Get, Moral Science Questions and Answers in PDF Form. 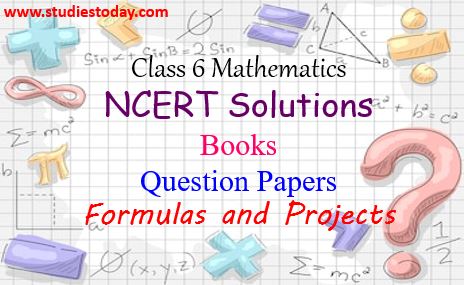 Mathematics in class 6 is an extremely important and scoring topic. The students are expected to strictly follow the curriculum Which has been circulated by NCERT and follow the books which have been published As for the syllabus issued by CBSE. When the child will go through various chapters which are being taught in class 6 mathematics then it is expected that the child will be able to perform the following activities with the help of their teachers and parents. Teachers  should look into the following activities and keep on testing class 6 mathematics students to make sure that the understanding of the students is such that they're able to clearly understand the concepts and will be in a position to apply the concepts in various situations as well as also help to improve the problem solving and mathematical analytical skills of class six students.

- Classify numbers on the basis of their properties like even, odd, etc.

- Create number patterns through which HCF and LCM can be discussed

- Observe situations that require the representation by fractions and decimals. Students are suggested to do Worksheets for class 6 Mathematics on a regular basis to make sure they are fully prepared for the exams.

- Explore and generalise the need of using variables alphabets

- Discuss and solves word problems that use ratios and unitary method

- Explore various shapes through concrete models and pictures of different geometrical shapes like triangles and quadrilaterals, etc and also for Sample Papers for Class 6 Mathematics

- Observe various models and nets of 3-Dimensional (3-D) shapes like cuboid, cylinder, etc. and discuss about the elements of 3-D figures such as faces, edges and vertices and also refer to NCERT Solutions for Class 6 Mathematics.

- Share the concept of angles through some examples like opening the door, opening the pencil box, etc. Students can be asked to give more such examples from the surroundings

- Classify angles based on the amount of rotation.

Class 6 mathematics syllabus, examination structure and important topics. The syllabus for class 6 is mainly driven by the topics given in the mathematics books issued by NCERT books, most of the schools are also recommending books of other publishers which have additional worksheets, which the students can practice to score better in class tests and school level examinations. Details of important topics is given below:

(i). Knowing our Numbers:

Consolidating the sense of number ness up to 5 digits, Size, estimation of numbers, identifying smaller, larger, etc. Place value (recapitulation and extension), connectives: use of symbols =, >, < <,>and use of brackets, word problems on number operations involving large numbers up to a maximum of 5 digits in the answer after all operations. This would include conversions of units of length & mass (from the larger to the smaller units), estimation of outcome of number operations. Introduction to a sense of the largeness of, and initial familiarity with, large numbers up to 8 digits and approximation of large numbers)

Simplification of brackets, Multiples and factors, divisibility rule of 2, 3, 4, 5, 6, 8, 9, 10, and 11. (All these through observing patterns. Children would be helped in deducing some and then asked to derive some that are a combination of the basic patterns of divisibility.) Even/odd and prime/composite numbers, Co-prime numbers, prime factorization, every number can be written as products of prime factors. HCF and LCM, prime factorization and division method for HCF and LCM, the property LCM × HCF = product of two numbers. All this is to be embedded in contexts that bring out the significance and provide motivation to the child for learning these ideas.

Introduction to geometry. Its linkage with and reflection in everyday experience.

Interior and exterior of closed figures.

Quadrilateral — Sides, vertices, angles, diagonals, adjacent sides and opposite sides (only convex quadrilateral are to be discussed), interior and exterior of a quadrilateral.

CONCEPT OF PERIMETER AND INTRODUCTION TO AREA

Introduction and general understanding of perimeter using many shapes. Shapes of different kinds with the same perimeter. Concept of area, Area of a rectangle and a square Counter examples to different misconnects related to perimeter and area.

Perimeter of a rectangle – and its special case – a square. Deducing the formula of the perimeter for a rectangle and then a square through pattern and generalization.

(i).What is data - choosing data to examine a hypothesis?

(ii). Collection and organization of data - examples of organizing it in tally bars and a table.