CBSE Class XII Biology HOTs Questions Database for chapter Environmental Issues. Based on CBSE and CCE guidelines. The students should practice these HOTs Questions to gain perfection which will help him to get more marks in CBSE examination. Based on CBSE and CCE guidelines. Based on the same pattern as released by CBSE every year. CBSE releases HOTs Questions every year. These papers are released prior to the CBSE board examinations so that students can do practice. database of 1 marks, 2 marks, 3 marks and 5 marks questions.

Q.1).A factory drains its waste water into a nearby lake. What will be its effect on the lake after a few days?

1) Eutrophication due to growth of algal bloom. 1

Q.2. The names of organisms in an aquatic food chain is given below. Give the organism having the maximum concentration of DDT. 1 Large fish-Zooplankton-fish Eating birds- small fish-phytoplankton.
2) Fish-eating birds 1
Q.3)The central pollution control board observed that a thermal power plant is emitting 80% of its particulate matter in the exhaust due to poor maintenance? What could be the cause for this increase in % of particular matter? 1
3) Poor maintenance of the electrostatic Precipitator.
Q.4) The birds egg shells become thinner in an area where there is an excess application of pesticides. Comment.
4) High concentration of DDT disturb calcium metabolism in birds which causes thinning of egg shell.
Q.5) Motor vehicles with catalytic converter should use unleaded petrol. Why?1
5) Lead inactivates catalyst
Q.6) Why should we be thankful to micro-organism present in domestic sewage?1
6) Microorganism present in domestic sewage break down organic substances present in the sewage.
2 marks
Q.1) Vehicles are fitted with catalytic converters. Give reason 2
Ans.1) Catalytic converter has platinum palladium and rhodium as catalyst to reduce emission of poisonous gases. As the exhaust passes through the converter unburnt hydrocarbon are converted into CO2 and water and carbon monoxide;
nitric oxide are changed in to CO2 and nitrogen gas.
Q.2) It was observed that some of the aquatic birds’ population has been declining. On analysis of the water in their habitat, high concentration of DDT was found
a) What caused the decline is birds’ population?
b) What is this phenomenon known as? 2
2) a) DDT in the body interferes with the calcium metabolism, resulting in thinning of egg shell & their premature breaking ultimately leading to a decline is bird population 1+1
b) Biomagnification
Q.3) A man had a B. class Benz which has a very good catalytic converter. On his way the petrol was exhausted & he stopped at a petrol pump. The person at the petrol pump had only leaded petrol. Out of necessity the man had to fill leaded petrol in his car. 2
a) What is its impact on the catalytic activity of the converter?
b) Explain the impact on the environment.
Ans.3) a) Lead in the petrol inactivates the catalyst 1+1
b)Unburnt hydrocarbons are released which increases the air pollution.
Q.4) A person has inhaled air having particulate pollutants of size less than 2.5 micrometers in diameter. What could be the impact of their pollutants on his respiratory system? 2
Ans.4)Particulate pollutants inhaled deep into the lungs cause irritation, inflammation, damage to the lungs, & premature death.
Q.5) Mention the green house gases & their proportion in the pie diagram given below.2 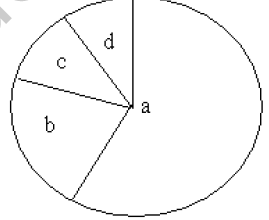 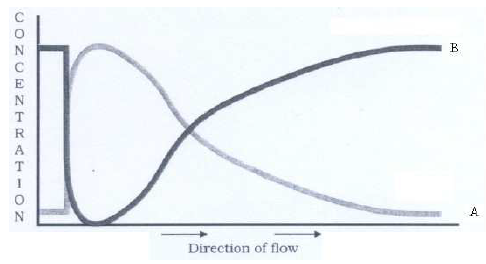 In the above graph what does A & B depict? 2
Ans. 7) A-BOD 1+1
B-Dissolved oxygen
Q.8) The application of DDT for a long period resulted in the elimination of bird species from a locality. How does it happen? Explain. 2
Ans.8) Bio magnification - (accumulation of DDT in the body of bird) disturbs the metabolism of calcium - thin egg shell.
-Premature hatching - decline in population
Q.9) Identify the wrong pair/s and correct it. 2
a) Chernobyl incident-Radio active waste
b) Snow blindness cataract- High dose of CFC
c) Chipko movement- Save trees
d) Polyblend-Solves air pollution.
Ans.9) b-snow blindness cataract-High dose of UV-B
D-Polyblend-solve plastic pollution.
Q.10) Dumping waste in landfills is not a real solution for disposing wastes. Why? 2
10) a) The amount of garbage generation specially in the metros has increased so much that these sites are getting filled too.
b) Also there is a damage of seepage of chemicals etc from these land fills polluting the underground water resources
Q.11) Ramesh collected water samples on his boat-trip downstream along a river. On analysis it was observed that the dissolved oxygen content reduced initially and later increased gradually. Can you help him plot a graph on concentration of DO & BOD downstream.
11) P.NO 274 fig 16.3 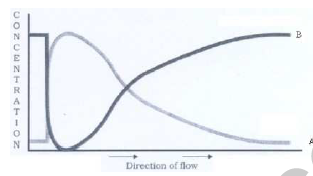 3 MARKS
Q.1)Many coastal areas may get submerged due to the environmental changes taking place at the present rate. Give the cause, and state two measures to check it. 3

Ans.1) Global warming due to the increase in conc. of green house gases It can be checked by.  (Any 2)

ii) Reduce the use of fossil Fuel iii) Prevent deforestation

a) Waste products from one process are cycled in as nutrients for the other process.

b) There is no need for chemical fertilizers as cattle excreta are used as manure.

c) Crop waste is used to create compost, which is used as manure to generate      electricity.

Q.3) Ecosan toilets are a hygienic, efficient and cost effective solution to the disposal of human wastes. Justify.

Ans.3)  Human  excreta are  also  recycled  into  manure which  reduces the  use  of chemical fertilizers.

Q.1) Observe the following figure carefully and answer the questions that follow.    2+2+1=5
a) Label the parts A, B, C & D
b) What are the steps involved in the removal of particulate matter?
c) How is it different from scrubber?

B)   i) The electrode wires are maintained in several thousand volts, which produces corona that releases electron.         1

C) The electrostatic precipitator removes the particulate matter where as the scrubber removes the gases like SO2.