CBSE Class XII Biology HOTs Questions Database for chapter Biodiversity. Based on CBSE and CCE guidelines. The students should practice these HOTs Questions to gain perfection which will help him to get more marks in CBSE examination. Based on CBSE and CCE guidelines. Based on the same pattern as released by CBSE every year. CBSE releases HOTs Questions every year. These papers are released prior to the CBSE board examinations so that students can do practice. databse of 1 marks, 2 marks, 3 marks and 5 marks questions.

Q.1) a) India has more than 50000 different strains of rice and 1000 varieties of mangoes.
b) Western Ghats have a greater Amphibian diversity than the Eastern Ghats. What do you infer from the above two statements? 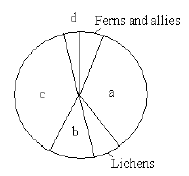 Identify a,b,c and d in the above pie diagram showing global biodiversity of plants.

Biodiversity decreases as one move from tropics to equator.]

Q.3) Would the extinction of one insect pollinator affect the ecosystem? Explain 2

It may lead to co-extinction of species

Q.4) The species diversity of plants is much less than that of animals. What could be the reason for this and figure out how animals achieved greater diversifications? 2
Ans 4) Animals have greater mobility  Animals migrate to different environmental conditions and undergo adaptation
Q.5) Seeds of different genetic strains are kept for long periods in seed banks. Explain the conservative strategy involved in this process. 2
Ans.5) Ex-situ conservation They are preserved in viable and fertile condition for long periods using cryopresrvation techniques.
Q.6) Amazon forests are regarded are "Lungs of the Planet". Why? 2
Ans.6) Amazon forests have the greatest biodiversity in the world and harbour a large number of plant species which release large amount of oxygen into the atmosphere.
Q.7) National parks come under 'in situ' conservation while Zoological parks under 'exsitu' conservation. comment. 2

Ans.7) National parks- in situ- It is the practice of protecting the endangered species in their natural habitats either by protecting or by defending the species from predators.

Zoological parks- ex situ- the threatened species are taken out from their natural habitat and placed in special setting and given protection and special care.

Q.8) There are 34 biodiversity hot spots in the world. What are the criteria of selection of such hot spots? 2

Q.9) Lantana & Eichornia are examples of two weeds. How do they affect the ecosystem? 2

Ans.9.These are examples of Alien species invasions. They threaten the indigenous species & lead to their extinction.

3 marks
Q.1) Biologists are not sure about how many prokaryotic species there might be. Give reasons.
Ans.1) i)The conventional taxonomic methods are not sufficient for identifying these microbial species
ii)Many of the species cannot be cultured under laboratory conditions.
iii) Biochemical and molecular biology techniques would put their diversity into millions.
Q.2) In an experiment, the slope of regression (z) is 0.2 and in another experiment the value obtained is 1.2. Explain the two situations in respect of species area relationships.

Ans.2) 0.2 is obtained in studies regardless of the taxonomic group or the region 1.2 is obtained if species area relationship is analysed among very large areas like the entire continents.

Q.3) Would Western Ghats ecosystems be less functional if one of its tree frog species is lost forever? Substantiate your answer in the light of hypothesis proposed by Paul Ehrlich.

Ans.3) According to the hypothesis proposed by Paul Ehrlich the "vivet popper hypothesis" each species is essential in the balance of nature. If one is lost that much imbalance is caused in the ecosystem.