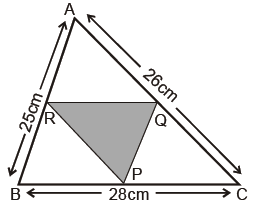 There is a visit in a school by Directorate of Education. Girls are asked to prepare Rangoli in triangular shape. Dimensions of Δ ABC are 26 cm, 28 cm, 25 cm. Garland is to be placed along the side of ΔPQR which is formed by joining midpoints of sides of ΔABC.
(a) Find the length of garland.
(b) What values are depicted here ?
Answer: (a) RQ | | BC and RQ =1/2  BC
(Mid pt. theorem)
=RQ = 14 cm
QP = 12.5 cm
PR = 13 cm
Perimetre = 14+12.5+13
= 39.5 cm
(b) Beauty, happiness, co-operation
Question. A class teacher gave students coloured papers in the shape of quadrilateral. She asked them to make parallelogram from it using paper folding.
(a) How can a parallelogram be formed by using paper folding ?
(b) Prove that it is a parallelogram.
(c) What values are depicted here ?
Answer: 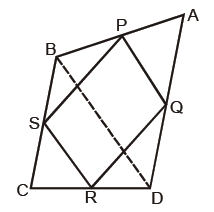 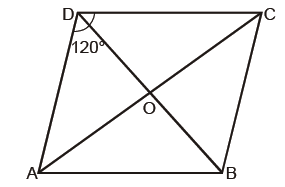 (a) Which fire station team can reach early and why ?
(b) Which value is depicted here ?
Answer: (a) D will send the team early ODC = 60° & OCD = 30° Ð OC > OD (side opp. to larger angle is longer)
(b) Serving the people with honesty
Question. Sohan wants to show gratitude towards his teacher by giving her a cardmade by him. He has three pieces of trapezium pasted one above the other as shown in the fig. These pieces are arranged in a way that AB || HC || GD || FE. Also BC=CD=DE and GF=6 cm. He wants to decorate the card by putting up a coloured tape on non parallel sides of trapezium. 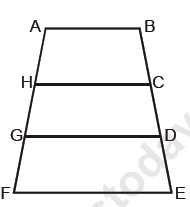 (a) Find the total length of coloured tape required if DE = 4cm.
(b) Which value is depicted by the student ?
Answer: (a) AB || HC || GD || FE and BC = CD = DE
= AH = HG = GF
(given three parallel lines making equal intercepts on any transversal then they will make equal intercepts on other transversal also)
threre for, AF+FE = 18+12 = 30 cm
(b) Happiness, beauty, knowledge
Question. A farmer has a field in the form of a parallelogramABCD. One of his cow is suffering from some disease. To take good care of her, he tied the cow at one corner of the field. The corner angle of the field is 65°. 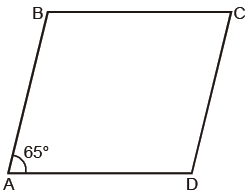 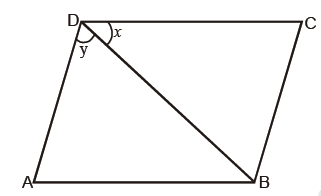