v) Food is carried from the leaves by pipes formed by _______ tissues.

i) Which of the following is the symbol of gold -

ii) A soap solution is

a) acidic b) alkaline c) neutral d) none of these

iii) A black body with a rough surface is a good -

vi) Earthworms breathe through their

i) An abbreviation of the name of an element.

ii) These are called as soluble bases.

iii) The fingerlike folds in the wall of the small intestine.

v) The blood vessels that carries blood away from the heart.

vi) The tiny openings on stems and fruits that plants use for breathing.

vii) A weight hung from a fixed point in such a way that it can swing freely.

i) An egg without its shell swells when it is placed in a bowl of water.

ii) Sour things (vinegar or pickles) are not kept in metal pots.

iii) While swallowing, the food enters the food pipe but it does not enter the wind pipe.

iv) The water moves up the stem against the force of gravity.

i) What are neutral substances?

ii) How does heat from the sun reaches the earth?

iii) Why is it better to wear lighter shades in summer?

iv) When is a moving body said to be in uniform motion?

v) What are autotrophs? Name an organism other than green plants that is an autotroph.

vi) Why is the heart divided into two halves by a thick wall?

vii) How do leaves of plants exchange gases with the atmosphere?

Q.8 Answer the following in not more than 40 words. Part (vii) is compulsory.

i) a) What is a balanced chemical equation?

b) Find the valencies of the underlined element.

ii) Name three mineral acids and give their formula.

iv) What is the juice secreted by liver called? What does it do?

v) How does sweating helps to maintain our body temperature?

vi) Why do gardeners loosen the soil from time to time ?

vii) During a dental check up in school, Rohan was told that tooth decay had just started at the top of his last large back tooth in the lower jaw. He shared this with his best friend Vikram who had good dental health.

Vikram advised him to prevent further tooth decay by giving some tips on dental health.

a) Name the tooth where decay had started.

b) What is the function of such teeth?

c) What value is displayed by Vikram.

i) a) Name two elements that have variable valency.

b) Give the formulae & names of two compounds formed by each of these elements.

iv) a) What happens to the radiant heat when it falls on a body?

b) What does the absorption of radiant heat by a body depend on ?

v) a) What are nephrons?

b) How do they help in the excretion of waste?

vi) How do roots absorb water from the soil? Also draw the diagram.

vii) How does oxygen from the air in the lungs reach the cells? Also draw the diagram. 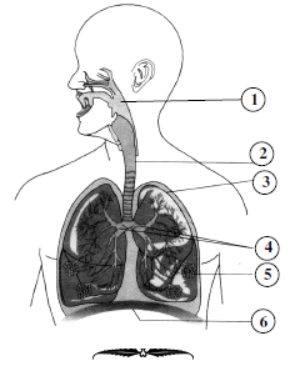