Science
Download PDF
Read and download free pdf of CBSE Class 8 Science Some Natural Phenomena Worksheet Set A. Students and teachers of Class 8 Science can get free printable Worksheets for Class 8 Science in PDF format prepared as per the latest syllabus and examination pattern in your schools. Standard 8 students should practice questions and answers given here for Science in Grade 8 which will help them to improve your knowledge of all important chapters and its topics. Students should also download free pdf of Class 8 Science Worksheets prepared by school teachers as per the latest NCERT, CBSE, KVS books and syllabus issued this academic year and solve important problems provided here with solutions on daily basis to get more score in school exams and tests

Class 8 Science students should refer to the following printable worksheet in Pdf for Some Natural Phenomena in standard 8. This test paper with questions and answers for Grade 8 Science will be very useful for exams and help you to score good marks

CBSE Class 8 Science Worksheet - Some Natural Phenomena Part A. Revision worksheets, Sample papers, Question banks and easy to learn study notes for all classes and subjects based on CBSE and CCE guidelines. Students and parents can download free a collection of all study material issued by various best schools in India. The study material has been carefully compiled by the best teachers in India. The students should practice the questions database to get better marks in examination. Please refer to other links for free download of high quality study material. Based on CBSE and CCE guidelines. Based on the same pattern as released by CBSE every year. Study material for final/ term/ SA1/ SA2 Examinations conducted by various schools affiliated to Central Board of Secondary Education (CBSE) in India and abroad. CBSE Study material has been compiled to help students preparation which will helps the students to concentrate more in areas which carry more marks.

Question. What is meant by earthing?
Answer. The process of transfer of charges from a charged object to the earth is called earthing.

Question. When does a body become discharged?
Answer. Whe a body looses its charges, it is said to be discharged.

Question. What is a lightning rod?
Answer. A lightning rod is a device used to secure tall buildings from the effect of lightning.

Question. What is an earthquake?
Answer. An earthquake is a sudden shaking or trembling of the earth.

Question. What causes an earthquake?
Answer. The tremors of the earthquake are causes by the disturbance deep down inside the uppermost layer of the earth called the crust.

Question. What are seismic waves?
Answer. The tremors produce waves on the surface of earth known as seismic waves.

Question. When a charged balloon is brought near a charged refill, there is attraction between the two. What type of charge exists between the two?
Answer. The charge on the balloon and a refill are different, because unlike charges attract each other.

Question. When is lightning seen?
Answer. When the negative charges from the clouds and the positive charges on the ground meet huge amount of energy is produced as bright light and sound. This is seen as lightning.

Question. A part from disturbance inside the earth, what are the other reasons of earthquake?
Answer. Earthquakes can also occur due to underground nuclear explosion, or when a volcano erupts, or when a meteor hits the earth.

Question. What useful changes are caused by earthquakes?
Answer. Earthquakes can also cause new islands, coal breaches and fresh water springs to emerge due to upheaval.

Question. DExplain the working of seismograph.
Answer. The seismograph consists of a vibrating rod which starts vibrating when tremors occur. A pen is attached to the vibrating rod and records the seismic waves on a paper which moves under it.

Question. Suppose you are outside you home and an earthquake strikes. What precaution would you take to protect yourself?
Answer. If you ar eoutdoors and an earthquake strikes, some precautions we should take to protect ourself:
(i) Leave your building and more to open areas.
(ii) Keep away from high rise buildings.A gold leaf electroscope
(iii) Keep away from trees, signboards, electric poles.
(iv) If you are in a vehicle, remain inside it. 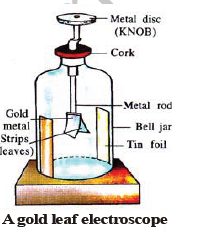 Question. Describe with the help of a diagram an instrument which can be used to detect a charged body.
Answer. An electroscope is an apparatus to test an electric charge.
Conclusion : An electroscope has a brass rod passing through a tight fitting cork in a glass bottle. A pair of thin gold leaves are attached to the lower end of the brass rod. To protect the gold leaves from external electric charge the lower half of the bottle is lined with tin foil which is 'earthed' by connecting it to the table. This kmind of electroscope is called a gtold leaf electroscope.
Working : When a charged rod is touched to the metal disc, the charge is transferred to the gold leaves and they diverge.

Question. During a thunderstorm which places are safe?
Answer. Euring a thunderstorm, a house or building is the safest place. If you are travelling by car or by bus, you are safe inside with windows and doors of the vehicle shut.

Question. During a thunderstorm, which places are unsafe if you are outside?
Answer. If you are outside :
(i) Open vehicles, like motor bike, tractor are not safe.
(ii) Carrying umbrella is not a good idea.
(iii) Stay away from poles or other metal objects.
(iv) Do not lie on the ground