Science
Download PDF
Read and download free pdf of CBSE Class 8 Science Reproduction In Animals Worksheet Set A. Students and teachers of Class 8 Science can get free printable Worksheets for Class 8 Science in PDF format prepared as per the latest syllabus and examination pattern in your schools. Standard 8 students should practice questions and answers given here for Science in Grade 8 which will help them to improve your knowledge of all important chapters and its topics. Students should also download free pdf of Class 8 Science Worksheets prepared by school teachers as per the latest NCERT, CBSE, KVS books and syllabus issued this academic year and solve important problems provided here with solutions on daily basis to get more score in school exams and tests

Class 8 Science students should refer to the following printable worksheet in Pdf for Reproduction In Animals in standard 8. This test paper with questions and answers for Grade 8 Science will be very useful for exams and help you to score good marks

CBSE Class 8 Science Worksheet - Reproduction in Animals Part A. Revision worksheets, Sample papers, Question banks and easy to learn study notes for all classes and subjects based on CBSE and CCE guidelines. Students and parents can download free a collection of all study material issued by various best schools in India. The study material has been carefully compiled by the best teachers in India. The students should practice the questions database to get better marks in examination. Please refer to other links for free download of high quality study material. Based on CBSE and CCE guidelines. Based on the same pattern as released by CBSE every year. Study material for final/ term/ SA1/ SA2 Examinations conducted by various schools affiliated to Central Board of Secondary Education (CBSE) in India and abroad. CBSE Study material has been compiled to help students preparation which will helps the students to concentrate more in areas which carry more marks.

Fill in the blanks :

Answer the following questions in one or two words :

1. Name the method of asexual reproduction in which individuals develops from the bud.

2. Give two examples of unisexual organism.

3. Give two examples of bisexual organisms.

4. Name the process of reproduction in Amoeba.

5. Give example of an animal which reproduce by budding. 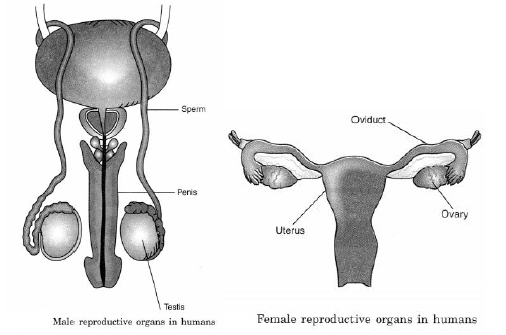 Female Reproductive Organs: The female reproductive organs are a pair of ovaries, oviducts (fallopian tubes) and the uterus.
Ova: Ovary produces females gametes called ova (Egg).
In human beings, a single matured egg is released into the oviduct by one of the ovaries every month.Uterus is the part of the female reproductive system where the development of the embryo takes place.Both sperm and ova are single-celled structure.
The fusion of the ovum and the sperm is called fertilisation. 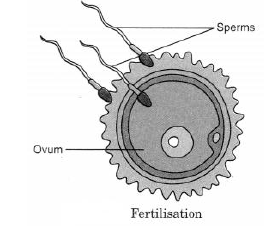