Download printable Science Class 7 Worksheets in pdf format, CBSE Class 7 Science Electric Current and Its Effects Worksheet Set A has been prepared as per the latest syllabus and exam pattern issued by CBSE, NCERT and KVS. Also download free pdf Science Class 7 Assignments and practice them daily to get better marks in tests and exams for Grade 7. Free chapter wise worksheets with answers have been designed by Standard 7 teachers as per latest examination pattern

Class 7 Science students should refer to the following printable worksheet in Pdf for Electric Current and Its Effects in Grade 7. This test paper with questions and solutions for Standard 7 Science will be very useful for tests and exams and help you to score better marks

Class 7 Science Worksheet for Electric Current and Its Effects

Electric Current and Its Effects

ACTIVITY- 1 : To make an electrc circuit. `
Question 1- How many terminals are there in an electric cell? Name them.
Answer- Two i.e. positive and negative terminals.
Question 2- What is the role of switch in the electric circuit?
Answer- Switch closes (ON) and open (OFF) the electric circuit.
ACTIVITY- 2 : Heating effects of electric current.
Question 1- When switch is in ‘ON’ position then bulb ………… and feels …………
Answer- Glows, hot.
ACTIVITY- 3 : Heating effects of current in a wire. `
Question 1- When switch is ‘OFF’ the wire feels hot. (True/False)
Answer- False.
Question 2- When swtch is ‘ON’ the wire feels cold. (True/False)
Answer- False.
Question 3- If you take any other wire, will you feel the same effect?
Answer- Due to high resistivity of nichrome, it shows large heating effect. Any other wire will produce low heat or it may melt.
ACTIVITY- 4 : Magnetic effects of electric current.
Question 1- Why a magnetic needle points in NS direction when there is no magnetic substance near it?
Answer- Because earth behaves like a magnet.
Question 2- Why magnetic needle gets deflected when a bar magnet is brought near it?
Answer- Because magnetic field of bar magnet, exert force on magnetic needle.
Question 3- Why a magnetic needle gets deflected when current is switched ON?
Answer- When current is switched ON, a magnetic field is produced around the wire.
ACTIVITY- 5 : To make an electromagnet.
Question 1- Why do the pins get stick to the iron nail when current is passed through it?
Answer- Because on passing electric current, the coil along with iron nail becomes magnet.
Question 2- Why the pins fall back after sometime when current is switched off?
Answer- Because coil along with iron nail gets demagnetized when current is switched off.
EXERCISE
Question 1- Fill In The Blanks :
(i). Shorter line in the symbol for cell represents negative terminal.
(ii). Combination of two or more cells is called battery.
(iii). When key is in ON position current flows through the circuit.
(iv). In a battery positve terminal of one cell is connected to negative terminal of next cell.
(v). Electric heater works on the heating effect of current.
Question 2- Write True Or False.
(i). To make a battery of two cells, positive terminal of one cell is connected to negative terminal of another.(True)
(ii). Electric iron works on the basis of heating effect of current. (True)
(iii). Magnetic crane is based on magnetic effect of current. (True)
(iv). When current flows in the circuit then circuit is called open circuit. (False)
(v). An electric bell works on the principle of electromagnet. (True)
Question 3- Match The Column:-

Question 4. Choose One Option For The Follwing.
(i). Which electric appliance is not based on heating effect of current :
a) Electric toaster   b) Loudspeaker (✓)   c) Heater   d) Electric iron
(ii). Which of these devices are not based on magnetic effect of current :
a) Room heater (✓)   b) Magnetic crane    c) Electric bell    d) Loudspeaker
(iii). The amount of heat produced in wire depends on :
a) Nature of material    b) Length    c) Thickness   d) All of these (✓)
(iv). The wire used in the bulb is called :
a) Element    b) Spring    c) Filament (✓)    d) Component
(v). An electric bell consists of :
a) Gong    b) Hammer    c) Electromagnet    d) All of these (✓)
Question 5- Very Short Answer Type Questions.
(i) What is an electromagnet? How does it work?
Answer- The substances which become magnet when current passes through them and losses their magnetic effect when current is switched off, are called electromagnets. These are based on magnetic effect of electric current.
(ii) What is a magnetic crane? How does it work?
Answer- Magnetic crane is based on magnetic effect of electric current. It has an electromagnet with which we can pick big containers, separate magnetic materials from garbage.
(iii) Draw an electric circuit with one battery, one bulb and one switch in open position.
Answer-

Question 6- Short Answer Type Questions.
(a) Define the following terms :
(i) An electric cell, (ii) A battery, (iii) Electric circuit, (iv) Open circuit, (v) Closed circuit.
Answer-
(i) An electric cell- It is a source of electric current.
(ii) A battery- It is the combination of two or more than two cells.
(iii) Electric circuit- It is a closed path consists of electric appliances through which electric current flows.
(iv) Open circuit- It is the circuit through which current is not flowing.
(v) Closed circuit- It is the circuit through which current is flowing.
Question 7- Long Answer Type Questions.
(i) Explain the principle, construction and working of an electric bell using suitable diagram.
Answer-
Principle- Electric bell works on the principle of electromagnet.
Construction- It has main three parts – Electromagnet, gong and hammer.
Working- When we switch on the bell, current flows through the coil via contact screw and coil becomes electromagnet. It attracts the iron strips towards it and hammer strikes the gong to produce sound. In this process circuit break as hammer loss the contact with contact screw. So coil no longer remains electromagnet and do not attract hammer. This process continues again and again and the bell keeps ringing. 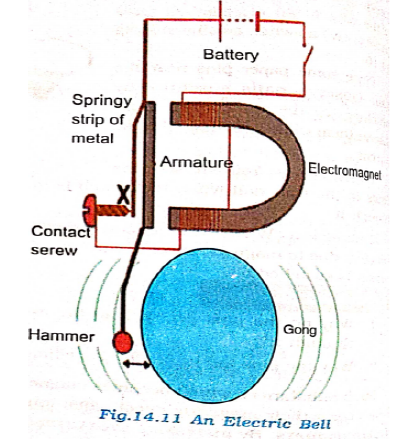 (ii) What is an electric fuse? How does it work? Why is it essential in an electric supply?
Answer- Electric fuse is a wire made of special materials which melt quickly and break when a large current is passed through it because of short circuit or overloading. Hence it breaks the electric circuit and prevent electric fires and accidents. It also prevents damage to electric appliances.

Q10)    What do you understand by incandescent electric bulbs?

Q11)    Explain about electric circuit and its components?

Q12)    State the difference between electromagnet and permanent magnet?

Q13)    Explain the heating effects of the electric current?