NEET UG Physics Atom and Nucleus MCQs with answers available in Pdf for free download. The MCQ Questions for NEET Physics with answers have been prepared as per the latest NEET Physics syllabus, books and examination pattern. Multiple Choice Questions form important part of competitive exams and NEET exam and if practiced properly can help you to get higher rank. Refer to more topic wise NEET Physics Questions and also download more latest study material for all subjects and do free NEET Physics Mock Test 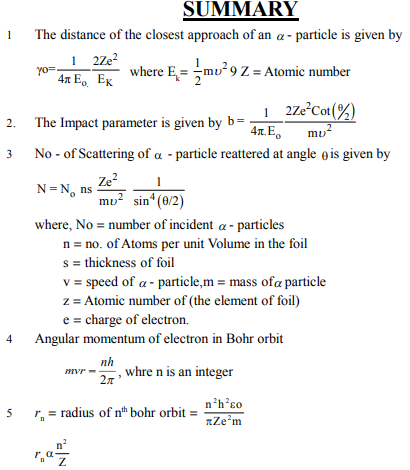 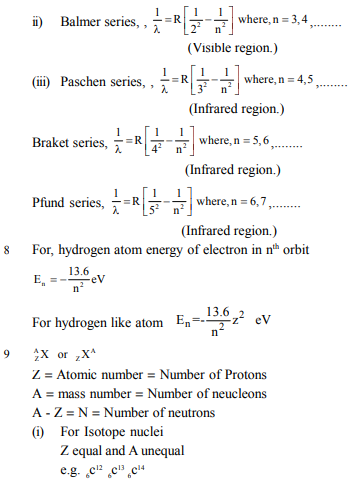 MCQ
For the answer of the following questions choose the correct alternative from among the given ones.

(2) Read the following question and choose correct Answer form given below.
(A) Both assertion and reason are true. Reason is the correct explanation of theAssertion
(B) BOth assertion and reason are true. Reason is not correct explanation of the assertion
(C) Assertion is true but reason is false.
(D) Both Assertion and Reason are false
(i) Assertion :- In a radio-active disintegration, an election is emitted by nucleus.
Reason :- eleccon are always Present in-side the nucleus.
(ii) Assertion :- An election and Positon can annibilate each other creating Photon
Reason:- Electon and Positon form a Particle and anti Particle.
(iii) Assetion:- An isolated radioactive atom may not decay at all what eVer be its half time
Reason:- Readioactive decay is a statistical Phenomena.
(iv) Assertion :- Fragment Produced in the fission of u235 are active
Reason:- The fragments have abnormally high Proton to neutron ratio
(3) Each of the following question contain two stalements.choose correct answer form the given below.
(i) statement-I:- Large angle scattering of al-pha Particle led to discovery of state ment-II :- Entire Positive charge of atom is concentrated in the central core.
(A) statement -I and II are true. and statement II is correct explanation of statement-I
(B) statement -I and II are true, but statement-II is not correct explanation of statement I
(C) statement I is true, but state ment II is false.
(D) statement I is false but statement II is true
(ii) statement-I 1 amu=931.48 MeV
statement-II It follows form E=mc2
(iii) statement -I:-half life time of tritium is 12.5 years
statement-II :- The fraction of tritium that remains after 50 years is 6.25%
(iv) statement-I:- Nuclei of different atoms have same size
state ment-I I :- R=Ro(A)1/3 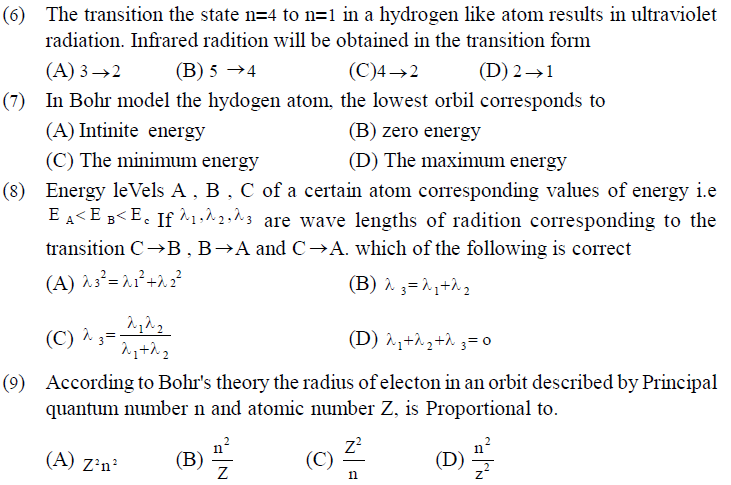 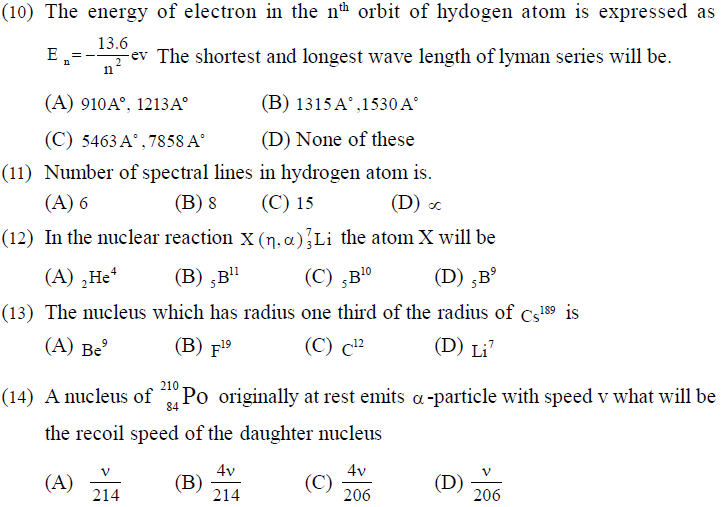 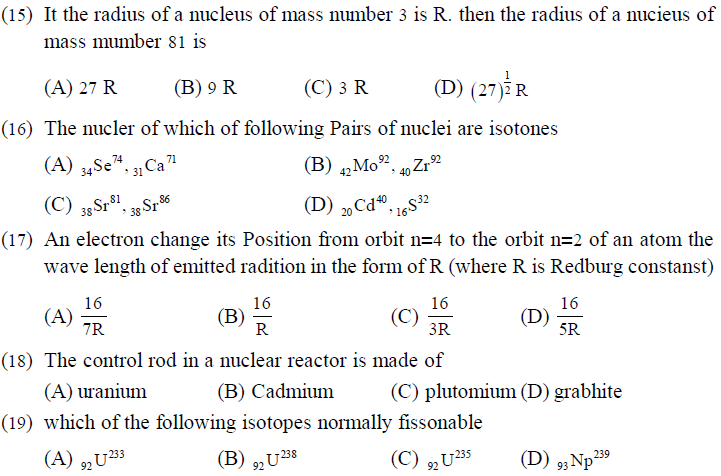 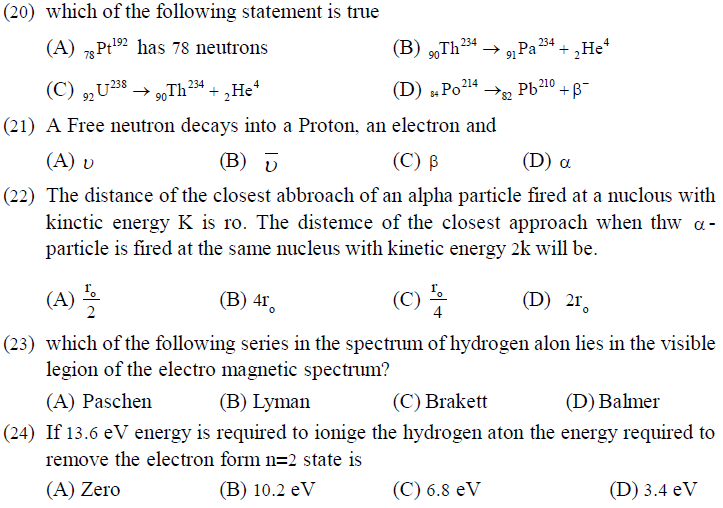 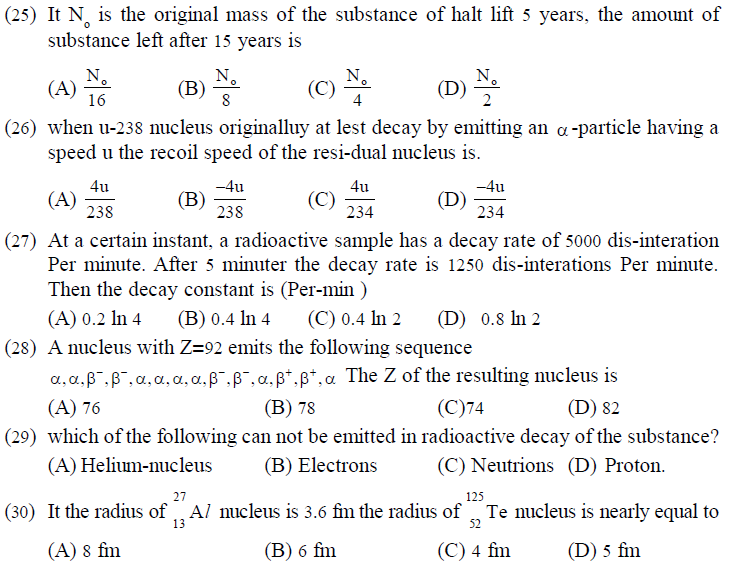 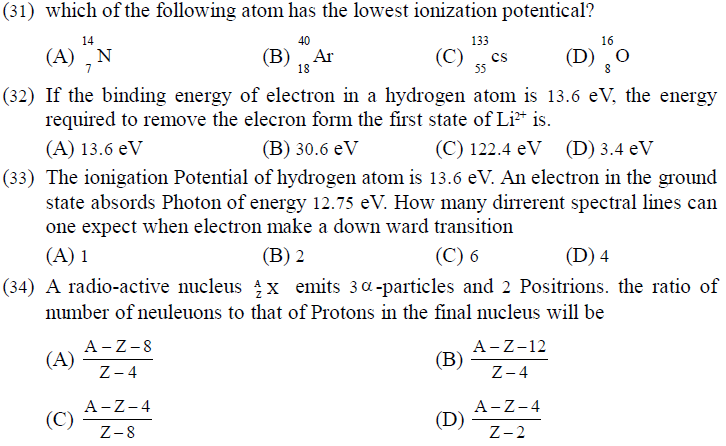 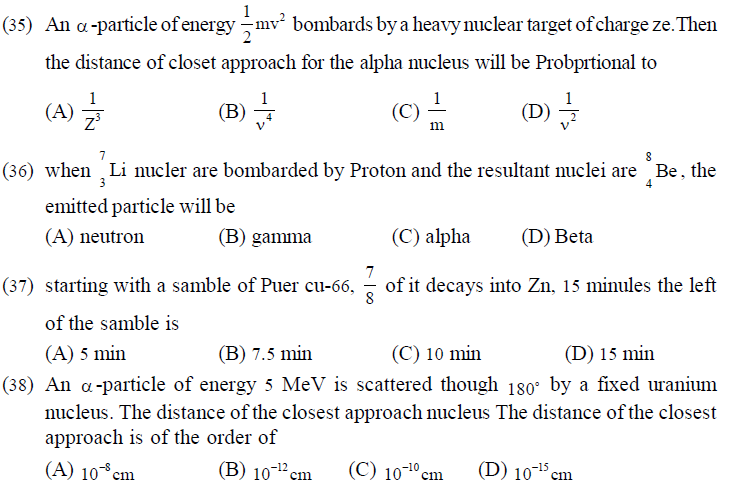 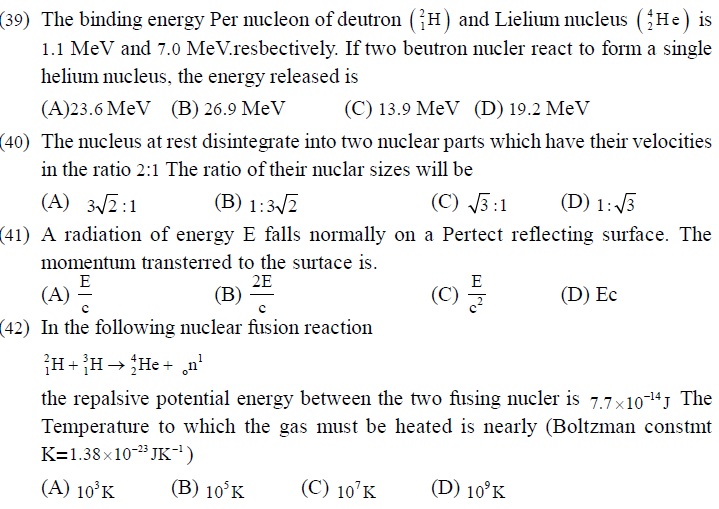 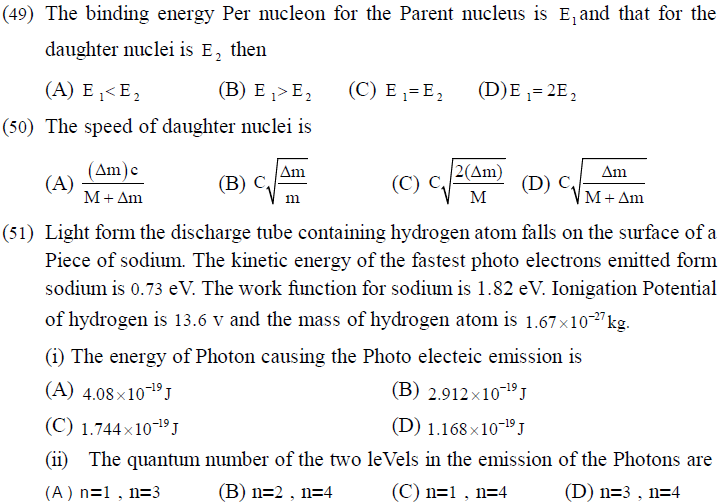 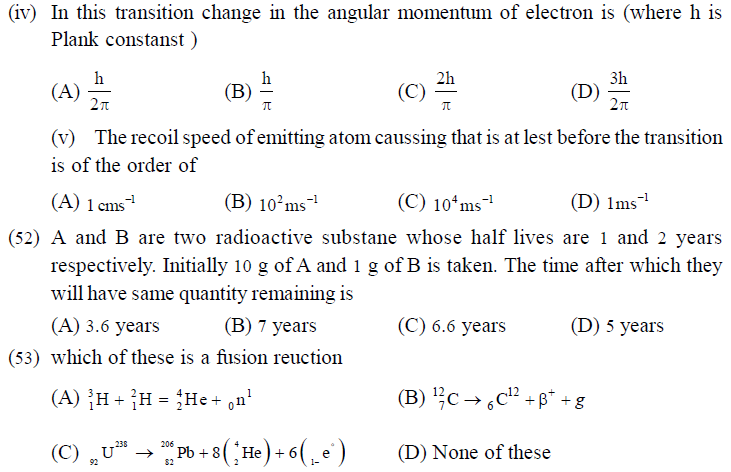 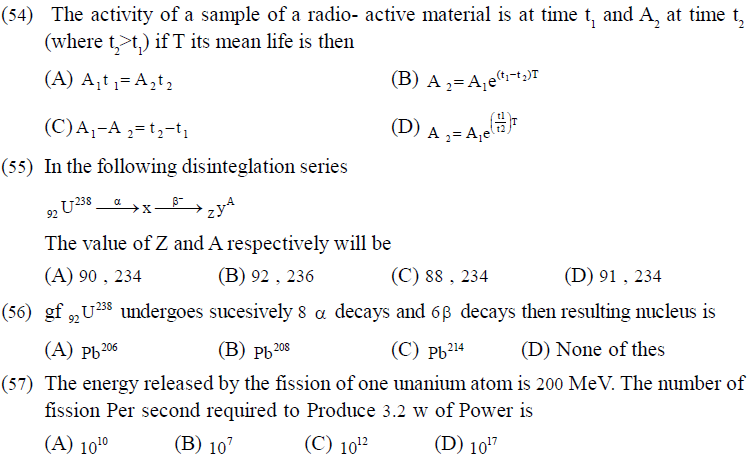 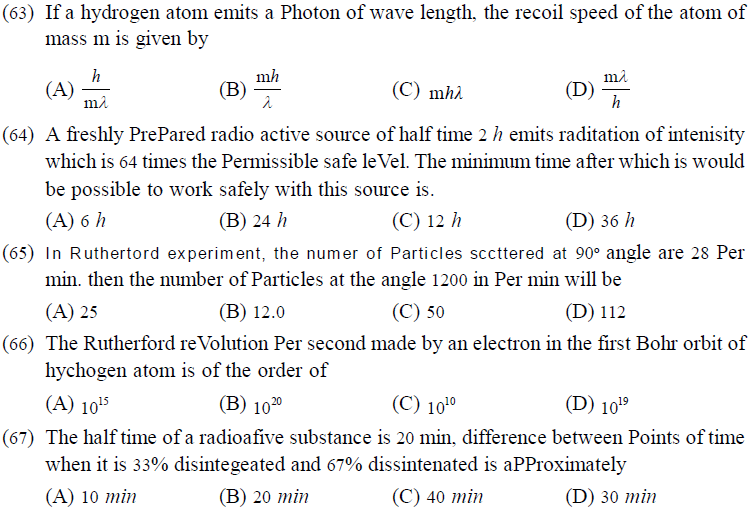 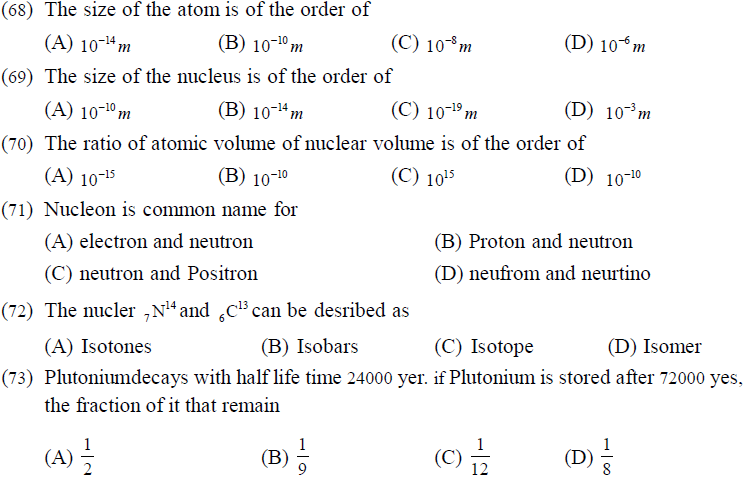 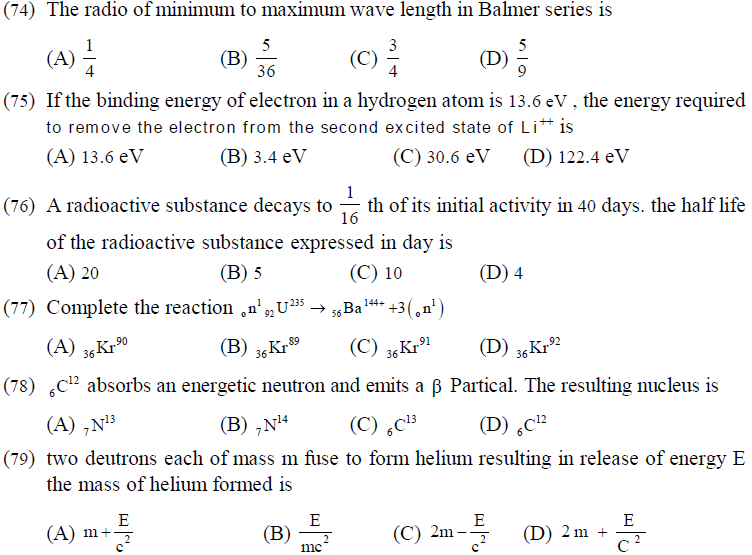 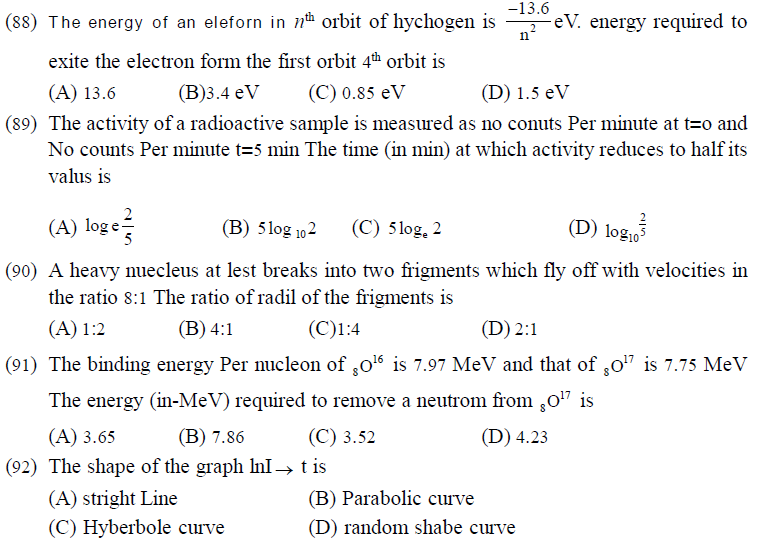 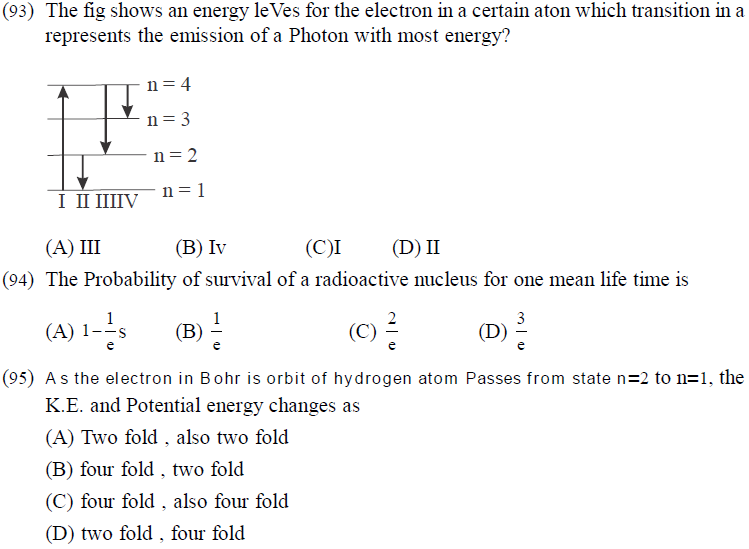 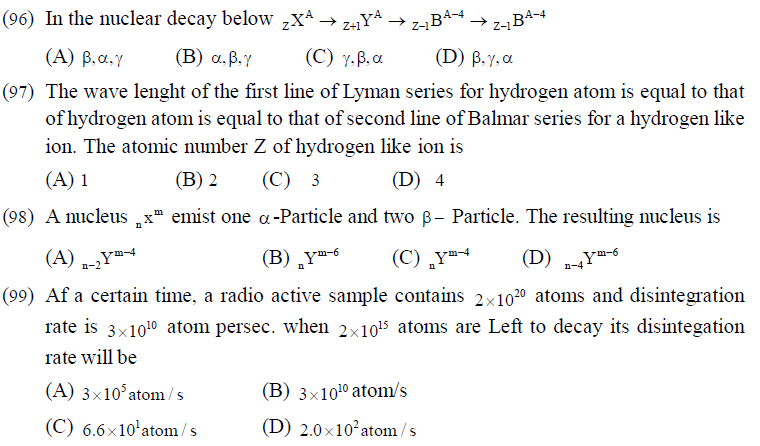 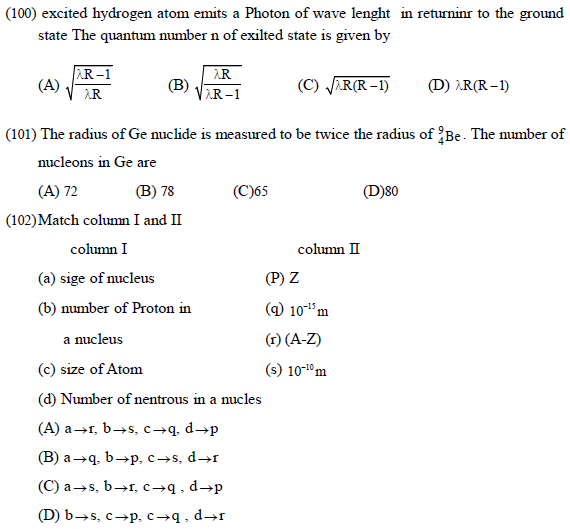 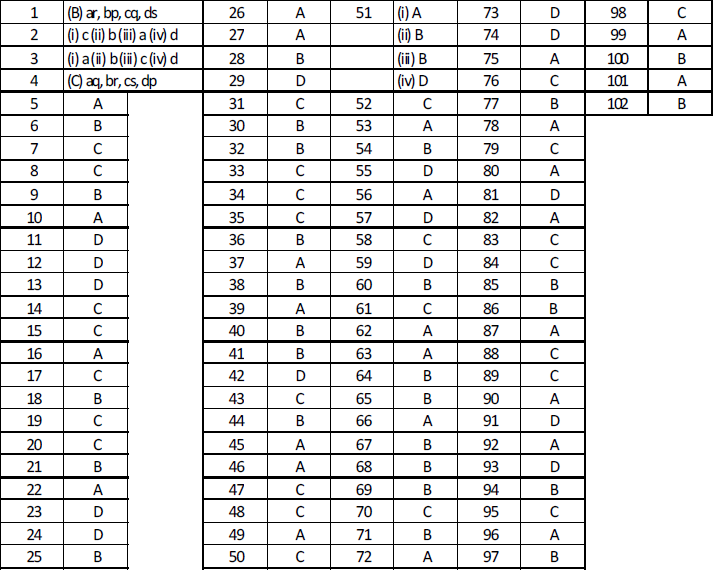