CBSE Class 9 Maths Areas of Parallelogram and Triangle MCQs Set B with answers available in Pdf for free download. The MCQ Questions for Class 9 Mathematics with answers have been prepared as per the latest syllabus, NCERT books and examination pattern suggested in Standard 9 by CBSE, NCERT and KVS. Multiple Choice Questions are an important part of Term 1 and Term 2 exams for Grade 9 Mathematics and if practiced properly can help you to get higher marks. Refer to more Chapter-wise MCQs for NCERT Class 9 Mathematics and also download more latest study material for all subjects

Class 9 Areas of Parallelogram and Triangle MCQ Questions with Answers

1. D, E and F are respectively the mid-points of the sides BC, CA and AB of a ΔABC, then ar (DEF)

2. D, E and F are respectively the mid-points of the sides BC, CA and AB of a ΔABC, then ar (BDEF)

5. ABC and ABD are two triangles on the same base AB. If line- segment CD is bisected by AB at O then ar(ABC) =

7. In the above sided Fig, P is a point in the interior of a parallelogram ABCD then ar (APB) + ar(PCD) =

8. In Fig, PQRS and ABRS are parallelograms and X is any point on side BR then ar (AX S) =

9. In Fig, PQRS and ABRS are parallelograms and X is any point on side BR then ar (ABRS) =

10. P and Q are any two points lying on the sides DC and AD respectively of a parallelogram ABCD then ar (APB) =

11. In the below figure, ABCD is trapezium in which AB || DC and its diagonals AC and BD intersect at O then ar(AOD) = 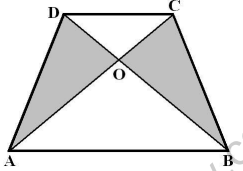 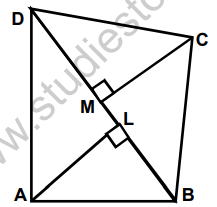 Download past year Question Papers for Class 9 Mathematics as per CBSE NCERT KVS syllabus with solutions in pdf free
More..

Download Free printable worksheets for Class 9 Mathematics designed by expert teachers for all important chapters and topics and is available for free download...
More..

Download free Printable Worksheets, test papers with questions and answers for Class 9 Mathematics for all important topics and chapters as per CBSE, NCERT,...
More..