Question. Select the incorrect option regarding the given figure. 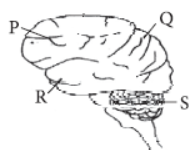 (a) Q is parietal lobe which registers sensory perceptions.
(b) P is occipital lobe which decodes and interprets visual information.
(c) R is temporal lobe which is associated with memory and emotion.
(d) S is cerebellum which controls muscular activities.

Question. The respiratory and cardiac centres are located in
(a) cerebrum
(b) diencephalon
(c) crura cerebri
(d) medulla oblongata.

Refer to the diagrammatic structure of a neuron and answer the questions from 39 to 43 given below.

Question. Which of the following is absent in mature neurons?
(a) Centrioles
(b) Rough endoplasmic reticulum
(c) Lysosomes
(d) Golgi apparatus

Question. Movement of shoulder muscle and bone is controlled by which nerve?
(a) Spinal accessory
(b) Vagus
(c) Glossopharyngeal
(d) Hypoglossal

Question. Read the given statements and select the option stating which ones are true (T) and which ones are false (F).
I. Ageing neurons contain a pigment made up of a residual bodies derived from lysosomes.
II. Axon and cyton contains numerous mitochondria, Golgi apparatus, lysosomes, etc.
III. Cyton depends on axon for supply of proteins synthesised by Nissl’s granules.
I II III
(a) T T F
(b) T F F
(c) F T T
(d) F F T

Question. One function of parasympathetic nervoussys tem is
(a) contraction of hair muscles
(b) stimulation of sweat glands
(c) acceleration of heart beat
(d) constriction of pupil.

Question. Which one of the following is the example of the action of the autonomous nervous system?
(a) Swallowing of food
(b) Pupillary reflex
(c) Peristalsis of the intestine
(d) Knee-jerk response

Question. Assertion : All of the cranial nerves are said to be mixed nerves.
Reason : Mixed nerves carry both sensory and motor nerve fibres simultaneously.

Question. Assertion : Some areas of the brain and spinal cord look white.
Reason : This is because cell bodies of neurons are situated in those areas.

Question. Assertion : The PNS comprises of all the nerves of the body associated with CNS.
Reason : PNS is the site of information processing and control.

Question. What is the function of neurons as specialised cells in animals?

Question. Give a specific term for each of the following.
(a) Gap between adjacent myelin sheaths.
(b) Bulb-like structure present at the axon terminal.
(c) A long dendrite extends from the cell body of a neuron.
(d) Chemicals released from a pre-synaptic neuron that interact with specific receptor sites of a post-synaptic neuron.

Question. What are the structures that protect brain?

Answer. The brain is protected by the skull. Inside the skull, the brain is covered by cranial meninges consisting of an outer layer called duramater, a very thin middle layer called arachnoid mater and an inner layer (which is in contact with the brain tissue) called pia mater.

Question. Which area of the brain is called as “emotional brain”?'

Answer. Certain components of the cerebrum and diencephalon constitute the limbic system. It is sometimes called the “emotional brain” because it controls emotional behaviour expressed in the form of joy, sorrow, fear, fight, friendship, liking and disliking.

Question. How are the left and right cerebral hemispheres connected?

Answer. The left and right cerebral hemispheres are connected by a large bundle of myelinated fibres called corpus callosum.

Answer. Insects have an organised nervous system with a brain along with a number of ganglia and neural tissues.

Question. What do grey and white matter in the brain represent?

Answer. The cerebral cortex is referred to as the grey matter due to its greyish appearance because of the colour provided by neuron cell bodies. The inner part of the cerebral hemisphere consists of fibres of the tracts covered with myelin sheath which give an opaque white appearance to the tissue and hence it is called the white matter.

Question. Compare the effect of sympathetic and parasympathetic nerves on the heart, blood vessels/pressure, liver and pupil.

Question. What do you understand by neural coordination in living organisms? Explain with an example why is it necessary.

Answer. Coordination is the process through which two or more organs interact and complement the functions of each other. The neural system provides an organised network of pointto- point connections for a quick coordination. It is necessary to maintain homeostasis. For example, when we do physical exercise, the energy demand is increased for maintaining an increased muscular activity. The supply of oxygen is also increased. The increased supply of oxygen necessitates an increase in the rate of respiration, heart beat and increased blood flow via blood vessels. When physical exercise is stopped, the activities of nerves, lungs, heart and kidney gradually return to their normal conditions.

Question. (a) Comment on the position and characteristic content of synaptic knob.
(b) What is motor end plate?
(c) What is the direction of impulse transmission in an axon?

Answer. (a) Synaptic knob is present at the axon terminal that contains mitochondria. It also contains synaptic vesicles that have neurotransmitters for nerve conduction. (b) Motor end plate is defined as the part of sarcolemma that lies beneath the axon terminals. (c) In an axon, nerve impulse are transmitted away from the cell body to a synapse or to a neuromuscular junction.

Answer. Differences between cranial and spinal nerves are as follows:

Question. Explain how the transmission of nerve impulse takes place at chemical synapse.

Answer.  Forebrain consists of olfactory lobes, cerebrum and diencephalon. Olfactory lobes are a pair of solid club shaped structures present on the inferior surface of cerebrum having an olfactory bulb and an olfactory tract for relaying sense of smell to temporal lobes. Olfactory lobes receive information about smell. In lower animals each olfactory lobe has a cavity called rhinocoel (1st ventricle). It is absent in human beings. Cerebrum is the largest and complex part. It consists of the left and right hemispheres connected by a bundle of myelinated fibres called corpus callosum. The left part of cerebrum controls the functions of right parts of the body while right part of cerebrum commands functions of left side of the body. The interior of each cerebral hemisphere contains a lateral ventricle (= paracoel, first and second ventricles) filled with cerebrospinal fluid. The two ventricles open into third ventricle by a common aperture called foramen of Monro. Diencephalon lies between cerebrum and mesencephalon. Its cavity is called third ventricle or diocoel. It communicates anteriorly with the lateral ventricles and posteriorly with iter. It contains epithalamus, thalamus and hypothalamus. Epithalamus is non – nervous part which is fused with piamater to form anterior choroid plexus. Just behind this the epithelium forms a short stalk called pineal stalk which has rounded body called pineal body. Pineal body is endocrine in function and secretes a hormone named melatonin. Epithalamus forms the roof of third ventricle. Thalamus forms the lateral walls of the third ventricle and directs sensory impulses from the lower parts of the brain and spinal cord to appropriate parts of the cerebrum. Just beneath the thalamus, hypothalamus forms the floor and the part of the lateral walls of the third ventricle. Hypothalamus links nervous system to endocrine system (via hypothalamus - hypophyseal axis) and exercises a regulatory control on the functioning of endocrine glands by secreting neurohormones. It contains higher centres of autonomic nervous system controlling hunger, thirst, sleep, fatigue, emotions, satisfaction, anger, pleasure etc.