Biology
Download PDF
Download HOTS questions and answers for Class 11 Biology. Read CBSE Class 11 Biology HOTs Cell Cycle And Cell Division below and download in pdf. High Order Thinking Skills questions come in exams for Biology in Standard 11 and if prepared properly can help you to score more marks. You can refer to more chapter wise Class 11 Biology HOTS Questions with solutions and also get latest topic wise important study material as per NCERT book for Class 11 Biology and all other subjects for free on Studiestoday designed as per latest CBSE, NCERT and KVS syllabus and pattern for Grade 11

Question. In which of the following stages terminalisation occurs?
(a) Zygotene
(b) Pachytene
(c) Diakinesis
(d) Diplotene

Question. The significance of mitotic division is
(a) it takes place where there is a need of increase in number of cells only
(b) it is the method of multiplication of unicellular organisms
(c) daughter cells and parent cells have the same number of chromosomes (2n)
(d) all of these.

Question. “G0” state of cells in eukaryotic cell cycle denotes
(a) check point before entering the next phase
(b) pausing in the middle of a cycle to cope with a temporary delay
(c) death of a cell
(d) exit of cells from cell cycle.

Question. Which of the following is a key event of anaphase of mitotic division?
(a) Chromosomes are moved to spindle equator and get aligned through spindle fibres to both poles.
(b) Centromeres split and chromatids separate.
(c) Chromosomes cluster at opposite spindle poles and their identity is lost as discrete elements.
(d) Both (b) and (c)

Question. Which is not true about mitosis?
(a) Mitosis is initiated after G1 phase.
(b) Crossing over does not take place.
(c) Parent cell produces two daughter cells.
(d) The two daughter cells have the same number of chromosomes as in the parent cell.

Ques. Identify the correct statement with regard to G1 phase (Gap 1) of interphase.
(a) DNA synthesis or replication takes place.
(b) Reorganisation of all cell components takes place.
(c) Cell is metabolically active, grows but does not replicate its DNA.
(d) Nuclear division takes place.

Ques. When cell has stalled DNA replication fork, which checkpoint should be predominantly activated?
(a) G1/S
(b) G2/M
(c) M
(d) Both G2/M and M

Ques. At what stage of the cell cycle are histone proteins synthesized in a eukaryotic cell?
(a) During G2 stage of prophase
(b) During S-phase
(c) During entire prophase
(d) During telophase

Ques. In the somatic cell cycle
(a) in G1 phase DNA content is double the amount of DNA present in the original cell
(b) DNA replication takes place in S phase
(c) a short interphase is followed by a long mitotic phase
(d) G2 phase follows mitotic phase.

Question. Mention about the synaptonemal complex.

Question. Complete the following sentences with suitable words.
(i) Chromosome condensation occurs during ________
(ii) _________ is marked by the alignment of chromosomes at the equatorial plate.
(iii) _________ is the equational division in which the chromosome number of the parent is conserved in the daughter cell.
(iv) Each parent cell has a pair of _________ chromosomes.

Question. Discuss about the attributes does a chromatid require to be classified as a chromosome.

Answer. In telophase-I of meiosis-I, chromosome number becomes half but the chromosomes are still composed of two chromatids. If crossing over occurred, these chromatids are not genetically identical. They divide in second meiotic division. Hence, crossing over is an attribute, which classify chromatids as chromosomes.

Question. Distinguish anaphase of mitosis from anaphase-I of meiosis.

Answer. Differences between anaphase of mitosis and anaphase-I of meiosis are as follows :

Question. Why do the chromosomes become short and thick in prophase?

Answer. The chromosomes become short and thick in prophase because it is physically easier for short and compact chromosomes to move through the cytoplasm than the very long and twisted interphase chromosomes.

Question. Both unicellular and multicellular organisms undergo mitosis. What are the differences, if any, observed in the process between the two?

Question. Give examples where the four daughter cells from meiosis are equal in size and where they are found unequal in size.

Question. In which phase of meiosis are the following formed?
(i) Synaptonemal complex.
(ii) Recombination nodules.
(iii) Appearence/activation of enzyme recombinase.
(iv) Terminalisation of chiasmata.
(vi) Formation of dyad of cell.

Question. How do cell stop dividing?

Question. Which stage of meiotic division last for years in some vertebrates. Explain some features of this stage. 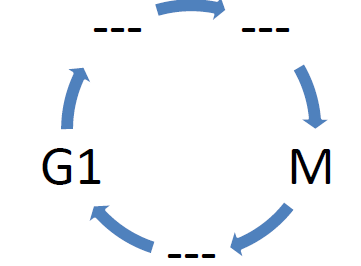