2. The point of intersection of x axis and y axis is called origin and denoted by ‘O’.

3. Cartesian plane is a plane obtained by putting the coordinate axes perpendicular to each other in the plane. It is also called coordinate plane or xy plane.

4. The x-coordinate of a point is its perpendicular distance from y axis.

5. The y-coordinate of a point is its perpendicular distance from x axis.

6. The point where the x axis and the y axis intersect is represented by coordinate points (0, 0) and is called the origin. It is denoted by ‘O’ on a Cartesian plane.

7. The abscissa of a point is the x-coordinate of the point.

9. If the abscissa of a point is x and the ordinate of the point is y, then (x, y) are called the coordinates of the point.

10. The axes divide the Cartesian plane into four parts called the quadrants (one fourth part), numbered I, II, III and IV anticlockwise from OX.

11. The origin O has zero distance from both the axes. 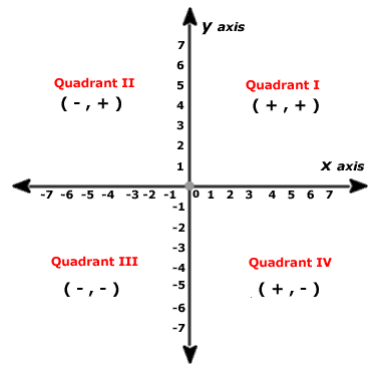 14. To plot a point P (3, 4) in the Cartesian plane. Start from origin count 3 units on the positive x axis then move 4 units towards positive y axis and mark the point P. 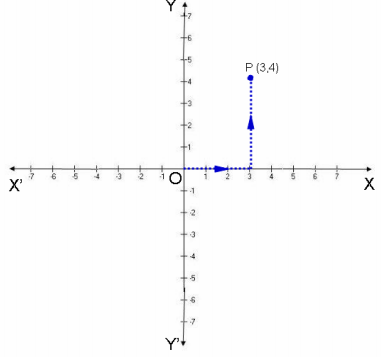 Access CBSE Class 9 Coordinate Geometry MCQs for MCQs for important topics for all chapters in MCQs based on CBSE and NCERT pattern. Access full...
More..