1. Are rotis made in your home? From which grains are they made?

Ans.Yes, rotis are made in my home. These are made of wheat or bajra grains.

2. Have you eaten roti made from bajra or jowar? How did you like these?

Ans.Yes, I have eaten roti made from bajra or jowar. They are tasty to eat.

3. In your house what is done to protect grains and pulses form insects?

Ans.In my house the grains and pulses are kept in air tight containers to protect them against insects.

4. Which are different festivals related to farming celebrated in different seasons? Find out more about anyone of such festivals and write in your notebook. The name of the festival, in which season it is celebrated, in which states of India, what special food are made, is it celebrated only at home with the family, or together with many people.

Ans.The different festivals related to farming that are celebrated in the different season are Basant Panchami, Holi, Lohri, Baisakhi etc.

5. Talk to the elders in your family and find out if there were some special foods cooked earlier, that are not cooked anymore?

Ans.After talking to the elders of my family I found that there were no special food items which were made earlier and are not made any more.

6. Find out about the crops – cereals, vegetables, pulses that are grown in your area. Of these, is there anything that is famous across the country.

Ans.The crops grown commonly in our area are -Wheat, bajra, mushrooms, jowar etc. Out of these mushrooms is well known everywhere.

7. Can you identify these grains

Ans.Yes, I can identify these grains. These are

8. The bajra seed saw differences in the way Damjibhai and Hasmukh did farming (for example in irrigation, ploughing etc.) What were these differences.

Ans.The differences in the way Damjibhai and Hasmukh did farming as noticed by the bajra seed are as follows:

Dhamjibhai used to grow different kinds of crops – grains and vegetables according to the season. He used to keep enough for his family and sold the rest to the shopkeepers from the city. Sometimes he also grew some cotton. Also each year, he used to keep aside some seeds. But his son Hasmukh did farming with a lot of differences. He bought new and modern equipment for farming. He put an electric motor to pump water, a tractor to plough the field. He bought new varieties of seeds from the market, these were easily affected by harmful insects. He used expensive fertilizers. He used to grow mainly those crops which could be sold in the city to get a lot of profit. All these materials and equipment were very expensive and whatever profit he earned from the city was used up to reply the loans taken by him for the expensive machines and equipments.

9. Hasmukh said, “With profits from our fields, we can progress”. What is your understanding of ‘progress’?

Ans.By progress, we understand, a better and improved standard of living, a good place and house to live, better and good standard of food, better also those for entertainment like TV, radio etc. But besides all these earning a high respect is a progress in real sense.

10. What kind of progress would you like to see in your area?

Ans.I would like to see the following type of progress in my town on area:

11. What can happen to Hasmukh’s farm after some years?

Ans.As there was a lot of loss to Hasmukh’s due to farming and it had become difficult for him to repay the bank loans. Thus, it seems after some years there would not be any agricultural activity on his farms.

12. Damhibhai’s son Hasmukh chose to become a farmer like his father, Hasmukh’s son Paresh is not a farmer, but a truck driver. Why would he have done so?

Ans.Paresh observed that his father was in great loss. Even the bank loans were yet to be repayed. Also, farming had become very expensive. Therefore, in order to repay the bank loans and earn better he started working as a truck driver.

13. The seeds were not sure that what Hasmukh was talking about was really progress? What do you feel?

14. Have there been any changes near your area, which may be difficult to call ‘progress’? What changes are these? What are the different opinions about them?

Ans.Yes, there have been many changes around my area, which have been done for progress but there are some losses associated with them due to which it is difficult to call them progress.

For example: (1) Increased transportation has made it easier to reach to far off places. But it results in a lot of pollution which cause serious health problems.

(2) A lot of electric machines and equipment have been made for many household works such as for washing clothes, cutting vegetables, cleaning the houses etc. These help us to finish our work in less time and does not require such labour. But this can cause obesity, joint problems because these do not follow us to do any physical exercise and also make us lethargic.

(3) With the help of computers, many time consuming jobs can be finished in a very short time but this has taken the jobs of many people.

15. What question come to your mind about farmers and farming? Write some questions in your group and ask a farmer. For example, how many crops do they grow in a year. Which crop needs how much water?

Ans.Some of the questions and their answer as asked from a farmer:

Student: Since how long are you farming?

Farmer: I have been farming for about 15 years.

Student: What and how many crops do you grow usually in a year?

Student: Which crop needs a lot of water?

Student: Do you use the factory made fertilizers?

Farmer: Yes, I use factory made fertilizers.

Student: From where you get the seeds? Do you store some seeds for next year?

Farmer: Sometimes, I get the seeds from the market and sometimes I store some seeds also for the next year.

16. Visit a farm near your area. Observe and talk to the people there. Write a report.

Ans.Somedays back I went to my friend’s farm in Panipat along with few of my friends. It was one of the best places I had ever been to. As we entered the farm, the view was very beautiful. The entire farm was fanced with pink bougainvillea flowers and tall coconut trees. There was a wide variety of plants such as, those of lemon, oranges, spinach, raddish, coriander etc. We could not resist, when we saw fresh carrots rooted in the soil. We uprooted few of them. We were told by the farmers working there, that all these plants have been grown without using any artificial fertilizers. He has been using earthworms for this purpose. These earthworms dig the soil and make it soft and crumbly which is good for the plants. The dead plants, leaves, stems, fruits are buried in a pit and earthworms are allowed to enter and these automatically convert the waste into manure. This natural manure is very rich in minerals and good for the soil. We enjoyed the visit and also get to learn many things.

17. What can you see in each picture on the next page?

Ans.In this picture 1 – bajra crops can be seen. A lady is separating and taking out the cobs from the bajra crops.

In this picture 2 – The bajra cobs are put in a mustard (okhli, used for crushing). The cobs are crushed with a pestle (moosli) and the seeds are separated from the cob

In this picture 3 – The separated seeds are seen. Today this work is also done by big machines like threshers.

18. What technology could have been used to cut the stem?

Ans.The stem is cut in picture 1 by the help of big knife or cutter.

19. What do you think is being done in the grinder (chakki) in picture 4?

Ans.Here the grinder is being used to grind the bajra seeds and obtain the bajra powder. 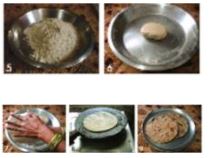 In picture 6 – The bajra flour is converted into a dough by using water.

In picture 7 – The bajra chapatis are been prepared.

In picture 8 – In this picture the bajra chapati I being prepared on the tawa.

In picture 9 – The ready bajra chapatis are being shown in a plate. Sieve would have been used in picture 5 to separate the flour and the seek husk.

21. There have been many changes in our food. What can this mean? Use the seed story and what you know from elders to explain.

Ans.There have been many changes in our food such as:

(i) Earlier people used to eat a variety of foods like bajra, jowar, wheat etc. but now we are eating mainly wheat.

(ii) Earlier the old seeds were stored and grown in the next year. Now a days new varients of seeds are grown and their products are quite different in taste.

(iii) Earlier the foods were eaten in very simple forms, not very much spicy and over heated.