1. What do you think the earth looks like? Make a drawing of the earth in your notebook. On your drawing show where you are. Take a look at your friend’s drawings too.

Ans. I think the earth is round. 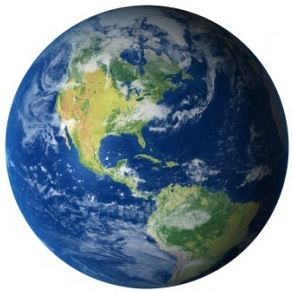 2. If the earth is round like a globe, how is that we do not fall off?

Ans. It is due to the earth’s gravitational force. Earth attracts everything towards its centre. That is why we do not fall off.

3. Do not people in Argentina stand upside down?

Ans. No, they are not. They are also standing upright. There is actually no ‘up’ and ‘down’ on the earth. It is relative.

4. Can you think why Sunita’s hair was standing?

5. Look at Sunita’s photographs and the dates written on each of them. Write what all is happening and when?

6. Can you now say why Sunita’s hair kept standing?

Ans. Sunita’s hair kept standing because there is no gravitational pull in the space.

Ans. Water flows downwards on any slope or on mountains due to the gravitational force acting upon it.

8. Take a 5-rupee coin and a small piece of paper. The paper should be about one-fifth the size of the coin.

1. Hold the coin in one hand and the paper in the other. Drop them at the same time. What happened.

2. Now place the tiny paper on the coin and drop them. What happened this time? Surprised?

Ans. 1. Both fall down but the coin has fallen quickly.

2. Now, both fall down together, at the same time.

9. To play this you will need a small stone, a bigger stone, a thick roll of paper (which can be made by with layers of paper), mouse and an elephant made of paper.

Take a string about 2 feet long.

At one end of the string tie the small stone. Stick or tie the mouse to the stone.

Put the string into the roll of paper.

At the other end of the string tie the bigger stone and stick the elephant.

Hold the roll of paper and move your hand to rotate the small stone.

Who is pulling whom? You will be surprised! The mouse lifts the elephant!

How did this magic happen?

Ans. When the small stone (mouse) whirls, it create a force due to which the bigger stone (elephant) is pulled up.

Ans. Yes, but not so clearly.

11. Can you recognize any other place.

Ans. It is very difficult to recognize any other place exactly.

Ans. The blue part of the picture is sea.

13. Do you find anything similar between the globe and this picture of earth? In what way are they different?

Ans. The similarity is both the cases the land and the sea areas can be distinguished. However, the entire land area is divided into various countries on the globe which is not so in case of this picture of the earth.

14. Do you think Sunita could make out Pakistan, Nepal and Burma separately when she saw the earth from space?

Ans. The blue parts of the globe are seas.

17. Which countries can you see?

18. Can you see some of the countries with which India plays cricket matches? For example: England, Australia, Pakistan, Bangladesh and South Africa.

Ans. Yes, I can see all these countries.

Ans. Yes, I live in Delhi and I can find my state in the map.

20. Which are states next to your states.

Ans. Delhi is an between Haryana and Uttar Pradesh.

21. Have you been to any other state?

Ans. Yes. I have been to many states like Uttar Pradesh, Haryana, Punjab, Himachal Pradesh etc.

22. Shahmir thinks that there are lines drawn on the ground, between the states. What do you think?

Ans. There is no such line made on the ground, between the states. It’s all on the map only.

23. Why don’t you try to do the same with a coin? How many centimetres away from the eye did you keep the coin to hide the moon?

Ans. To hide the moon completely, the coin has to kept at 25 centimetres away from the eye.

24. Do you think you try to do the same with a coin? How many centimetres away from the eye did you keep the coin to hide the moon?

Ans. To hide the moon completely, the coin has to be kept at 25 centimetres away from the eye.

Ans. The next full moon is on 15th of this month. That day the moon will rise a little rate – at round 9.00 pm. The moon will look spherical on this day.

26. What are the festivals related to the moon?

Ans. There are many festivals related to the moon like Eid, Karwachauth etc.

27. At night look at the sky carefully for 5 minutes. What could you see?

Ans. I could see the moon, stars etc.

28. Did you see anything moving in the sky? What do you think it could be? A star or a shooting or a satellite (satellites are used for the TV, telephones and for weather reports). Find out more about this.

29. If you saw the moon rising at 7 pm today, would you see it at the same time tomorrow?

30. On 31 st October the time of setting of the moon given as 12:03. Have you ever seen the moon at 12 in the afternoon? Why don’t we easily see the moon or stars during the day?

Ans. No, I have never seen at 12 in the afternoon. We don’t early see the moon or stars during the day because of the sunlight.

31. See how the earth is looking. Can you see the surface of the moon? Do you have some questions after looking at this picture? Write down those questions and discuss them in the class.

Ans. The earth is looking spherical in shape. Yes, I can see the surface of the moon. The following questions arise in my mind after looking at this picture:

(i) Who look this picture?

(ii) Is there any life on the moon?

(iii) Whether we can see different countries on earth from the moon?

32. Why do children always slide down the slide and not slide up? If this slide where there in Sunita’s space, would children slide like this? Why?

Ans. Children always slide down the slide because of the earth’s gravitational force. However, if this slide were there in Sunita’s spacecraft, children would not slide like this because there is no gravitational force in the space.

33. Why do we see stars mostly at night?

Ans. Stars are mostly seen at night because there is no sunlight in the night. Thus, the light coming from the stars could reach us and we are able to see them.

34. Looking at earth from space, Sunita said, “Different countries cannot be seen as separate from her. These lines are on paper. They are made by us. What do you understand by this?

Ans. Sunita wanted to say that the land on earth is divided in the different countries just on paper. It is actually in our mind. There is no such differentiation in reality. Earth is all intact. So, looking at earth from the space, the earth looks quite different.