CBSE Class 7 Social Science Sample Paper Set U.Sample Papers are the very important for every student. The sample papers should be practiced to gain extra marks in examinations. The sample papers have been prepared based on summative assessment1 and summative assessment 2 pattern. The sample papers have been prepared based on pattern of last year examinations and as per latest changes in the syllabus. Students, teachers and parents can download all CBSE educational material and very well prepared worksheets from this website.  All CBSE educational material is developed by our panel of teachers, have also been submitted by CBSE teachers and students.

vi) The _________ festival was celebrated with great enthusiasm in Vijaynagar. (navratri / baisakhi)

Q.2 a) Identify the following places with the help of the clue given. 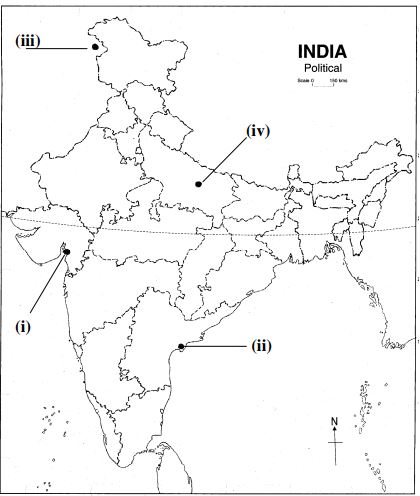 (i) A chief port under the Mughals in Gujarat

(iv) A place where Kabir was brought up and is also famous as a pilgrimage centre b) Identify and arrange the following from upper course to lower course of a river.

into intricate designs on black metal

Q.4 Give one word answer for each of the following from the clue given below. (1×6=6)

ii) A philosophy which is based on devotion to God through the attainment of knowledge. (DWAAITA ILSPPHOOHY)

iv) An organisation which bound the sikh misls together. (ADL KLHAAS)

i) Two types of landforms formed by the action of winds.

i) Rivers of the Ganga-Brahmaputra basin flood frequently.

ii) Large scale industries have not developed in Ladakh.

iii) There was rapid urban growth around the temples.

iv) Bankers and moneylenders became powerful in Bengal and Awadh.

v) Biodiversity vary as we go from the equator to the poles.

i) What is meant by veld? Explain why crops do not flourish in the veld.

ii) What is weathering? How does it differ from erosion?

iii) How were Hundis used? What was the advantage of using them?

iv) Explain how the nobles caused problems for the later Mughals.

vi) A woman who stays at home does not help her family financially. Do you agree with this statement? Why ?

i) List the principles that are usually included in codes of media ethics.

iii) Describe the formation of a delta.

iv) Write about the main teachings of Guru Nanak.

v) Explain why there was rapid urbanization at administrative centres.

vi) What ill effects could the destruction of the Amazon forests produce?