1 Where is the worlds deepest mine situated?

2 State any one of the common earthquake prediction methods.

3 Name the gas which is responsible for global warming.

4 State the specialisation of ENT doctors.

Ans: Every person is equal before the law irrespective age, caste, religion, sex or position

Ans: as they gained power and wealth, they declared themselves independent.

8 Under whose rule did Delhi become an important commercial centre?

9 Who was Abul Fazl?

Ans: Abul Fazl was one of Akbar’s close friends and courtiers wrote a three volume

Main composition is silica and

Main composition is silica and magnesia

11 Identify the feature in the given diagram and explain its formation. 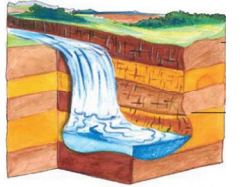 b. The running water in the river erodes the landscape. When the river tumbles at steep angle over very hard rocks or down a steep valley side it forms a waterfall

Ans: Permanent or Planetary Winds: These winds blow constantly throughout the year in a particular direction. These winds are broadly classified as: -

2. Seasonal or Periodic Winds: These winds change their direction in different seasons.

The best example is "Monsoon Winds".

3. Local Winds: These winds blow only during a particular period of the day or year. For example, land and sea breeze. These winds bring short time changes in the weather conditions over a smaller area. Some of the examples are: -

(a) Chinook: Chinook means 'snow eater'. These winds are strong, warm and dry. They blow in North America.

(b) Loo: These are hot and dry winds which, blow during the summer season in the northern part of India.

13 What kind of Public health services are available at the village level, district level and in cities?

Ans: 1. At the village level there are health centres where there is usually a nurse and a village health worker. They are trained in dealing with common illnesses and work under the supervision of doctors at the Primary Health Centre (PHC). Such a centre covers many villages in a rural area.

2. At the district level is the District Hospital that also supervises all the health centres.

3. Large cities have many government hospitals.

14 Evaluate the objective of Wall paper project and also state its advantages.

Ans: Objective: it is an interesting activity to display one’s thought for a particular topic of interest.

Advantage: a. it helps in building up a strong team work

b. also help in encouraging the participant to express their view point on a particular issue

Ans: Even though there is equality among people in India yet poverty and the lack of resources continue to be a key reason why so many people’s lives in India are highly unequal.

For example— · The increasing privatization of health services and the neglect of government hospitals have made it difficult for most poor people to get good quality health care. These people do not have the resources to afford expensive private health services.

· The man who sells juice does not have the resources to compete with all of the major companies who sell branded drinks through expensive advertising.

Discrimination on the basis of a person’s religion, caste and sex is another significant factor for why people are treated unequally in India.

16 Give some reasons for the displacement of people from one place to another.

Ans: 1. When dams are built or forest areas declared sanctuaries for animals, thousands of people are displaced. Whole villages are uprooted and people are forced to go and build new homes, start new lives elsewhere. Most of these people are poor.

2. In urban areas too, bastis in which poor people live are often uprooted. Some of them are relocated to areas outside the city.

3. Their work as well as their children’s schooling is severely disrupted because of the distance from the outskirts of the city to these locations. This displacement of people and communities is a problem that has become quite widespread in our country.

17 Explain the administrative divisions of the Chola Empire.

Ans: 1. Settlements of peasants, known as ur, became prosperous with the spread of irrigation agriculture.

3. The village council and the nadu had several administrative functions including dispensing justice and collecting taxes.

4. Rich peasants of the Vellala caste exercised considerable control over the affairs of the nadu under the supervision of the central Chola government.

1. All those who wish to become members of the Sabha should be owners of land from which land revenue is collected.

2. They should have their own homes.

4. They should have knowledge of the Vedas.

5. They should be well-versed in administrative matters and honest.

19 What kind of irrigation works were developed in Tamil region under the reign Chola ruler?

(i) the river Kaveri deposits fertile soil on the banks. Water from the channels also provides