1 “You made us low caste, why don’t you face that fact, Great Lord?...”Identify the marathi saint who composed this hymn.

2  I was announced as the best automobile brand in India for the year2014. Who am I?

3  Who won the best Abby award for the year 2014 for Best use of branded content?

4  Recall the name of the product from this tagline,”Daag acche hain”

5 After the 16th December 2012 inhuman incident that took place in Delhi a law was passed by S C verma ,former Chief Justice of India, in 2013 for women protection . Name the law.

6. “Women are the real architects of the society”, and to honour them international women day is celebrated. On what day it is celebrated?

8 What percent of ocean water and fresh water is found on the earth’s surface? 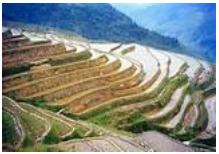 Identify the type of farming being practiced in the picture and name any one tropical region where it is practiced.

10 The English emerged as the most successful commercial and political powers in the seventeenth century in the sub continent. In this reference answer the following question:

b) List the goods which were in demand in Europe and West Asia. How did it affect the Indian craftsperson?

Ans: The demand for goods like textile and spices expanded the trade relation. This period saw the decline of Indian craftsmen as now they began to work on a system of advances which meant they had to weave cloth which was already promised to European agents as per their designs and patterns.

11 Discuss the contribution of Sant Tulsidas and Surdas in the development of new religions in north India?

Ans: Tulsidas and Surdas accepted existing beliefs and practices but wanted to make them accessible to all.

Surdas was ardent follower of Krishna and he composed sur sagar, sursaravalli and sahitya lahiri to express his devotion.

12 Recall the three overlapping groups that existed in the states of 18th century.

Ans: • States that were old Mughal provinces like awadh, Bengal and Hyderabad were powerful and independent, the rulers of these states did not break ties with Mughals.

•  States that enjoyed considerable independence under the Mughals as watan jagirs. These included Rajput principalities.

•  States under the control of Marathas , Sikhs and other like the Jats had seized their.

a) Look at the picture and recognize this invader.

b) How do the contemporary observers describe him.Nadir Shah, the Iranian ruler.

Ans: Contemporary observers describe him as the main contributor in devastation Delhi He looted the wealth of Delhi from the Mughal treasury. He also took the famous Peacock throne. The new city Shahjanabad was ruined by him.

14 Why is it so that SC and ST girls leave school at a higher rate?

Ans: There are several reasons why children from Dalit, Adivasi and Muslim communities leave school.

• In many parts of the country, especially in rural and poor areas, there may not even be proper schools or teachers who teach on a regular basis.

• If a school is not close to people’s homes, and there is no transport like buses or vans, parents may not be willing to send their girls to school.

• Many families are too poor and unable to bear the cost of educating all their children. Boys may get preference in this situation.

15 Advertisement are important part our social life. Analyze the statement.

Ans: We watch advertisements, discuss them and often judge people according to the brands they use.

Using branded products is a style statement and largely effect our mindset. Mothers who are unable to use branded soap start feeling that they are not giving their children best care. It influence the ways in which we value a person.

16 What is advertising. State any two of its objectives.

• To persuade- the advertisers try to convince the people in many ways for patronizing their products and services.

18 Explain how chain of market is formed. Can you think of any one benefit of this market system?

Ans: The connecting link between producer and consumer is traders.

The wholesale trader first buy the goods in bulk. These will then be sold to other traders. The trader who finally sells goods to consumer is the retailer.

Benefit: each outlet in the chain offers its own specialised services and charges are reflected in the price of goods.

19 Draw a neat label diagram of neap tide and also explain about its occurrence.

Ans: When the moon is in its first and last quarter, the ocean waters get drawn in diagonally opposite directions by the gravitational pull of sun and earth resulting in low tides. These tides are called neap tides.

20 Distinguish between permanent and temporary settlement by giving three points of difference.

Settlements where the people build

21 Highlight at least three features to explain the physiography and climatic conditions in Ganga – Brahamputra basin.

Ans: the main features are:

•  The plains of the Ganga and the Brahmaputra, the mountains and the foothills of the Himalayas and the Sundarbans delta are the main features of this basin.

•  The area is dominated by monsoon climate.

• The monsoon brings rains from mid-June to mid-September.

The summers are hot and the winters cool.

22 a. It lies on the delta of the Krisna river

b. English and dutch wanted to establish settlement here as it beame the important port on the Andhra Pradesh

d. It is a small town but populous, unwalled, ill built and worse situated; within all the springs are brackish

• Insisted caste, gender or creed is irrelevant for liberation

• He used nam, dan and isnan to preach

24 a. Enlist any three causes for the downfall of Mughal empire

• Weak successors:- aurangzeb’s successors were weak. Under the efficiency and effectiveness of the imperial administration it almost broke down

** other causes are also accepted.

b. How did Saadat Khan try to decrease the Mughal influence in the Awadh region?

Ans: By reducing the number office holders. He also reduced the size of jagirs and appointed his own loyal servants to vacant positions..the accounts of jagirdars were checked to prevent cheating and revenue from all districts were reassessed.

a. What are dowry deaths?

Ans: the young brides being murdered by their in –laws or husbands, greedy for more dowry.

Why do the parents give dowry?

Ans: to ensure happiness and security to the girl

c. State any three ways to raise voice against this practice.

Ans: Campaigning: well organized action for seeking some change Raising awareness:- girls shouls should be aware of their rights and should not tolerate any form of injustices.

Protesting- going on mass protestation on streets to make their voices heard by the authorities.

26 “Buying and selling can take place without going to a market place” Analyse the statement by giving an example.

Ans: This statement is true at present scenario of new trend of marketing Anyone can place an order for variety of things through the following ways:

•Teleshopping: they advertise the products through electronic media