a) Balban introduced the Persian custom of _______ in his court.

b) The Mughal empire reached to its largest extent under _______.

f) Members of caste which face social discrimination in India called themselves ______.

a) Buland Darwaja      i) Irrigation Dam

a) Kilimanjaro is ai)

b) Which of the following would you find in a cyclone ?

iii) low pressure at centre iv) none of these

c) Convectional rainfall is most common in the

d) The Delhi sultanate lasted from

e) Who among the following was not a relative of Babur?

f) Indo-Islamic architecture avoided the use of –

g) A unicameral legislatue does not have –

Q.4 Identify the personality and the monument and write a relevant sentence. (2×2=4)

a) Permanent pressure belts of the world.

b) Layers of the atmosphere.

a) The amount of water vapour present in the atmosphere

b) The physical and biological conditions in which an organism lives.

c) A group of 40 Turkish slave officers organised by Iltutmish.

d) The proposal to pass a new law or to change an existing one.

a) The harbor of London does not freeze during winter.

b) Vidhan Sabha is more powerful then Vidhan Parishad.

c) The loss of Qandahar was a setback for the Mughal empire.

Q.9 In the given outline map of India, identify the following : 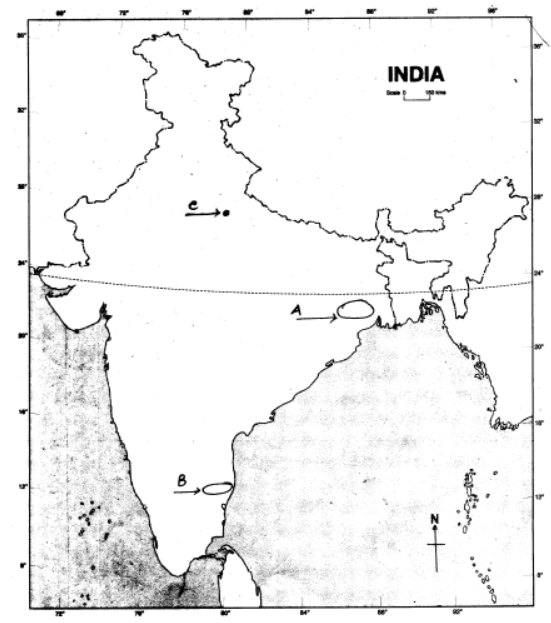 B – a powerful kingdom under Rajaraja 1

C – an area that led to tripartite struggle

(ii) In an outline map of world, locate the following :

a) What are fossils? Give examples.

b) Who were the barids? What were their jobs?

c) What do you understand by ruling party and opposition party?

d) What is the meaning of Suyurghal? Who usually receive these?

e) What is an assembly constituency? How many representatives can each constituency elect to the state legislature?

a) How does the upper mantle differ from the lower mantle?

b) How does humidity vary from place to place and from time to time?

c) Mention three problems faced by the Sultans of Delhi.

e) Name a scheme that the Indian government runs to promote social equality. How does it help reduce caste discrimination?

f) What are the functions of the presiding officer of a legislative assembly?

i) Describe the layers of the atmosphere nearest to the earths surface.

ii) How do ocean currents modify the climate of coastal regions? Give one example.

iii) What are sedimentary rocks? Explain how they are formed.

b) Answer the following questions in detail. (any two)

i) Discuss the economic measures adopted by Ala-ud-din Kalji as part of his Mongol policy.

iii) Mughal architecture reached the peak of its glory under Shah Jahan. Justify this statement.

c) Answer any one question briefly.

i) How are MLCs of a state elected?

ii) Explain the significance of the Indian citizen’s right to equality.

Q.13 Read the passage carefully and answer the questions given below.

Humans now use about 45 times as much water as they did three centuries ago.

Both surface water and ground water are getting depleted because we are using up water faster then nature can replace it.

Pollution of water is harmful for man and other organism Domestic wastes, untreated sewage and industrial wastes including harmful compounds of metals such as lead, pollute water. Minerals oils from spills, and dissolve salts also pollute water.

Drinking contaminated water may cause disease such as Cholera and typhoid.

a) Give one reason why surplus and ground water are getting depleted? (1)

b) What kind of diseases are caused by drinking contaminated water? (1)

c) Suggest any two measures to prevent water from getting polluted.