Download printable Other Subjects Class 11 Worksheets in pdf format, CBSE Class 11 Painting And Sculpture Pre Historic Rock Paintings Worksheet has been prepared as per the latest syllabus and exam pattern issued by CBSE, NCERT and KVS. Also download free pdf Other Subjects Class 11 Assignments and practice them daily to get better marks in tests and exams for Grade 11. Free chapter wise worksheets with answers have been designed by Standard 11 teachers as per latest examination pattern

Class 11 Other Subjects students should refer to the following printable worksheet in Pdf for Painting And Sculpture Pre Historic Rock Paintings in Grade 11. This test paper with questions and solutions for Standard 11 Other Subjects will be very useful for tests and exams and help you to score better marks

The distant past when there was no paper or language or the written word, and hence no books or written documents, is called prehistory, or, as we often say, prehistoric times. How people lived in those times was difficult to surmise until scholars began to discover the places where prehistoric people lived. Excavation at these places brought to light old tools, pottery, habitats, bones of ancient human beings and animals, and drawings on cave walls. By piecing together the information deduced from these objects and the cave drawings, scholars have constructed fairly accurate knowledge about what happened and how people lived in prehistoric times.

When the basic needs of food, water, clothing and shelter were fulfilled people felt the need to express themselves. Painting and drawing were the oldest art forms practiced by human beings to express themselves, using the cave walls as their canvas. They may have drawn and painted to make their homes more colourful and beautiful or to keep a visual record of their day-to-day life,

A sand stone rock shelters with in a hundred-mile radius of the city Bhopal, Biyapura village in Raisin Dist., MP. It is interesting to know that the first discovery of rock paintings was made in India in 1867–68 by an archaeologist, Archibold Carlleyle, twelve years before the discovery of Altamira in Spain. Cockburn, Anderson, Mitra and Ghosh were the early archaeologists who discovered a large number of sites in the Indian sub-continent.

The caves of Bhimbetka were discovered in 1957–58 by eminent archaeologist V.S. Wakankar and later on many more were discovered. Wakankar spent several years in surveying these inaccessible hills and jungles to study these paintings. 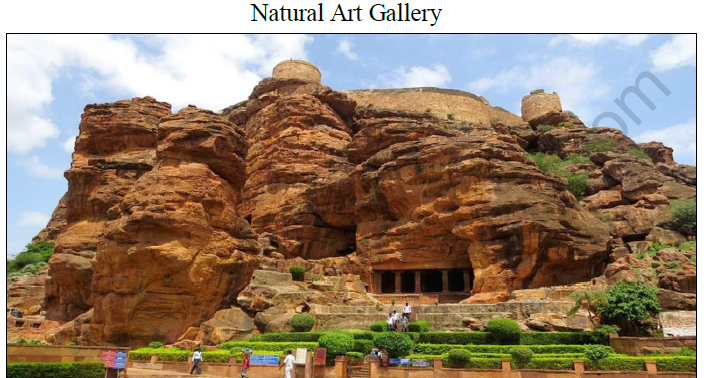 The themes of paintings found here are of great variety, ranging from mundane events of daily life in those times to sacred and royal images. These include hunting, dancing, music, horse and elephant riders, animal fighting, honey collection, decoration of bodies, and other household scenes.

The artists of Bhimbetka used many colours, including various shades of white, yellow, orange, red ochre, purple, brown, green and black. But white and red were their favourite colours. The paints were made by grinding various rocks and minerals. 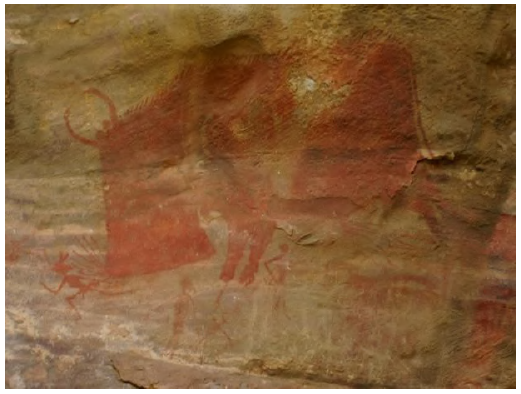 • Medium-Soft Stone
• Mixed with Animal fat
• On the ceiling and also of semi open rock shelters
• Drawn without any preparation
• 20 cm length and9.85 MT height
• Large bore like animal with two crescentic horn a large Animal is mithetacal with two horns
• Two Human figures here its fore legs
• Animal looking like in pain

Description: In this painting, a bison in red has been shown in big size and a group of people in small size has been shown hunting that bison. In this process, some injured people have also been depicted lying scattered on the ground and a few people watching them helplessly 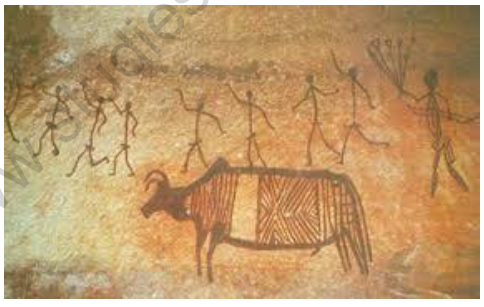 (A man who has mythical power)

• Medium –Wooden Charcoal
• Period -1500 BC
• The emotional experience of fear, worship and propitiation
• The animal will be decorated before sacrifice
• The wizard had an important roles in community
• The wizards are wearing different types of heard masks
• Horn Mask
• Fathered horn mask

Download Worksheets for Class 11 Other Subjects made for all important topics and is available for free download in pdf, chapter wise assignments or booklet...
More..

Download Printable Worksheets, test papers for Class 11 Other Subjects with questions answers for all topics and chapters as per CBSE, NCERT, KVS sylabus
More..