Download printable Other Subjects Class 11 Worksheets in pdf format, CBSE Class 11 Painting And Sculpture Buddhist Jain And Hindu Art Worksheet Set B has been prepared as per the latest syllabus and exam pattern issued by CBSE, NCERT and KVS. Also download free pdf Other Subjects Class 11 Assignments and practice them daily to get better marks in tests and exams for Grade 11. Free chapter wise worksheets with answers have been designed by Standard 11 teachers as per latest examination pattern

Class 11 Other Subjects students should refer to the following printable worksheet in Pdf for Painting And Sculpture Buddhist Jain And Hindu Art in Grade 11. This test paper with questions and solutions for Standard 11 Other Subjects will be very useful for tests and exams and help you to score better marks 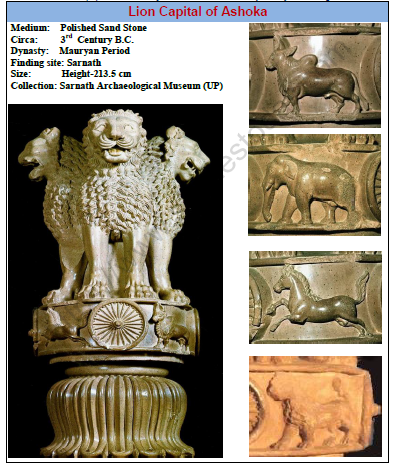 Description: The Lion Capital of Ashoka is a sculpture of four ‘Indian Lions’ standing back to back. It was originally placed atop of the Ashoka pillar at Sarnath, in the state of Uttar Pradesh, by Emperor Ashoka, circa 250 B.C. The pillar, sometimes called the Ashoka Column, is still in its original location, but the Lion Capital is now in the Sarnath Museum.

This Lion capital of Ashoka from Saranath has been adopted as the National Emblem of India and the wheel ‘Ashoka Chakra’ from its base was placed onto the centre of the National Flag of India.

The lion capital carved out of a single block of polished sandstone is more than two meters (7ft) in height. It comprises of four Indian/Asiatic Lions, placed back to back on a round slab called abacus. The abacus is supported by a bell shapedinverted- lotus base. On the side of the abacus are carved high relief sculptures of four animals - an elephant, a galloping horse, a bull, and a lion moving in a clockwise manner. These animals carved with great skill alternate with four smaller 24 spokes dharma chakras or wheels of law.

The capital was believed to be crowned by a 'Wheel of Dharma’ (Dharma Chakra) popularly known in India as the ‘Ashoka chakra’, which has now been lost. The figures of four majestic lions which are sticking their backs and facing four different directions - East, West, North and South - have been shown as the guard of the country, standing ever in alert position on their front legs. The four lions on top are highly symbolic and stylized with a very little hint of naturalness. This is clear in the hair carved along with neck as little flame-shaped bunches and the upper lip of the lions shown by three slit/cut lines. The magnificent modelling gives them great power and dignity. Surprisingly, compared to the majesty of the lions, the animals on the abacus are done with great naturalistic energy and are defined carefully. Petals of the lotus have rhythmically cut/slit curves and contours. The surface of these pillars has a mirror-like finish. It also reveals the aristocratic and international nature of the Mauryan Art.

The great symbolism of the greatest Buddhist virtues along with the great masterly skill of sculpting of this piece of art deserved to be a national identity of the great nation. 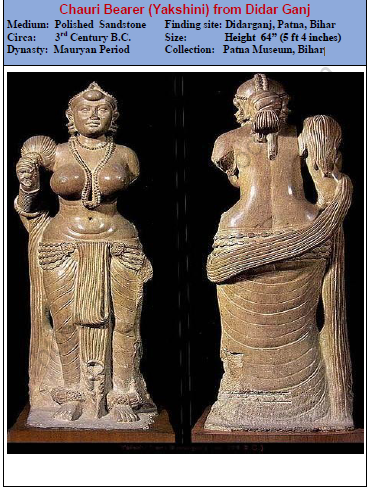 Description: The statues of Yakshas and Yakshis, the deities of fertility and abundance are excellent speciments of the Mauryan craftsman ship in fashioning the human figure. The Yakshi from Patna Museum is a striking example of 3rd century B.C. created by a gifted sculptor.

The life-size standing woman known as Yakshini holding a Chauri (flywhisk) in her right hand is another good example of the sculptural tradition of the Mauryan period. The characteristics of this statue are as follows:

a) It is tall, well-proportional, free standing sculpture of a chatty young woman.

b) She is adorned with jewels on the forehead, ear-ring, necklaces, bangles, girdle over loin cloth and laces.

c) Features of the face are sharp and smooth with proper roundness of different organs of the body are praiseworthy.

d) Her left hand is broken.

e) The sophistication of the image is shown very beautifully.

f) The most remarkable feature of the sculpture apart from the shiny polish is the peaceful and calm expression on her face. Her composure creates a powerful impact of rare and royal dignity. This beautiful Didarganj Chauri Bearer is proud symbol of Indian artistic genius.

Download Worksheets for Class 11 Other Subjects made for all important topics and is available for free download in pdf, chapter wise assignments or booklet...
More..

Download Printable Worksheets, test papers for Class 11 Other Subjects with questions answers for all topics and chapters as per CBSE, NCERT, KVS sylabus
More..