Class 7 Social Science students should refer to the following printable assignment in Pdf for History New Kings And Kingdoms in standard 7. This test paper with questions and answers for Grade 7 Social Science will be very useful for exams and help you to score good marks

Question. The Tripartite struggle between the Pratiharas,Rashtrakutas and the Palas Was for control over the –
1] Kanauj
2] Ajmer
3] Delhi
4] Mathura
Answer : { 1 }

FILL IN THE BLANKS :

Question. The Pratihara dynasty reached a height under the rule of………….
Answer : Mihir Bhoja

Question. The Turkish king ……………was the ruler of Ghazni.
Answer : Firdausi

Question. Why did Mahmud of Ghazni attack India ?W
Answer : His invasions over places were under taken purely to capture the wealth and riches of the country. He attacked wealthy temples and took all the wealth to Ghazni.

Question.What was the social life in Rajputs dynastyT ?
Answer : The Rajputs were kshatriyas and performed the duties of warriors. Rajputs along with the brahmanas enjoyed the highest position in the society.The vaishyas including merchants and trades also played an important role in the city administration. Polygamy was commonly practised in the society.

Question.Describe the village administration under the Cholas ?
Answer : The cholas had a highly organized administrative structure headed by the kings and a council of ministers to advise him. The chola empire was divided into provinces which were called mandalams. The manda- lams were further divided inti districts called valanadu. A group of vill- ages that consists of peasant families or vellalas formed the nadu. The brahmana village assembly was called the sabha and the vellala assembly was called the Ur.The sabha helped the king’s government in different ways like to measure the land that was under cultivation and collect land revenue. The sabha maintained roads,temples and water tanks and sett- led all disputes about land,water and irrigation.

3. Who is the best known Chahamana Ruler?

5. Name the ruler who built the tower of Tanjavour.

6. What do you understand by the term brahmadeva?

7. Which famous inscription gives details of the Chola administration? 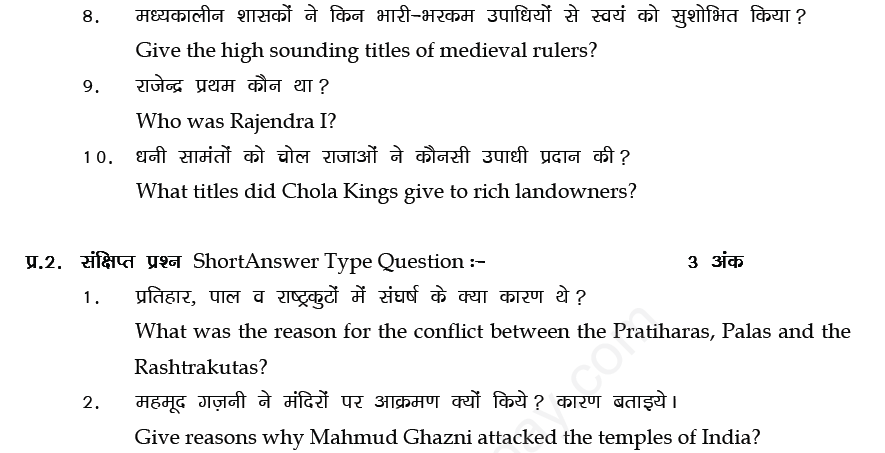