Class 7 Social Science students should refer to the following printable assignment in Pdf for Geography Inside Our Earth in standard 7. This test paper with questions and answers for Grade 7 Social Science will be very useful for exams and help you to score good marks

Class 7 Social Science Assignment for Geography Inside Our Earth

Question.The scientists who study the structure of the earth are called –
1] Ecologist
2] Geographer
3] Geologists
Answer :{ 3 }

Question.The rock which is made up of molten magma is-
1] Sedimentary
2] Metamorphic
3] Igneous
Answer : { 3 }

Question.The sedimentary are transported and deposited by-
1] wind and water
2] plants
3] None of these
Answer : { 1 }

FILL IN THE BLANKS :

Question.The……………is the outermost and the thinnest layer of the earth.
Answer : crust

Question. The rock cycle is the process of …………………of one rock form to another.
Answer : transformation

Question. ……………are solid substances which occur naturally in the rock .
Answer : minerals

Question. What are minerals ?
Answer : Minerals are solid chemical substances which occur naturally in the rocks.They have definite and specific physical and chemical properties.

Question. What are fossils ?
Answer : The remains of the dead plants and animals trapped in the layer of rockare called fossils fuels

Question. Define the sediment ?
Answer : Rocks due to cracks and hitting , breakdown by the natural forces like Glaciers , rivers wind into smaller fragments called sediments.

Question. How are rocks useful to us ?
Answer : Rocks are made of different minerals.They are of immense value to man-Kind.
*Rocks are used in building material ,e.g.basalt,granite,marble and Sandstone
*Many of the metals are obtained as ores from rocks.Iron ore and Bauxite are examples.
*Chemicals found in rocks are also used to make fertilizers.
*Rocks contain fossils which help scientists to know about pre-Historic life on the plants.

Question. Describe the rock cycle ?
Answer : One rock changes into another under certain conditions in a cycle manner . Molten magma cools down and solidify to form igneous rocks.These rocks are broken down due to pressure and climatic conditions into sediments. These are transported and deposited to form sedimentary rocks. The igneous and sedimentary rocks under heat and pressure changes into Metamorphic rocks . These metamorphic rocks under great heat melt down to form molten magma . This again cools down to form igneous rocks . This process of transformation of rocks is called rock cycle.

2. What is the middle layer of the earth called?

3. Name two agents which help in transportation of sediments?

4. Give one special feature of the sedimentary rocks.

7. Name the minerals found in your state. 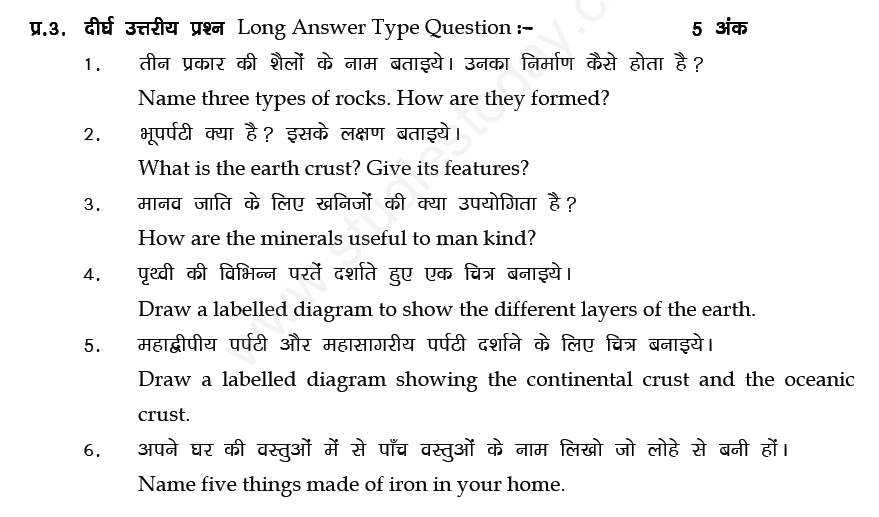