Class 7 Social Science students should refer to the following printable assignment in Pdf for Geography Our Changing Earth in standard 7. This test paper with questions and answers for Grade 7 Social Science will be very useful for exams and help you to score good marks

The Internal and External Face Of the Earth
Give answer to the following questions approximately in 1- 15 words
Q 1. How many shells of the earth are there? Name them.
Ans. There are three shells of the earth: - 1. Lithosphere (crust) 2. Mantle, 3. Core. 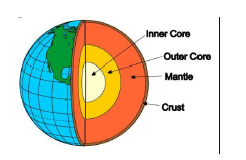 Q 2. How many types of rocks are found on the earth?
Ans. Basically, there are three types of rocks:-
1. Igneous 2. Sedimentary 3. Metamorphic
Q 3. Write down about the Mantle part of the earth.
Ans. Below the upper layers of earth is Mantle. It is 2900 km deep. It is also called SIMA because of its’ main elements Silicon and Magnesium.
Q 4. By which name the innermost part of the earth called? What are the components of this part?
Ans. The innermost part of the earth is called ’Core’. The core known as NiFe, mainly consists of two elements Nickel (Ni) & Ferrous (Fe).
Q 5. How can we avoid soil erosion?
Ans. 1. By planting new trees 2. By adopting better agricultural practices 3. By checking over grazing etc.
Give answer to the following questions approximately in 50-60 words
Q 6. What are igneous rocks? How many types are there in these rocks? Write about the intrusive rocks.
Ans. ‘Igneous’ means fire. These rock are of two types:-1. Intrusive 2.Extrusive
These rocks are formed out of the cooling of the hot and liquid material from the interior of the Earth.
Intrusive Igneous rocks: - Rocks formed by the cooling of the Magma, in the interior of the earth are called as Intrusive Rocks.
Q 7. What are the Sedimentary ocks? How many types are there of these rocks?
Ans. These rocks are formed by the hardening of the layers of the matter brought by agents of denudation (like water, air and river etc.).
There are three types of sedimentary rocks: - 1. Clastic 2. Chemical 3. Organic.
Q 8. Write about the metamorphic rocks, give specific example of these rocks.
Ans. As a result of the effect of temperature and pressure, igneous rocks and sedimentary rocks undergo a change in their form, structure and hardness. Such transformed rocks are called metamorphic rocks. Examples: - Marble, slate, coal etc.
Q 9. What kind of mineral is Mica? For what purpose is it used?
Ans. Mica is a non-metallic mineral. It is used in making electric goods. It is also used in making lamps, paints, radars, rubber, paper, aeroplanes etc.
Q 10. Which mineral is called as 'Liquid Gold'? Give brief introduction.
Ans. Petroleum is called as ‘Liquid Gold’. It is made out of the vegetation and animals trapped between layers of sedimentary rocks. It is refined in refineries before use.
Q 11. Write down the importance of the soil on the earth.
Ans. Fertile soil has always been very important for human civilizations. The fertile soils of Indus, Nile etc. led to the development of the civilizations. Even today high density of population is found in fertile river valleys and plains.

1. What are the earthquake waves called?

3. Which type of force is responsible for the formation of mountains?

4. Which machine is used to measure the intensity of the earthquake?

5. How and in which direction do the vibration move during a earthquake?

7. What do you mean by earthquake preparadness? 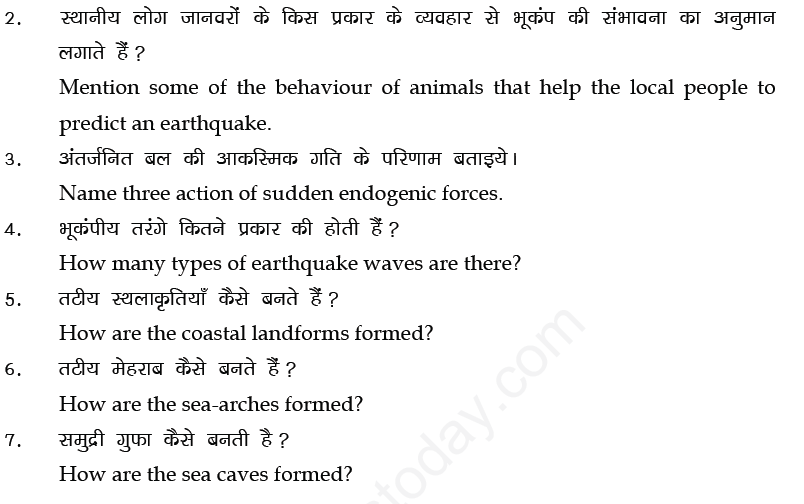 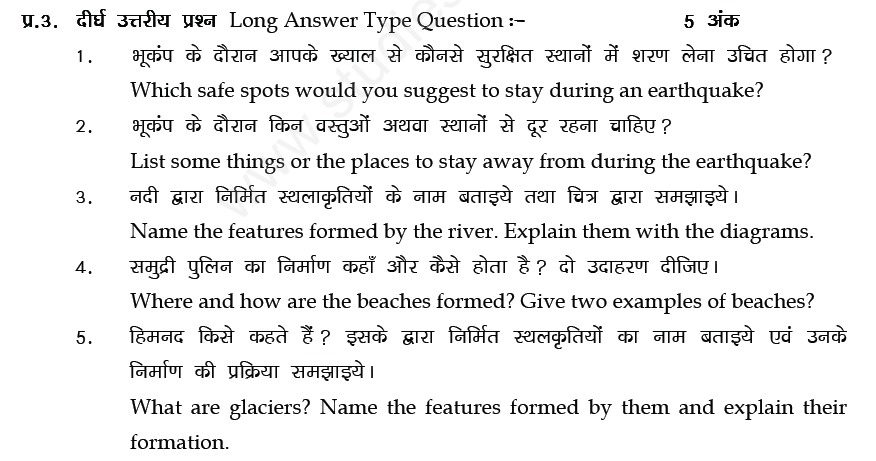