Class 7 Social Science students should refer to the following printable assignment in Pdf for Geography Atmosphere in standard 7. This test paper with questions and answers for Grade 7 Social Science will be very useful for exams and help you to score good marks

Atmosphere and Temperature
Give answer to the following questions approximately in 1- 15 words
Q 1. What do you understand by the Atmosphere?
Ans. The earth is surrounded by a cover of air. This cover is known as Atmosphere.
Q 2. Why we study Atmosphere in Geography?
Ans. Because Atmosphere is responsible for creating and maintaining of plants and animal life on the Earth.
Q 3. Name the layers of Atmosphere.
Ans. 1.Troposphere    2. Stratosphere
3. Mesosphere            4. Thermosphere (Ionosphere+ Exosphere 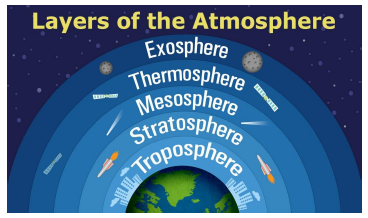 Q 4. Which is called Tropopause limit?
Ans. Tropopause limit is the boundary between Troposphere and Stratosphere.
Q5. What do you understand by Exosphere?
Ans. The outermost layer of Atmosphere is called Exosphere. It has gases like Hydrogen and Helium.
Q 6. What are the elements other than the gases present in the Atmosphere?
Ans. Water vapours and dust particles.
Q 7. What is air pollution?
Ans. Foreign substances in the Atmosphere make air unhealthy. This is called air pollution. Smoke, dust particles and pesticides are the main sources of air pollution.
Q 8. What is temperature and what are the units of measuring the temperature?
Ans. The heat of the air and the internal heat of a good or living being, is called temperature. It is measured in Celsius and Fahrenheit.
Q 9. Why is the temperature very high on the Equator?
Ans. The rays of the sun fall directly on the Equator. Therefore the temperature is high over there.
Give answers to the following questions in about 50- 60 words
Q 12. What are the main factors that cause air pollution?
Ans. Solid pollutants: - 1. Volcanoes pollute the air by dust particles.
2. Smoke from the burning of fuels release carbon particles into the air.
Gaseous pollutants:- 1. Exhaust materials of automobiles pollute the air.
2. Smog causes air pollution.
Q 13. What we call the lower layer of the atmosphere?
Ans. 1. The lowest layer of the atmosphere is called Troposphere. Its average height is 12 Km.
2. The entire weather phenomenon like rainfall, storm, clouds etc. takes place only in this layer.
3. The 75% of all the air, is present in this layer.
Q 14. Write the ratio of main gases in the air.
Ans. 1.Nitrogen- 78.03%, 2. Oxygen- 20.99%
3. Argon- 0.94% 4. Carbon dioxide- 0.03%
5. Hydrogen- 0.01% 6. Dust particles and water vapours.
Q15. In which layer of the Atmosphere the Ozone gas exists? Why is it so important?
Ans. Ozone gas exists in Stratosphere layer.it absorbs the Ultraviolet rays of the Sun, which are very harmful to the life of living beings on the earth.
Fill in the blanks :
1. As we go up to the hills the temperature decreases.
2. The main sources of the temperature are Sun and internal part of the Earth.
3. The Ozone gas absorbs Ultraviolet rays.
4. The electrically charged particles are found in Thermosphere or Ionosphere layer.
5. The wireless communication system works under Radio waves.
6. Nitrogen gas is found in maximum quantity in atmosphere

Q1. Imagine a day without the atmosphere and describe at least ten possible consequences.

Q2. Find out about the greenhouse effects- its causes and dangers.

a) The atmosphere is of great significance.

b) All jet planes fly in stratosphere.