Science
Download PDF
Read and download free pdf of CBSE Class 9 Science The Fundamental Unit of Life Assignment Set B. Get printable school Assignments for Class 9 Science. Standard 9 students should practise questions and answers given here for Science in Grade 9 which will help them to strengthen their understanding of all important topics. Students should also download free pdf of Printable Worksheets for Class 9 Science prepared as per the latest books and syllabus issued by NCERT, CBSE, KVS and do problems daily to score better marks in tests and examinations

Class 9 Science students should refer to the following printable assignment in Pdf for The Fundamental Unit Of Life in standard 9. This test paper with questions and answers for Grade 9 Science will be very useful for exams and help you to score good marks

Class 9 Science Assignment for The Fundamental Unit Of Life

THE FUNDAMENTAL UNIT OF LIFE

Ques: 1. Where are chromosomes located in a cell? How are they important to us?

Ans:  Chromosomes are located in the nucleus. They carry hereditary information in the form of genes for structural and functional traits.

Ques: 2. Give one function of RER and SER.

Ques: 3. What will happen if the cellular organization is destroyed due to some physical or chemical means?

Ans:  If organization is destroyed, the cell will not be able to perform many of its function. Which will cause cell death.

Ans:   The two functions of nucleus are:

i. nucleus is the control center of cell. Helps in transmission of hereditary characters.

Ques: 5. Why are lysosomes called ‘suicidal bags of the cell’?

Ans:  Lysosomes contain hydrolytic enzymes. These enzymes are capable of digesting foreign materials.,debris, and other cell organelles. When the cell is old or there is any disturbance in the cellular metabolism, the lysosomes burst open and release hydrolytic enzymes destroying the entire cell.

Ques: 6. i. Why do we soak chana in water overnight?

ii. Name the phenomena involved in this process.

iii. Name another food that can be soaked in this way.

Ans:  i. we soak chana overnight because water by the process of endosmosis diffuses in the chana and get swollen and aids in cooking.

Ques: 8. What is the similarity and dissimilarity between mitochondria and chloroplast? What  will happen to a RBC when it is placed in a hypertonic solution?

Ans:   Similarity- both mitochondria and chloroplast have their own DNA and ribosomes. Dissimilarity- mitochondria are site of respiration and release of energy whereas chloroplast is known as kitchen of the cell as it helps green plants to prepare food.

Ques: 9.  Explain the process by which Amoeba obtains its food.

Ans: Amoeba have flexible plasma membrane that help it to engulf food particle. The engulfed food passes into the body as a phagosome. Phagosome combines with Lysosome and forms as food vacuole. Digestion occurs in it. The digested food passes into surrounding cytoplasm. The undigested matter is thrown out of the cell by exocytosis.

11.  Given below is an image of cell. Study the diagram and answer the following questions: 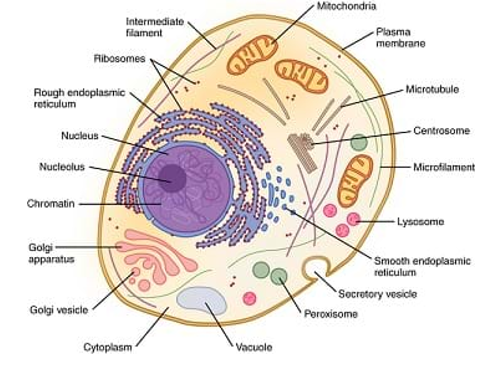 a. Identify the type of cell shown.

b. Which organelle is known as the powerhouse of the cell?

c. What is Golgi apparatus known in plants?

d. What is the function of centrosome and vacuole?

Ques: 13. List the constituent of plasma membrane. What will happen to the cell if the plasma Membrane ruptures or breaks down? Why does endocytosis occurs only in animal cells?

Ques: 14.  a.  Rakesh takes concentrated salt solution, and after sometime he vomits. What is the  phenomenon responsible for such a condition? Explain.

b. What will happen if fertilizer is added to green grass lawn?

c. What will happen when plant leaves are boiled and then a drop of concentrated salt solution is added on boiled leaves?

Ans:   a. concentrated salt solution will cause dehydration in the wall of alimentary canal due to exosmosis which causes stretching and reverse movements which cause vomiting.

b. fertilizers will kill the plants due to exosmosis and plasmolysis.

c. no change will happen as plant cells are boiled, so it is dead hence no osmosis will take place.

Ques: 15. a. Which type of cell division is required for growth of cell and which type is involved in formation of gametes?

b. An animal and a plant cell is kept in a very dilute medium. Which of the cell is likely to  burst and why?

c. What will happen to a cell if it lacks ribosomes?

Ans:  a. growth of cell- mitosis formation of gametes- meiosis

b. animal cell will burst as it does not have additional cell wall. Cell wall exerts equal pressure to the cell content so that it can withstand pressure and not burst.

c. If the cell lacks ribosomes then it will not be able to synthesize proteins inside the cell.

Question. What is endoplasmic reticulum? Write its main functions.
Ans : Endoplasmic reticulum is a network, enclosing a fluidfilled lumen. Its main functions are :
(i) Synthesis of proteins (rough ER).
(ii) Synthesis of lipids and other metabolic products and their secretion (SER).
(iii) Helps in formation of cell plate and nuclear membrane during cell division.
(iv) ER also produces substance for new cellular parts (especially cell membrane).
(v) ER provides internal support to the colloidal cytoplasmic matrix of the cell.

Question. Write a note on the structure of cell.
Ans : (a) Cell is the basic unit of all living organisms. It is surrounded by an outer selectively permeable Plasma Membrane. Plant cells have an additional covering called “cell wall” outer to the Plasma Membrane.
(b) Inside the plasma membrane there is a translucent viscous substance the cytoplasm in which the organelles are embedded. The control centre of the cell is the nucleus; it contains all the information necessary for the cell to function and to reproduce. Surrounding the nucleus is the endoplasmic reticulum (ER) on which ribosomes may be embedded. Ribosomes are granular structures which are the site of protein synthesis.
(c) The powerhouse of cell is the mitochondria.It helps in releasing energy by the oxidation of  food in cell. There are flat membranous secretory structures in the cell called the Golgi bodies. In plant cells, an additional structure located near the nucleus called the chloroplast, is also present. They are the site of photosynthesis.
(d) Cells also contain lysosomes which are also called suicide bags. They digest and remove the unwanted debris of the cell. Centriole located near the nucleus helps in cell division. Cytoplasm also contains vacuoles filled with the cell sap. In plant cells, vacuole is large and centrally placed.

Question. Describe the role played by the lysosomes. Why are these termed as suicidal bags? How do they perform
Ans :
Functions of lysosomes :
1. Extracellular digestion. Sometimes lysosome enzymes are released outside the cell to break down extracellular material.
2. Digestion of foreign material. Lysosome also destroys any foreign material which enters inside the cell such as bacteria.
3. Cellular digestion. In damaged cells, ageing cells or dead cells lysosomes get ruptured and enzymes are released. These enzymes digest their own cell. Lysosomes contain about 40 hydrolytic enzymes.
When the cell gets damaged, lysosomes burst and their enzymes digest their own cell. So, lysosomes are called ‘suicide bags’.

Question. What types of enzymes are present in the lysosomes?
What is their function? Which organelle membranes manufacture these enzymes?
Ans : Lysosomes contain powerful digestive enzymes capable of breaking down all organic material.
Lysosomes help to keep the cell clean by digesting worn out cell organelles and foreign material such as bacteria or food.
RER (Rough Endoplasmic Reticulum) makes the digestive enzymes present in the lysosomes.

Question. Explain endocytosis.
Ans : Endocytosis is the ingestion of material by the cells through the plasma membrane. It is a collective term that describes three similar processes : phagocytosis (cell eating), potocytosis (cell drinking) and receptormediated endocytosis. These processes are pathways to specifically internalize solid particles, small molecules and macromolecules, respectively.
74. Why do plant cells have more in number and big-sized vacuoles as compared to the animal cells?
Ans : Plants cells attain turgidity and rigidity due to the more number of vacuoles as well as large-sized vacuoles help the plant cells to withstand the wear and tear, external environmental conditions. They also help in the storage of essential material required by plants for their growth like amino acids, sugar and various organic substances.

Question. Give difference between ribosome and centrosome.
Ans :
Ribosome :
(i) It is found in both animal cell and plant cell.
(ii) These are dense, spherical and granular particles which occur freely in the matrix or remain attached to the endoplasmic reticulum.
Centrosome :
(i) Centrosome is found only in animal cells.
(ii) It consists of two granules like centrioles.

Question. (i) Name the organelle which provides turgidity and rigidity to the plant cell. Name any two substances which are present in it.
(ii) How are they useful in unicellular organisms?
Ans : (i) Plant cells have big vacuoles full of cell sap that provide them turgidity and rigidity. Plant vacuoles store amino acids, sugars, various organic acids and some proteins.
(ii) In unicellular organism they may serve the following purposes :
1. Forming food vacuoles : In single celled organisms like amoeba, the food vacuole contains the food items that the amoeba has ingested. The food items are digested by the enzymes later on.
2. Removal of excess water and wastes : In some unicellular organisms, specialized vacuoles play important roles in expelling excess water and some wastes from the cell.

Question. What are genes?
Ans :ene is a part of DNA. They are located on chromosomes in linear fashions. One gene may perform one or more function. Genes are carrier of genetic character.