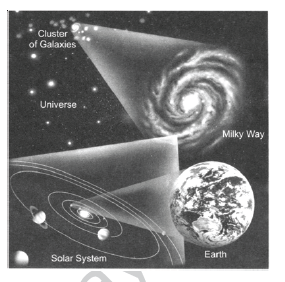 FACT FILE
* The universe is so vast in relation to the matter it contains that it can be compared with a building 20 miles long, 20 miles wide and 20 miles high that contains 1 grain of sand.
* The three most common elements in the universe are hydrogen, helium and oxygen.

NIGHT SKY
During the daytime you can see only the sun, which appears to move from East to West. After sunset, the night sky is dotted with bright stars. At night the moon and thousands of stars are seen twinkling in the sky. If you watch the sky through a telescope you may see millions of stars, some of which are brightly coloured. You see certain groups of stars which appear to be forming figures in clusters. They are called constellations. The moon is a natural satellite of earth whose size changes every day. Moon completes one revolution around the earth in 27 days, 7 hours and 43 minutes. Furthermore, you see an occasional comet, which appears as a ball of fire, having a tail. Then, there are shooting stars or meteors. They appear to fall from the sky. In addition to all these there are some bright heavenly bodies which do not twinkle. They are called planets. The natural bodies in the sky are called celestial bodies or heavenly bodies. Example– The sun, the earth, the moon, planets, stars, meteors, comets are called heavenly bodies or celestial bodies.

THEORIES OF THE ORIGIN OF UNIVERSE :-
The three main theories are :-

(1) Bigbang theory :- According to this theory the universe was born after a massive explosion called the bigbang. A long time after the big bang, stars like our sun were formed. At that time clouds of hot gases and particles revolved around the sun. Over time, many particles got stuck together to form large bodies. The bodies pulled in smaller objects near them by gravitational force. "This made them larger still. These bodies finally become the planets and this universe has been expanding ever since".

(2) Steady state Theory :- This theory states that the universe appears the same at all times and at all points. It is unchanging without a beginning or an end.

(3) Pulsating Theory :- This theory states that all matter is flying apart from a heavily compacted mass and will eventually slow down, begin to contract and become so condensed that it will explode again and the expansion will start again.

MEASUREMENT OF DISTANCES IN THE UNIVERSE
The distances between heavenly bodies in space are very large. It is very difficult to measure these distances in kilometre. That is why, they are expressed in terms of light year and parsec.

(b) PARSEC: One Parsec (pc) is equal to 3.26 light years. The distance of Proxima Centauri which is a companion of, Alpha Centauri' is 1.3 parsec

STARS AND PLANETS
A star is a heavenly body which has light of its own. We are able to count 3000 stars in the sky with the naked eye. With the help of a small telescope, we can see 100,000 stars, Nearly 20 thousand million stars can be seen through a powerful telescope. The stars are very large in size and are several times bigger than the sun but some are smaller. They appear small because they are very far away.

Stars consist of large amount of hydrogen gas at very high temperature. They are so hot that they give out light. It is because of this light that stars glow at night. They move in the sky but their positions remain fixed in the sky with respect to other stars. They seem to twinkle due to air disturbances in the atmosphere of earth. The Sun is a star which gives light all the time.
"Planets are heavenly bodies which revolve around the Sun." They do not have their own light but reflect the light of the Sun that falls on them. Planets do not twinkle. They move with respect to the Earth as well as with respect to the sun. The Earth is also a planet. Till recently there were nine planets in the solar system but now the last, i.e., the ninth planet- Pluto has been removed from being called a planet.