INTRODUCTION
We use various materials for our basic needs. Some of them are found in nature and some have been made by human efforts. The variety of substances that man gets from earth and nature to meet his basic needs are called natural resources.
Types of Natural Resources :
These are two types namely renewable and non-renewable.

Fossil fuels : Exhaustible natural resources like coal , petroleum or natural gas were formed from the dead remains of living organism (fossils). So , these are called fossil fuels. Coal and petroleum are very important natural resources and play a vital role in modern society. They are found in the earth's crust.

Coal : Coal is a complex mixture of carbon, hydrogen and oxygen compounds. Some nitrogen, sulphur and phosphorus compounds are also present in it. It is found in coal mines deep under the surface of earth.

Occurence of coal : Russia, China, UK. Germany, Africa and Australia have rich deposits of coal. In India, big coal mines are found at Jharia and Bokaro in Jharkhand and Raniganj in West Bengal.

Types of coal :
The different varieties of coal with varying carbon content are given below in table

Formation : It is believed that millions of years ago, the ground below the forests was split open by natural forces such as earthquakes and volcanoes. The forests were buried in the chasms. Thus, the plants had no contact with oxygen. Successive layers of sediments sealed the buried plants. Over millions of years these deposits were subjected to tremendous pressure and heat which finally transformed them into coal. 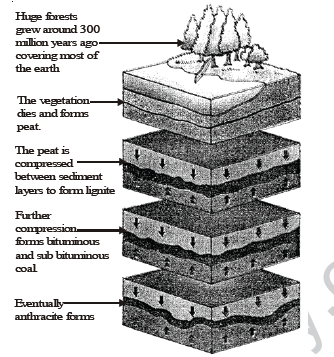 (i) Coke : Coke contains 98% carbon. It is porous , tough black and the purest form of coal. Like charcoal, it is a good fuel and burns without smoke. But it is seldom employed as a fuel because it can be put to more valuable use. It is largely employed as a reducing agent in the extraction of metals from their ores, It is also used in making fuel gases like water gas and producer gas.

(ii) Coal tar : Coal tar is a mixture of different carbon compounds. It is a thick, black liquid with unpleasant smell. The fractional distillation of coal tar gives many chemical substances which are used in the preparation of dyes, explosives, paints, synthetics fibres, drugs, and pesticides. Some of these chemical substances are benzene, toluene, phenol and aniline. Naphthalene balls used to repel moth and other insects are also obtained from coal tar. Bitumen is used in place of coal tar for metalling the roads.

(iii) Ammoniacal liquor : The ammonia produced as a result of destructive distillation of coal is absorbed in water. The aqueous solution of ammonia, i.e. ammonium hydroxide solution , is called ammoniacal liquor. It is used in the preparation of fertilizers such as ammonium sulphate and ammonium superphosphate.

(iv) Coal gas : Coal gas is mainly a mixture of hydrogen, methane and carbon monoxide. The gases present in coal gas are combustible, and hence it is an excellent fuel. It has high calorific value. It was used for lighting houses, factories and streets in Mumbai until 1950. It was also used for cooking until recently.

Download Class 8 Science assignments. Practice tests for Class 8 for Science has been made for all important topics in NCERT book and is available for free...
More..

Download Class 8 Science assignments. Practice tests for Class 8 for Science has been made for all important topics in NCERT book and is available for free...
More..

Access CBSE Class 8 Science MCQs for MCQs for important topics for all chapters in MCQs based on CBSE and NCERT pattern. Access full database of multiple...
More..

The CBSE Board Exams have been postponed twice this year! New Delhi: The Education Ministry has urged the Central Board of Secondary Education (CBSE) to reinstitute the board exams only for the main subjects. As per the official statement the Board will not conduct...

The Schools of Delhi strives for Good Health and Wellness for all its community of Students, Parents and Staff, after the daily increasing of positive cases of Coronavirus in Delhi. The Delhi Government instructed all the schools of the state on Thursday to shut down...

CBSE had to postpone the class 12 English Exam, the date for the exam will be announced soon. Please see CBSE notice below

Board Exams FAQs released by CBSE

CBSE has released very important FAQs for class 10 and class 12 students who have given the board exams. Students have been coming up with lot of queries and have lot of questions relating to what are the next steps of CBSE. The following FAQs by CBSE will help to...