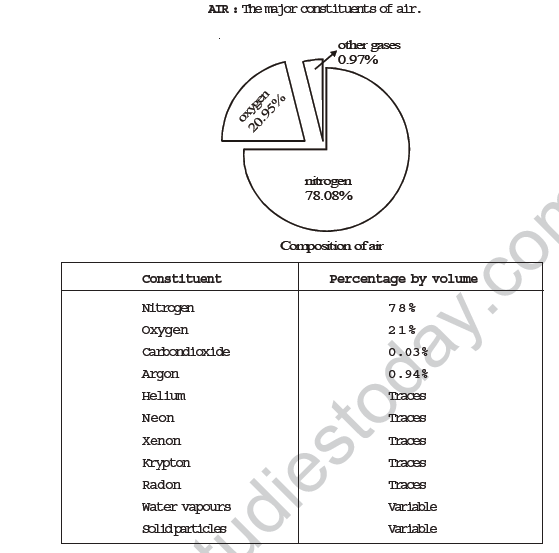 Human beings are dependent on the living and non-living components of environment for their survival. But, with the increase in population, human activities have led to deterioration of the quality of environment. For
e.g. :
• With increase in population, our living places have become congested and we face the problem of housing.
• More food is needed to feed the increasing population. So we cut forests to make space for the fields to grow crops.
• More and more industries, to manufacture useful products, are developed. These industries release harmful gases in the atmosphere and liquid wastes in water.
All these activities have led to the contamination of our physical environment, namely air, water and soil. As a result, (i) quality of air, water & soil has drastically gone down, and (ii) a large number of plant and animal species have disappeared. The contamination of our physical environment (air, water and soil) is called pollution, which is a serious problem these days.

Pollution :– Is an undesirable change in physical chemical or biological characteristic of air, water and land which is harmful to man directly or indirectly.
Pollutant :– Is a substance present in the environment in such a concentration that is harmful to the environment and living organisms.

(i) Gaseous Pollutants : All pollutants which are in the gaseous state under normal conditions are called gaseous pollutants. e.g., Carbon monoxide, carbon dioxide, Oxides of Sulphur and Nitrogen, Chlorine gas etc.

(ii) Particulate Pollutants : Very small particles of solids and liquids suspended in the air are called particulates. Most particulates have particle size ranging from 0.1 micrometer to 10 micrometer. These particles create haziness in the atmosphere and cause air pollution. The inhalation of small particulates over longer periods may cause 'scarring' or 'fibrosis' of the lung lining leading to a disease called pneumoconiosis. Some common particulates present in the atmosphere (or air) are Dust, smoke, fumes, mist, fly ash, pesticides, insecticides, cement dust, asbestos dust, lead dust, pollen grains, bacteria, fungi, etc. Although the metallic particles are present in very low concentrations, some of them are very harmful to the living organisms.
The two metals which are extremely harmful to the human beings are lead and mercury.

(iv) Biodegradable Pollutants : These include the pollutants that can be rapidly decomposed by natural or by some artificial systems. Decomposition is naturally caused by micro-organisms. Examples of biodegradable pollutants are paper, cloth, wood, domestic sewage, faecal matter and agricultural residues.

How does a pollutant differ from a contaminant?

A contaminant is a substance which does not occur in nature, but is introduced in significant amounts into the environment by human activities. It may or may not be harmful to the living organisms and the environment. A contaminant which is harmful falls under the category of pollutant. One well-known example of a contaminant is that of Pyrosulphuric acid (H2S4O7) that had leaked from a defective tank in Delhi, leading to the death of many persons and causing skin and breathing problems to many others. As pyrosulphuric acid does not occur in the atmosphere, it is a contaminant. Further, as it
had dangerous effects, it is also a pollutant.

Threshold Limit Value (TLV) : The permissible limit of a pollutant in the atmosphere to which if a healthy worker is exposed for eight hours a day or 40 hours a week throughout his life and there is no adverse effect on him is called Threshold Limit Value (TLV). For example, TLV of carbon monoxide is 40 p.pm, while that of carbon dioxide is 5000 p.pm. On the other hand, for a poisonous gas like phosgene, TLC is 0.1 p.pm.