CBSE Class 8 Science Microorganism Frind and Foe Chapter Notes. Learning the important concepts is very important for every student to get better marks in examinations. The concepts should be clear which will help in faster learning. The attached concepts made as per NCERT and CBSE pattern will help the student to understand the chapter and score better marks in the examinations.

OCCURRENCE OF MICROBES
• Microorganisms can survive under all types of environment, ranging from ice cold climate to hot springs and deserts to marshy lands.
• They are also found inside the bodies of animals including humans.
• Some microorganisms grow on other organisms while other exist freely.
• Microbes can live alone, while fungi and bacteria may live in colonies.

MILESTONE IN MICROBIOLOGY
Antony van Leeuwenhoek (1632-1723) born in Holland, was the first person known to have viewed microbes with the help of self designed microscope. He discovered bacteria first, and then red blood cells, yeast in dough, sperm cells and many unicellular organisms. He drew a sketch of each tiny object he viewed and described its source, shape and structure to the best of his understanding. 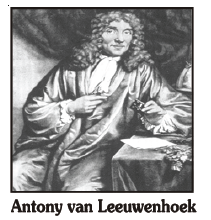 MICROSCOPES
There are two types of microscopes – a light microscope, which is commonly used in a school laboratory and an electron microscope. In a compound (light) microscope one of the two lenses used is as an "eye piece" and the other as an "objective". Eye is kept over the 'eye piece' and the object to be viewed is kept under the 'objective' on a transparent glass plate on the dias or the stage. This way the image of the object being viewed is magnified upto a thousand times. 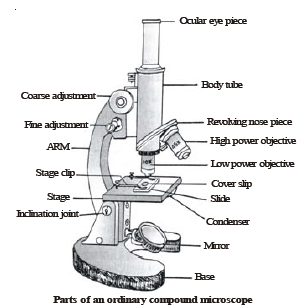 Electron microscope is a special type of microscope that uses beams of electrons instead of light, to provide magnification. Magnetic fields are used to bend the electron beams, just as rays of light are bent by the refractive power of a glass lens. Virus could be identified only through an electron microscope.

REVIEW QUESTIONS
1. What are microorganisms?
2. Define microbiology.
3. ______is known as father of microbiology.
4. Which type of microscope is commonly used in school laboratory?
5. Who is Antony van Leeuwenhoek?

BACTERIA
• Bacteria were first observed in rainy water and later in teeth scum by Leeuwenhoek and he called them "animalcule".
• Cohn and Ehrenberg first of all coined the name "bacteria".
• Study of bacteria is known as bacteriology.
• They are basically unicellular but can exist as a chain or group of cells.
Occurrence : Bacteria are ubiquitous i.e., they occur anywhere and everywhere, in water in air, in soil and in all living organisms.
Size : Bacteria are very small organisms which are barely visible under the light microscope. Their sizes vary from 0.2 to 100 μ (micron) (1 micron = 10–6 meter).
1. Smallest bacterium = Haemophilus influenze
2. Largest bacterium = Epulospiscium fishelsoni
3. Longest filamentous bacterium = Beggiatoa mirabilis

BACTERIAL CELL STRUCTURE
• Bacteria are unicellular microorganisms.
• They have a primitive cell structure.
• Each bacteria cell has rigid cell wall around it.
• There is no well-developed nucleus but chromatin or nuclear or genetic material or chromosome or DNA is found scattered in the jelly-like granular substance known as cytoplasm present inside the cell. This kind of nucleus is described as incipient nucleus or nucleoid.