Sound is a form of energy which produces the sensation of hearing in our ear's.

HOW SOUND IS PRODUCED
The following activities will help you understand how sound is produced.

ACTIVITY
Place a metallic/plastic ruler on the table. Take care to place it in such a way that 2/3rds of the scale projects (just out) from the edge of the table. Place a heavy object such as a dictionary or a brick on the ruler. Now press the projecting end downwards and release it abruptly. What do you observe?

You wil see that the ruler snaps back and starts vibrating. At the same time, it also produces a sound. Once the vibrations stop, the sound also stops.
Vibrating Bodies Produce Sound

Cut a rubber band. Hold one end of it in your mouth and the other end in your hand and stretch it. Now, pull it with the other hand and release it (fig). What happens to the rubber band? You will notice that it moves to and fro or vibrates and it also produces sound. 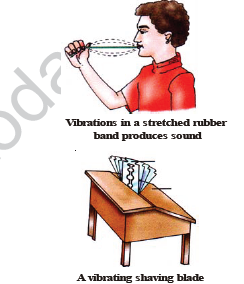 Sound from a Vibrating Blade
Take a used shaving blade and fix it on a table, or desk as shown in Fig. Bend the upper end of the blade and leave it. The blade begins to vibrate. You can actually see it vibrating. Touch the blade carefully with your finger. It stops vibrating. Does it produce any sound now?

Conclusion : From these activities, we come to the conclusion that the sound is produced by the vibrating objects or bodies.

Characteristic of Vibrations : In sound producing objects, the vibrations take place very fast...so fast, in fact, that they cannot be seen very clearly with the unaided human eye (slow-motion video is one practical solution that is routinely used in scientific and industrial applications). We can produce slower vibrations, which are also called oscillations, by an arangement called a simple pendulum. It consists of a ball or any weight, such as a stone, wooden top, steel bolt, etc. which is here called a bob, and which hangs down vertically.

Figures show a oscillating simple pendulum and a vibrating string depicting the mean position and amplitude. by means of a thread. It hangs vertically because of the force of gravity acting upon it. When the bob is given a small push, it performs a to-and-fro motion for some time and ultimately stops. The position where the bob stops is called the mean position (A) or the equilibrium position. 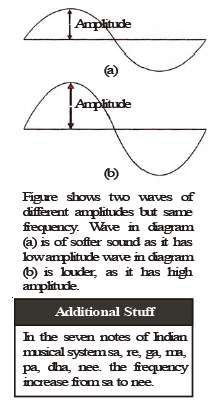 AMPLITUDE
The maximum displacement of the bob from the mean position during oscilations is called amplitude of the oscillation. In the case of a simple pendulum, as show in the figure, the amplitude is AB (or AC).

TIME PERIOD
When a bob moves from one position and returns to the same position, such that it repeats the motion, it is said to complete on oscillation.

The time taken by a vibrating body to complete one oscilation is called the time period. 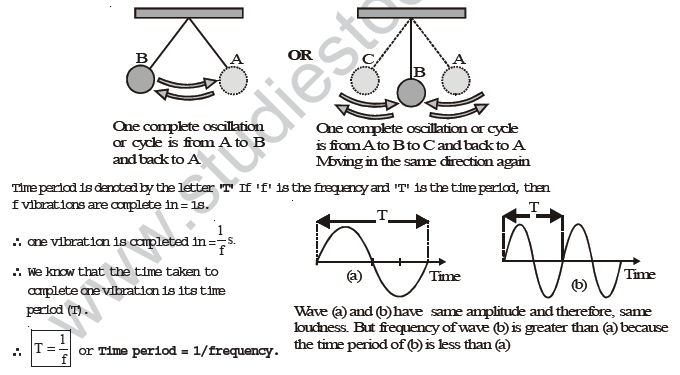 TRY YOUR SELF
Q. Define vibrations Q. How is sound produced?
Q. What is meant by oscillatory motion? Q. Define frequency.
Q. Give the unit in which frequency is measured.
Q. The sound from a housefly is produced when it vibrates its wings at an average rate of 300 vibrations per second. What is the time period of the vibration?
Q. The frequency of a given sound is 4.5 kHz. how many vibrations is it completing in one second?