INTRODUCTION
We use force all the time. We use force to open a door, to pick up the school bag, to brush our teeth, to squeeze out toothpaste from a tube, to turn on a tap and so on. Even the earth is exerting a force on us all time. It is pulling all of us and all things on earth towards it.In fact we use force for every single action of ours! You have studied about force in previous classes. Do you remember what a force is ? 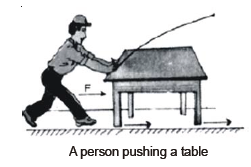 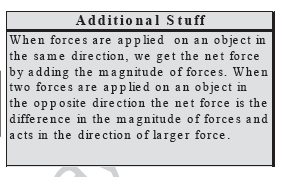 NOTE :
• Force has a sense of direction also. It means that we can apply the same amount of force in different direction, producing different effects.
• Without source force cannot be possible.


1. FORCE CAN MOVE A BODY LYING AT REST

(a) A goalkeeper stopping a football moving towards the goal post.
(b) A moving bicycle coming to rest on applying brakes. Here the frictional force between the brake lining of the brake shoe and the bicycle wheel rim, acts to stop the bicycle.