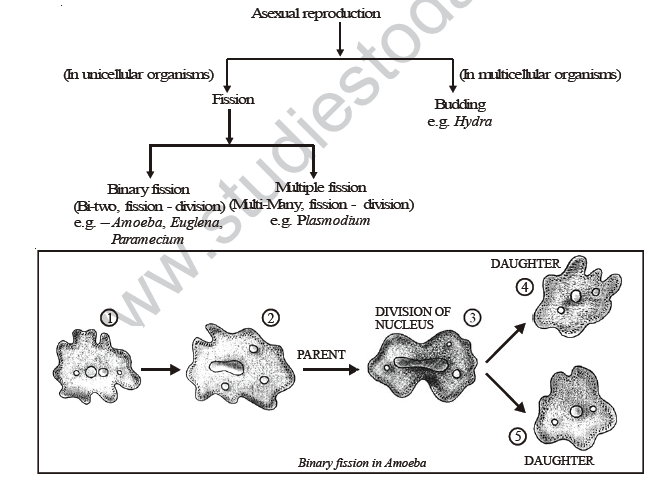 Reproduction in Hydra :
• In this method an outgrowth (bud) is formed on the parent organism.
• The bud gradually grows in size and gets detached from the parent.
• Detached bud develops into an adult organism, similar to the parent

Types of animals on the basis of presence of sex organs :
(a) Unisexual Animals : Those animals in which male and female sexes remain separate e.g. Human beings, Cow, Cat, Dog.

(b) Bisexual Animals : • Those animals in which male and female sex organs are present in single body are called bisexual or
hermaphrodite e.g. Earthworm, Taenia solium, Leech

Re verification of Class 12 Board Exams Marks

Modalities and Schedule for Senior Secondary School (Class XII) Examinations, 2020 in the subjects whose examinations have been conducted by CBSE for the processes of (I) Verification of Marks (II) Obtaining Photocopy of the Evaluated Answer Book(s) (Ill) Re-evaluation...

Re verification of Class 10 Board Exams Marks

Modalities and Schedule for Secondary School (Class X) Examinations, 2020 in the subjects whose examinations have been conducted by CBSE for the processes of (I) Verification of Marks (II) Obtaining Photocopy of the Evaluated Answer Book(s) (Ill) Re-evaluation of Marks...