CBSE Class 8 Science Reaching the Age of Adolescence Chapter Notes. Learning the important concepts is very important for every student to get better marks in examinations. The concepts should be clear which will help in faster learning. The attached concepts made as per NCERT and CBSE pattern will help the student to understand the chapter and score better marks in the examinations.

REACHING THE AGE OF ADOLESCENCE

ADOLESCENCE
• The period of life, when the our body undergoes changes, leading to reproductive maturity, is called adolescence.
O R
• The period of transition from childhood to adulthood is called adolescence.
• Adolescence begins around the age of 11 and lasts upto 18 to 19 years of age.
• This period covers the 'teens' (13 to 18 or 19 years of age), adolescents are also called 'teenagers.'

REVIEW QUESTIONS
1. What is adolescence ?
2. Define puberty.
3. Adolescents are generally called teenagers. Why ?

CHANGES AT PUBERTY
Increase in Height :
• The most conspicuous change during puberty is the sudden increase in height. At this time the long bones, that is, the bones of the arms and the legs elongate and make a person tall.
• The rate of growth in height varies in different individuals.
• Height of an individual is more or less similar to that of some family member. This is because height depends on the genes inherited from parents. It is , however, very important to eat the right kind of food during these growing years. This helps the bones, muscles and other parts of the body get adequate nourishment for growth.

Change in Body Shape :
• In boys shoulders generally broaden as a result of growth.
• In girls, the region below the waist becomes wider.
• In boys, the muscles of the body grow more prominently than in the girls. 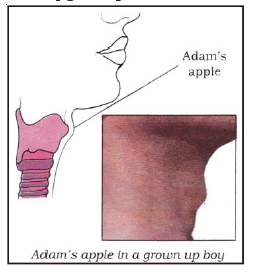 Voice Change :
• At puberty, the voice box or the larynx begins to grow. Boys develop larger voice boxes. The growing voice boxes in boys can be seen as a protruding part of the throat called Adam's apple.
• In girls, the larynx is hardly visible from the outside because of its small size.
• Generally, girls have a high pitched voice, whereas boys have a deep voice.
Increased Activity of Sweat and Sebaceous Gland :
• During puberty the secretion of sweat glands and sebaceous glands (oil glands) increases. Many young people get acne and pimples on the face at this time because of the increased activity of these glands in the skin.

Mental growth :- Thinking skill develops. They are able to think in a more flexible, abstract, and logical way. The ability to see others point of view, exploring ideas, developing concepts and memory skills improve.

Emotional growth :- Emotional changes cause the young person to look at friend and family in new ways. They are very happy at one moment and the very next their mood changes. These comes a feeling of giving and of helping people. Interest in the opposite sex and desire for closeness arise.

Social growth :- In includes developing a personal identity, accepting oneself, forming more mature relationships with peers of both sexes, developing independence and preparing for a career.

SECONDARY SEXUAL CHARACTERS
The reproductive organs are testes and ovaries which produce the gametes, i.e., sperms in males and ova in females. The features which help to distinguish the male from the female, are called secondary sexual characters.

Pubertal Changes (Secondary Sexual Characters) in Male :
Widening of shoulders.
Deepening of voice.
Growth of hairs under chest armpits and around pubic area.
Appearance of beard and moustaches.
Growth of sex organs, [Testes & Penis].
Increased activity of sweat and sebaceous glands.
Oily skin and appearance of pimples.
Darkening in skin colour of the genital area.

Please click the link below to download pdf file for CBSE Class 8 Science Reaching the Age of Adolescence Chapter Notes.