CBSE Class 8 Science Rain Thunder and Lightning Chapter Notes. Learning the important concepts is very important for every student to get better marks in examinations. The concepts should be clear which will help in faster learning. The attached concepts made as per NCERT and CBSE pattern will help the student to understand the chapter and score better marks in the examinations.

RAIN, THUNDER AND LIGHTNING
A Game of Light and Sound in The Sky, Lightning and Thunder The game of light and sound is going on in the sky since eternity. Initially man took it as a natural phenomenon which brought rain later. Some people took this as a wrath of God but wiser people took this phenomenon as a prelude to bleassings from the God. Man was afraid of lightning but happy for the rain. It is true that thunderbolts were feared since they brought devastation to life on earth and caused forest fires, but the rain brought prosperity. All this was happening in nature but the exact nature of the happenings in the sky were not known to man.


LEARNING ABOUT SPARKS
It was sometime in 600 BC, when a Greek Philosopher, by the name of Thales while rubbing amber with a piece of fur found the amber attracting light objects such as small bits of straw. He also found amber generating a spark. Amber in Greek is called elektron. After a gap of about two thousand years Dr. William Gilbert, physician to the Queen of England confirmed the experiment made by Thales and in addition showed that similar property developed by rubbing glass with silk, ebonite with cat's skin cat's fur with dry hands and sealing wax (lac) with flannel. It was he who coined the word electric, from the Greek word elektron, the name for amber.

LEARN THAT
1. Amber is a resin which dripped from Pines millions of years ago and got burried under the soil. Over a long period of time this resin became hard like stone and looked like brown coloured glass. Amber was used for making cigar holders and combs for the rich.

2. Ebonite is the hard wood from Ebony trees. It is dark brown or black due to deposition of gum-like substance in its cells. At one time this wood was being used for making piano keys and handles for brush and walking sticks.

STATIC ELECTRICITY, electric charge at rest Rub a plastic scale or a comb made from plastic through your dry hair. Bring them over bits of paper. Bits of
paper get attracted to the plastic. Substances like amber and plastic, develop a "CHARGE" on them on rubbing. This charge attracts the bits of paper. The charge was given the name 'electric charge' and the bodies on which electric charge developed were called electrified bodies. The electric charge developed on these materials ramain upon the body of the material and it does not move as a current through metallic wires as we find it in our homes in the case of current electricity. This kind of electric charge is therefore called "Static Electric Charge". Static means which is at rest and is not moving. The static charge is also called 'static electricity' and its study is known as electrostatics.

UNCHARGED AND CHARGED BODIES
Objects around us do not show the presence of any charge upon them. If you move your plastic pen over bits of paper, they remain undisturbed. This shows that there is no charge either on the plastic or on the bits of paper. These are uncharged bodies.

ACTIVITY
Rub a plastic pen with a piece of paper or a polythene bag or your handkerchief and bring it near the bits of paper. The bits are attracted towards the pen. Pen is now a charged body. The bits of paper remain uncharged.

Take an inflated rubber balloon. Rub it against your woollen pullover and put it against the wall. The balloon gets stuck to the wall. The balloon gets electrically charged on rubbing and gets stuck to the uncharged wall. Repeat the above activities with materials like plastics (a comb, a ruler, a pen, a rod, a sheet, a polythene), glass, lac, rubber, cellophane paper, and a knife blade, aluminium foil and a copper plate. You may observe that objects made of metals like iron, aluminium and copper do not get charged whereas other materials develop a charge on them. We will learn later about the reason for metals not
developing a charge on them. For present you may learn that metals do not hold charge on them since they are the good conductors of electricity.

LEARN THAT
1. Some materials develop charged on them on being rubbed.
2. Some materials like metals do not hold charge when rubbed.
3. It is important to take care that for performing experiments or activities concerning electricity the materials being used are dry. Presence of moisture will not give satisfactory results.

KINDS OF CHARGES, two kinds of electric charges We have observed that a charged object attracts another uncharged body. A rubbed plastic pen is charged and it attracts the uncharged bits of paper. Charged balloons stick to the uncharged wall. Let us find out the way, the two charged bodies behave when they are brought near each other. For performing the experiments we make use of:
(i) a glass rod and a piece of silk, (ii) an ebonite rod and a piece of cat's skin,
(iii) a piece of silk thread, (iv) a heavy based wooden stand with a hook. 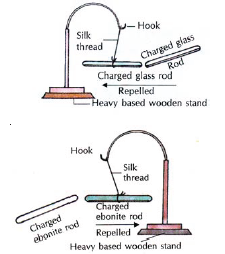