CBSE Class XI Geography Landforms and their Evolution Concepts. Learning the important concepts is very important for every student to get better marks in examinations. The concepts should be clear which will help in faster learning. The attached concepts made as per NCERT and CBSE pattern will help the student to understand the chapter and score better marks in the examinations.

LANDFORMS AND THEIR EVOLUTION

After weathering, geomorphic agents operate the landforms to change. Land form:small to medium rracts or parcels of the earth,s surface are called landorms. Several landforms together are called landscape Each landform has its own shape ,size and materials Geomorphological processes are slow but significant in longrun Every landform has a beginning , they change their shape and composition in course of time. Due to changes in climate and vertical and horizontal movements landforms change their shape. Each landform undergo three stages called youth , mature and old stages Geomorphology is the science of landforms Various geomorphic agents bring the changes to the landforms such as running water, moving ice, wind glaciers, underground water, waves by erosion and deposition. Each geomorphological agent produces its own assemblage of landforms. Most of the geomorphological processes are imperceptible. The study of the landforms reveals that the stage structure and process of land forms They produce erosional and depositional features.

1.In humid regions rainfall is heavy so running water is dominant agent

2.there are two components of running wrter

OVERLAND FLOW: it is also called as sheet erosion Depending on the irregularities of the surface the sheet erosion concentrate in to channels Due to sheer friction of the water narrow channels are formed They are called rills. Rills develop into gullies, gullies further deepen and converted into valleys In the erly stages downward cutting makes waterfalls,cascades in the middle stages streams cut their beds slower and lateral erosion of valley sides becomes severe. Later stages, the flat valley is formed with monodknocks. This type of plain is called peneplain. Stages of the river 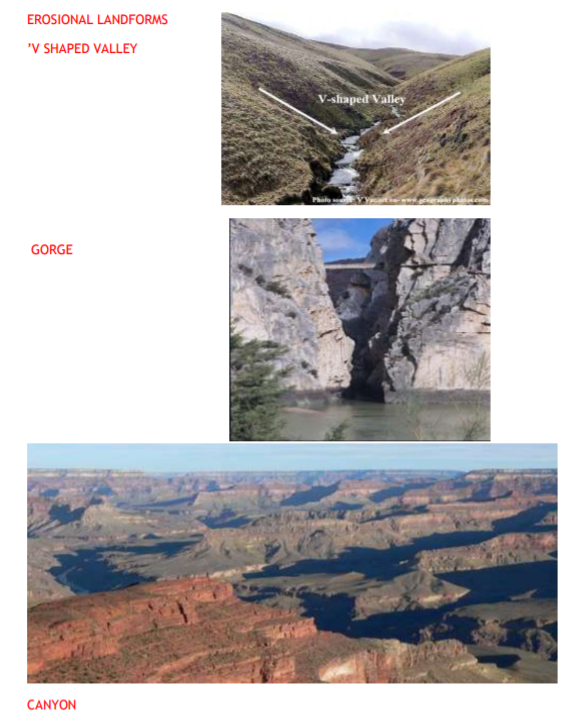 Please click the link below to download pdf file for CBSE Class XI Geography Landforms and their Evolution Concepts.