The network of such channels is called a ‗drainage system‘.

The drainage pattern of an area is the outcome of the geological time period, nature and structure of rocks, topography, slope, amount of water flowing and the periodicity of the flow.

(i) The drainage pattern resembling the branches of a tree is known as ―dendritic‖ the examples of which are the rivers of northern plain.

(ii) When the rivers originate from a hill and flow in all directions, the drainage pattern is Known as ‗radial‘. The rivers originating from the Amarkantak range present a good example of it.

(iii) When the primary tributaries of rivers flow parallel to each other and secondary tributaries join them at right angles, the pattern is known as ‗trellis‘.

(iv) When the rivers discharge their waters from all directions in a lake or depression, the pattern is know as ‗centripetal‘.

The boundary line separating one drainage basin from the other is known as the watershed.

The catchments of large rivers are called river basins while those of small rivulets and rills are often referred to as watersheds.

There is, however, a slight difference between a river basin and a watershed. Watersheds are small in area while the basins cover larger areas.

They are accepted as the most appropriate micro, meso or macro planning regions.

Indian drainage system may be divided on various bases.

On the basis of discharge of water

(orientations to the sea), it may be grouped into:

(i) the Arabian Sea drainage; and

(ii) the Bay of Bengal drainage. 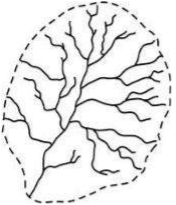 They are separated from eachother through the Delhi ridge, the Aravalis and the Sahyadris (water divide is shown by a line in Figure

77 per cent of the drainage area consisting of the Ganga, the Brahmaputra, the Mahanadi, the Krishna, etc. is oriented towards the Bay of Bengal 23 percent comprising the Indus, the Narmada, the Tapi,the Mahi and the Periyar systems discharge their waters in the Arabian Sea.

On the basis of the size of the watershed,

the drainage basins of India are grouped into three categories:

(i) Major river basins with more than 20,000 sq. km of catchment area. It includes 14 drainage basins such as the Ganga, the Brahmaputra, the Krishna, the Tapi, the Narmada, the Mahi, the Pennar, the Sabarmati, the Barak, etc.

(ii) Medium river basins with catchment area between 2,000-20,000 sq. km incorporating 44 river basins such as the Kalindi, the Periyar, the Meghna, etc.

The Narmada and Tapi are two large rivers which are exceptions originating form central highlands.

the Indian drainage may also be classified into the Himalayan drainage and the Peninsular drainage.

1. The Himalayan drainage system has a long geological history.

2. the important rivers are Ganga, the Indus and the Brahmaputra rivers.

3. Since these are fed both by melting of snow and precipitation, rivers of this system are perennial.

EVOLUTION OF THE HIMALAYAN DRAINAGE

1.Geologists believe that a mighty river called Shiwalik or Indo-Brahma traversed the entire longitudinal extent of the Himalaya from Assam to Punjab and onwards to Sind, and finally discharged into the Gulf of Sind near lower Punjab during the Miocene period some 5-24 million years ago

2. The remarkable continuity of the Shiwalik and its lacustrine origin and alluvial deposits consisting of sands, silt, clay, boulders and conglomerates support this viewpoint. in due course of time Indo– Brahma river was dismembered into three main

(i) the Indus and its five tributaries in the western part;

(ii) the Ganga and its Himalayan tributaries in the central part; and

(iii) the stretch of the Brahmaputra in Assam and its Himalayan tributaries in the eastern part. The dismemberment was probably due to the Pleistocene upheaval in the western Himalayas, including the uplift of the Potwar Plateau (Delhi Ridge), which acted as the water divide between the Indus and Ganga drainage systems. Likewise, the down thrusting of the Malda gap area between the Rajmahal hills and the Meghalaya plateau during the mid-pleistocene period, diverted the Ganga and the Brahmaputra systems to flow Towards the Bay of Bengal.

2. The Indus also known as the Sindhu, is the westernmost of the Himalayan rivers in India.

4. In Tibet, it is known as ‗Singi Khamban; or Lion‘s mouth. After flowing in the northwest direction between the Ladakh and Zaskar ranges, it passes through Ladakh and Baltistan.

5.It cuts across the Ladakh range, forming a spectacular gorge near Gilgit in Jammu and Kashmir.

6. It enters into Pakistan near Chillar in the Dardistan region. Find out the area known as Dardistan.

7. tributaries such as the Shyok, the Gilgit, theZaskar, the Hunza, the Nubra, the Shigar, the Gasting and the Dras.

9. It finally emerges out ofthe hills near Attock where it receives the Kabul river on its right bank.

10.The other important tributaries joining the right bank of the Indus are the Khurram, the Tochi, the Gomal, the Viboa and the Sangar. They all originate in the Sulaiman ranges.

11. The river flows southward and receives ‗Panjnad‘ a little above Mithankot. The Panjnad is the name given to the five rivers of Punjab, namely the Satluj, the Beas, the Ravi, the Chenab and the Jhelum.It finally discharges into the Arabian Sea, east of Karachi. The Indus flows in India only through the Leh district in Jammu and Kashmir.

1. The Ganga is the most important river of India both from the point of view of its basin and cultural significance.

2. It rises in the Gangotri glacier near Gaumukh (3,900 m) in the Uttarkashi district of Uttarakhand.