This chapter deals with 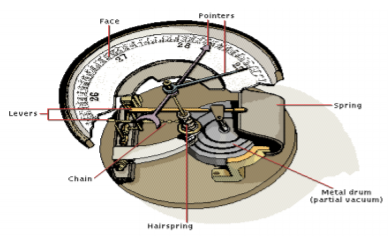 The pressure decreases with height. At any elevation it varies from place to place and its variation is the primary cause of air motion, i.e. wind which moves from high pressure areas to low pressure areas.

In the lower atmosphere the pressure decreases rapidly with height. The decrease amounts to about 1 mb for each 10 m increase in elevation. It does not always decrease at the same rate. Table 10.1 gives the average pressure and temperature at selected levels of elevation for a standard atmosphere.

The vertical pressure gradient force is much larger than that of the horizontal pressure gradient. But, it is generally balanced by a nearly equal but opposite gravitational force. Hence, we do not experience strong upward winds.

Small differences in pressure are highly significant in terms of the wind direction and velocity. Horizontal distribution of pressure is studied by drawing isobars at constant levels. Isobars are lines connecting places having equal pressure. In order to eliminate the effect of altitude on pressure, it is measured at any station after being reduced to sea level for purposes of comparison.

The world distribution of sea level pressure in January and July has been shown in Figures 10.2 and 10.3. Near the equator the sea level pressure is low and the area is known as equatorial low. Along 30° N and 30 °S found the high-pressure areas known as the subtropical highs. Further pole wards along 60°N and 60°S, the low-pressure belts are termed as the sub polar lows. Near the poles the pressure is high and it is known as the polar high. These pressure belts are not permanent in nature. They oscillate with the apparent movement of the sun. In the northern hemisphere in winter they move southwards and in the summer northwards.

Forces Affecting the Velocity and Direction of Wind

You already know that the air is set in motion due to the differences in atmospheric pressure. 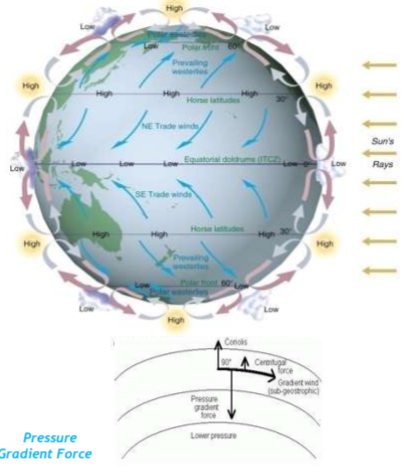 The horizontal winds near the earth surface respond to the combined effect of three forces – the pressure gradient force, the frictional force and the Carioles‟ force. In addition, the gravitational force acts downward. 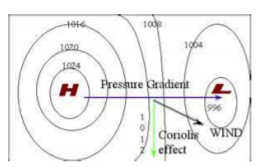 • It affects the speed of the wind. It is greatest at the surface and its influence generally extends up to an elevation of 1 - 3 km. Over the sea surface the friction is minimal. 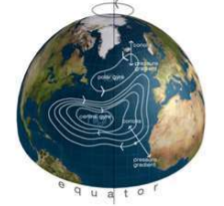 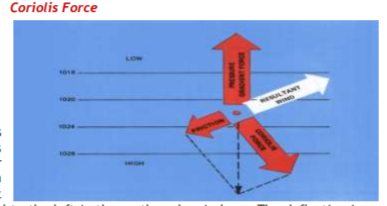