CBSE Class 9 Qualitative Passage Based MCQs (1). Chapter wise Multiple Choice Questions (MCQs) are being given by teachers to students to make them understand the chapter concepts. Its extremely critical for all CBSE students to practice all MCQs which will help them in gaining better marks in examinations. All assignments available for free download on the website are developed by the best teachers having many years of teaching experience in CBSE schools all over the country. Students, teachers and parents are advised to download the CBSE study material.

Rachna has in her kitchen 17 spoons, 3 serving spoons, 22 quarter plates, 25 full plates, 11 forks, 2 lighters and 42 boxes. Some of these boxes contain spices, 7 of the boxes contain pulses and 4 boxes contain rice. Two boxes have ghee and three boxes have oil in them. In this way Rachna‟s kitchen is full of variety of things.

On the basis of your reading of the passage answer the questions given below :

1. How many utensils are there in Rachna‟s kitchen?

2. What percentage of boxes of pulses are there in the kitchen?

3. What is the ratio of rice boxes to the remaining boxes in the kitchen?

4. How many more boxes of pulses arethere other than rice boxes in the kitchen?

A survey was conducted among 1200 people of Delhi speaking different languages, which is shown in the given figure. Calculate the following as per given figure. 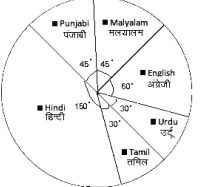 3. How many people speak Hindi and Tamil both together?
(i) 180 (ii) 600 (iii)280 (iv) 380
4. How many more people speak English than Malyalam?
(i) 25 (ii) 50 (iii) 76 (iv) 67
Passage No. 3
The phenomenon of change of a liquid into its vapour at any temperature below its boiling point is called evaporation. Wet clothes dry up in air due to the evaporation of water. Rate of evaporation increases with increase in temperature. The particles in a liquid have different kinetic energies. Some particles have lower kinetic energies and other have higher kinetic energies. The particles having higher kinetic energies at the surface of the liquid overcome the forces of attraction of other particles, leave the surface and get converted into vapour. Evaporation is continuous process and particles keep on escaping the surface of the liquid.
1. At what temperature evaporation takes place?
(i) At boiling point
(ii) Above boiling point (iii) At room temperature (i) Below boiling point
2. How do wet clothes dry-up?
(i) Due to condensation
(ii) Due to evaporation
(iii) Due to surface tension
(iv) Due to temperature
3. What is the effect of temperature on evaporation?
(i) Increases with temperature (ii) Decreases with temperature (iii) No effect of temperature (iv) None of these
4. What type of energy do the particles have in a liquid?
(i) Electrical energy (ii) Potential energy (iii) Kinetic energy (iv) Radiation energy
Passage No. 4
The measures adopted in health arena have increased the life expectancy to over 64 years in 2000. Infant mortality rate (IMR) has come down from 147 in 1951 to 75 in 2000. Crude birth rates have dropped to 26.1 and death rate to 8.7 within the same duration of time. Increase in life expectancy and improvement in childcare are useful in assessing the future progress of the country.
1. How much did the life expectancy increase in the year 2000?
(i) 47 (ii) 75 (iii) 26 (iv) 64
2. What percentage of the infant mortality rate fell during 1951 to 2000?
(i) 48.9 % (ii) 50% (iii) 51% (iv) 51.9 %
3. How much has been the growth rate between 1951 to 2000?
(i) 8.7 (ii) 17.4 (iii) 26.1 (iv) 64
4. How much did the death rate reach in 2000?
(i) 7.5 (ii)8.7 (iii) 6.4 (iv) 6.2