CBSE Class 9 PSA Quantitative Passage Based MCQ (1). Based on CBSE and NCERT guidelines. The students should practice these Sample Papers to gain perfection which will help him to get more marks in CBSE examination.  Based on the same pattern as released by CBSE every year. CBSE releases sample papers every year. These papers are released prior to the CBSE examinations so that students can do practice.

Rachna has in her kitchen 17 spoons, 3 serving spoons, 22 quarter plates, 25 full plates, 11 forks, 2 lighters and 42 boxes. Some of these boxes contain spices, 7 of the boxes contain pulses and 4 boxes contain rice. Two boxes have ghee and three boxes have oil in them. In this way Rachna’s kitchen is full of variety of things.

On the basis of your reading of the passage answer the questions given below :

1. How many utensils are there in Rachna’s kitchen?

2. What percentage of boxes of pulses are there in the kitchen?

3. What is the ratio of rice boxes to the remaining boxes in the kitchen?

4. How many more boxes of pulses are there other than rice boxes in the kitchen?

A survey was conducted among 1200 people of Delhi speaking different languages, which isshown in the given figure. Calculate the following as per given figure. 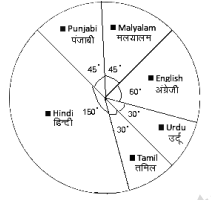 3. How many people speak Hindi and Tamil both together?

4. How many more people speak English than Malyalam?

Evaporation is continuous process and particles keep on escaping the surface of the liquid.

1. At what temperature evaporation takes place?

(i) At boiling point

(i) Due to condensation

(ii) Due to evaporation

(iii) Due to surface tension

(iv) Due to temperature