Class 9 Biology students should refer to the following concepts and notes for Natural Resources in standard 9. These exam notes for Grade 9 Biology will be very useful for upcoming class tests and examinations and help you to score good marks

1) All life-forms on Earth require Sun’s energy as well as the resources on Earth like land, water and air to survive.

2) Life is possible only in the biosphere, where the atmosphere, lithosphere and hydrosphere interact.

3) Biosphere comprises of biotic and abiotic factors, which interact with each other and maintains a balance.

4) Life on Earth is responsible for the present atmosphere of Earth, consisting of gases like nitrogen, oxygen, carbon dioxide and water vapour.

5) Atmosphere plays a significant role in climate control. It prevents undue fluctuations in temperature during day and night as well as throughout the year.

6) Formation of winds occurs as follows:

i) As the Sun unevenly heats the various regions on the Earth’s surface, air expands and rises over the hotter regions; and condenses and sinks over the cooler regions.

iii) This results in formation of regions of low and high pressure.

8) The wind patterns in a particular region direct the rainfall patterns of that region.

11) Water exists in solid, liquid and gaseous forms. It occurs in atmosphere, on land surface as well as underground.

12) Water is important to living organisms because:

i) All cellular processes require an aqueous medium.

ii) Dissolved substances are needed for body reactions as well as for transportation.

13) Osmoregulation is carried out by all organisms to sustain life.

14) There is direct relationship between availability of water and the species richness as well as number of members of each species present in a given region.

15) Water pollution is caused by addition of following to water bodies:

i) Fertilizers and pesticides

17) Reducing the dissolved oxygen and nutrients from water bodies is harmful for the aquatic organisms.

19) Weathering of rocks due to physical, chemical and biological processes finally produces the fine particles of soil over long periods of time.

20) The continuous, uneven expansion and contraction of different parts of the rocks during day and night leads to crack formation, followed by breakdown of the large rock pieces into smaller ones

21) Freezing of water in cracks of rocks causes widening of the cracks.

23) Strong wind is another factor resulting in soil formation.

24) Both water and wind deposits soil away from the parent rocks.

25) Soil formation is also carried out by living organisms. Materials released by lichens growing on rock surface powder down the surface, forming soil. Further breakdown of rocks is caused by growth of other small plants in such soil as well as the entry of tree roots into the cracks of rocks.

26) Soil is a mixture of rock particles, humus and microscopic and small organisms.

27) Humus aerates the soil and keeps it porous.

28) The nutrient and humus content of the topsoil influences the biodiversity of a region.

29) An important cause of soil pollution is the recent agricultural methods, which destroys soil structure by killing the nutrient recycling soil microorganisms as well as the earthworms.

31) Biogeochemical cycles make possible the transfer of energy and matter amid the various components of the biosphere, leading to a balance between them.

32) In addition to evaporation of water from water bodies, water is also added to atmosphere through transpiration and respiration carried out by living organisms.

33) Condensation of atmospheric water leads to rain and snow.

35) Flowing water transport nutrients from one place to another and eventually to the sea.

36) Nitrogen is a vital element found in all living organisms.

39) Plants utilise nitrates and nitrites to produce proteins, nucleic acids and vitamins, which are then passed on to the consumers.

41) Denitrification, carried out by certain bacteria, releases nitrogen back to atmosphere.

42) Carbon occurs in elemental form as well as in organic and inorganic compounds. The basic structure of all life molecules like carbohydrates, proteins, fats, nucleic acids and vitamins is composed of carbon.

43) Carbon dioxide is fixed by green plants during photosynthesis as well as by marine animals during shell formation.

46) Carbon dioxide is an important green house gas that prevents the escape of heat from Earth and causes global warming.

47) Oxygen exists on Earth in elemental form as well as in combined form.

49) The process of respiration, combustion and formation of nitrogen oxides utilizes atmospheric oxygen.

50) Photosynthesis returns oxygen back to atmosphere.

51) Ozone is present in the upper atmospheric strata and contains 3 atoms of oxygen.

52) The ozone layer absorbs the Sun’s harmful ultraviolet radiations, thus preventing them from reaching the Earth’s surface and damaging life.

53) CFCs and other man-made compounds react with the ozone molecules and causes ozone layer depletion.

54) We should work towards preventing ozone layer depletion.

55) Our natural resources should be used in a sustainable manner so as to prevent their depletion and pollution.

1) Lithosphere – The outer crust of the Earth.

2) Hydrosphere – The region which includes all the earth's liquid water, frozen water and small amounts of water vapor in the earth's atmosphere.

3) Atmosphere – The mass of air surrounding the Earth.

4) Biosphere – The life-supporting zone of the Earth where the atmosphere, hydrosphere and lithosphere interact and make life possible.

5) Biotic factors – The living components of the environment.

6) Abiotic factors – The non-living components of the environment.

7) Wind – Movement of air from an area of high pressure to an area of low pressure.

8) Air pollution - The presence of particulates, noxious gases, or other impurities in the air that harm human or environmental health.

9) Smog – The combination of smoke particles with the tiny droplets of fog.

10) Acid rain - Rain that has become acidic due to mixing with acids like sulphuric and nitric acid that are released into the atmosphere by the burning of fossil fuels.

11) Osmoregulation - Control of water and electrolyte balance in the body.

12) Humus – The highly decomposed residue of living materials that is a part of soil.

13) Topsoil – The topmost layer of soil that contains humus and living organisms in addition to soil particles.

14) Soil pollution- Removal of useful soil components and addition of substances which adversely affect the soil fertility and harm the biodiversity living in it.

15) Biogeochemical cycle – The cyclic transformation of chemicals through interacting biological, geological and chemical processes that causes transfer of energy and matter amid the various components of the biosphere, leading to a balance between them.

16) Water cycle – The whole process in which water evaporates and falls on the land as rain and later flows back into the sea via rivers.

17) Nitrification – The process of converting reduced nitrogen (as ammonia or ammonium) to its more oxidized forms (nitrite or nitrate ions).

18) Denitrification – A process in which anaerobic bacteria convert nitrate ions into nitrogen gas.

19) Ammonification – The process in which organic forms of nitrogen are converted into ammonia or ammonium ion by heterotrophic bacteria.

20) Green house effect – The process in which green house gases like carbon dioxide, cause thermal radiation emitted by the Earth's surface to be reflected back down, therefore causing the increase in worldwide average temperatures.

21) Global warming - An increase in the average temperature of the earth's atmosphere, brought about by the enhanced greenhouse effect. 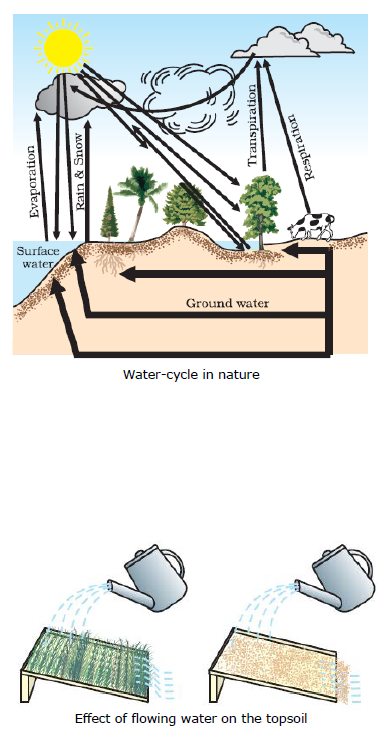 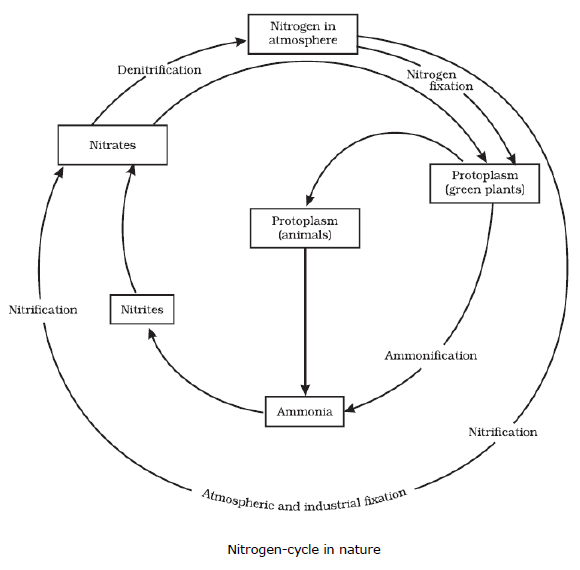 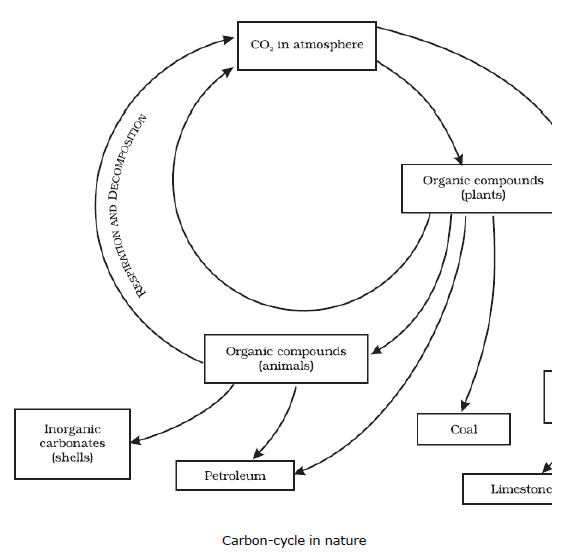 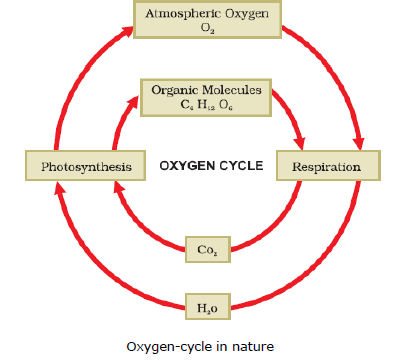 Download past year Question Papers for Class 9 Biology as per CBSE NCERT KVS syllabus with solutions in pdf free
More..

Download Free printable worksheets for Class 9 Biology designed by expert teachers for all important chapters and topics and is available for free download in...
More..