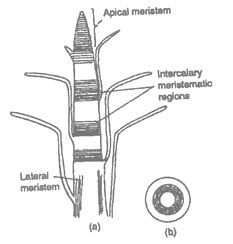 (i)Main features of Meristematic tissues are :

(A)Apical meristem: It is present at the growing tips of stems and roots. Cell division in this tissue leads to the elongation of stem & root thus it is involved in primary growth of the plant.
(B)Intercalary meristem: It is present behind the apex. It is the part of apical meristem which is left behind during growth period. These are present at the base of leaf & internode region. These lead to the increase in the length of leaf (Primary) e.g. in grass stem, bamboo stem, mint stem etc..
(C)Lateral meristem: It is also called as secondary meristem. It occurs along the sides of longitudinal axis of the plant. It gives rise to the vascular tissues. Causes growth in girth of stem & root. They are responsible for secondary growth.

Depending Upon the structure and composition, The permanent tissues are classified into two types :

(i)Simple permanent tissues : Theses are made up of same type of cells which are similar structurally and functionally. They include two types of tissue :

I Protective Tissues : these tissue are primarily protective in function. They consist of :

II.Epidermis : Epidermis forms one cell thick outermost layer of various body organs of plants such as leaves, flowers, stems and roots. Epidermis is covered  outside by cuticle. Cuticle is a water proof layer of waxy substance called as cutin which is secreted by the epidermal cells. Cuticle is very thick in xerophytes. Cells of epidermis of leaves are not continuous at some places due to the presence of small pores called as stomata. Each stomata is guarded by a pair of bean shaped cells called as guard cells. These are the only epidermal cells which possess chloplasts, the rest being colorless.

I.The main function of epidermis is to protect the plant from desiccation and infection.

II.Cuticle of epidermis cuts the rate of transpiration and evaporation of water and prevents wilting.

V.Cork or phellem : in older roots and stems, tissues at the periphery become cork cells or phellem cells. Cork is made up to dead cells with thick walls and do not have any intercellular spaces. The cell walls in cork deposit waxy substance called as suberin. The cells of cork become impermeable to water and gasses due to the deposition of suberin. The cork cells are without any protoplasm but are filled with resins or tannins.

(B)Supporting tissue : These are supportive in function and of three types 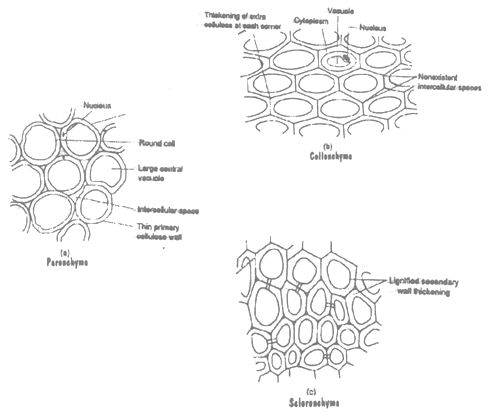 I.Parenchyma: it is the fundamental tissue.

VII.Some parenchyma involved in excretory substance storage are so called as idioblast, storing such as resin, tannin, gums & oils. In typical parenchyma chlorophyll is absent.

XI.Collenchyma : it is the living mechanical tissue.

XV.Present only in herbaceous dicot stem.

XVI.Present at thin margin of leaves.

XVII.Few chloroplasts may be present.

XXI.Composed of extremely thick walled cells with little or no protoplasm.

XXV.Cells of Sclerenchyma are of two types :

XXVI.Sclereids: These are also called grit cells or stone cells. Theses are small cells, where lumen is so small due to higher thickening of cell wall, as present in drup fruit (Mango, coconut walnut) in legume seeds (Macrosclereid)

XXVII.Fibers : They are very long, narrow, thick, lignified cells. Lumen is large as compared to sclereids. Generally 1-3 mm. long. In the thick walls of both the fibres and sclereids are present thin areas called as pits.

XXVIII.Sclerenchyma fibres are used in the manufacture of ropes, mats & certain textile fibres.

XXIX.Jute & coir are obtained from the thick bundles of fibres.

XXX.Complex permanent tissue : it consists of more than one type of cells which work together as a unit.

XXXII.It is also know as conducting or vascular tissue.

(A)Xylem : Also known as wood and is a vascular and mechanical tissue. Thick walled cells are found in the form of tubular passages. 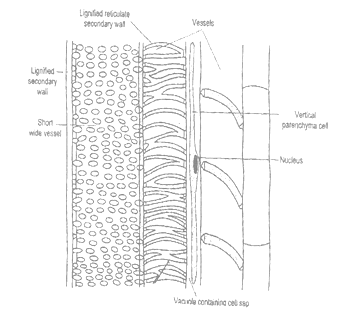 I. Xylem consists of four types of cells called as elements :

III.Vessels: they are advance element (Generally found in angiosperms).Vessels are cylindrical tube like structures placed one above the other end to end which form a continuous channel for efficient conduction of water.

V.Subjected for storge of starch (food).

VII.Except xylem parenchyma all other xylem elements are dead.

X.The annual rings present in the trunk of a tree are xylem rings. By Counting the number of annual rings we can determine the age of a tree. 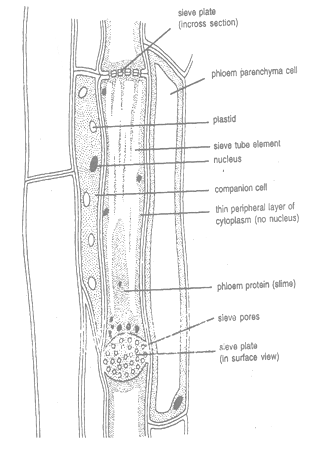 II.Sieve tubes : Sieve tubes are slender tube like structures made up of elongated, thin walled cells placed end to end. The end walls of sieve tube cells are perforated by numerous pores are called as sieve plates. Nucleus of sieve cell degenerates at maturity, however. Cytoplasm persists, because of protoplasmic continuation of sieve tube with companion cell through plasmodesmata. Sieve cells possess slime protein or protein which is concerned with growth and repair of sieve cells.

IV.Sieve cells & companion cells are so called sister cells because they originate from single mother cell.

V.Phloem fibre : They give mechanical support to sieve tubes

VII.Leptome : main part of phloem involved in conduction of food, which is sieve tube.

IX.In phloem except phloem Sclerenchyma all elements are living. 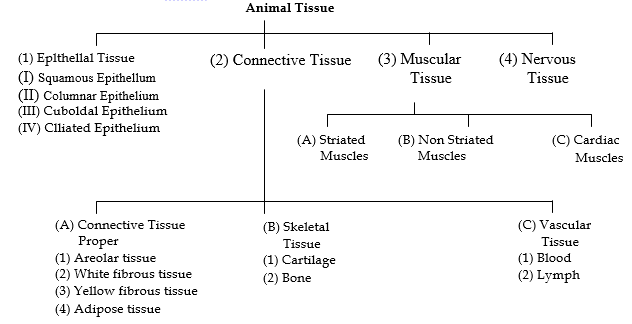 (b)Cubical epithelium : They are cube like cells that fit closely, cells look like squares in section, but   free surface appears hexagonal.

The cells of the connective tissue are widely spaced and embedded in an intercellular matrix.

(A)Bone :Matrix of bone is very hard because of salts such as calcium phosphate, CaCO3 (60-70%) etc. and a protein ossein. Bone cells (osteoblasts) are embedded in this hard matrix. Matrix is deposited in the form of concentric layers of lamellae formed round a central canal (Haversian canal), the done cells occupy small spaces between the concentric layers of matrix. The long bones are usually hollow containing cavity called as marrow cavity. It is full bone marrow.

(B)Cartilage : This tissue is elastic, less harder as compared to bone. Elasticity is due the presence of chondrin (protein). Cells are called as chondroblast, which are widely spaced and matrix is reinforced by fibres. It occurs at joint of bones, in the nose, ear, trachea & larynx. It provides flexibility and great tensile strength.

It is future divided into following types:

(D)Areolar tissue : It is the most distributed connective tissue in the body. This tissue fills spaces inside organs & is found between the skin & muscles, around blood vessels, nerves & in the bone marrow.

(A)Adipose tissue : These are oval & round cells, filled with fat globules. The cells are called as adipocytes. It found in subcutaneous layer below the skin, around the heart, brain & below the eyeballs. It acts as an insulator & prevents loss of heat from the body.

(B)White fibrous connective tissue : They are very little matrix containing abundant white fibres forming layers. Bundles of this tissue are called as tendons, which attaches muscles to the bones.

(C)Yellow fibrous connective tissue : They are very elastic due to the presence of a network of yellow fibres in it’s matrix called as ligament which attaches bone to bone

Movements are brought about in our body with the help of muscular tissues.

It is of three types :

(i)Striated muscles : They are also called as voluntary muscles because these are under the control of one’s will. Muscle fibres or cells are multinucleated and unbranched. Each fibra enclosed by thin membrane which Is called as sarcolemma. Cytoplasm is called as sarcoplasm. These Muscles get tired & need rest. 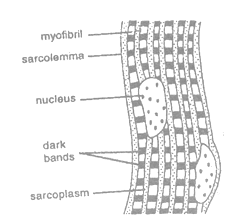 (ii)Non striated muscles: They are involuntary muscles also called as smooth muscles. These muscle fibres are uninucleated & spindle shaped. They are not enclosed by membrane but many fibres are joined together in bundles. Such muscles are found in the walls of stomach, intestine, urinary bladder, bronchi, iris of eye etc. peristaltic movements in alimentary canal are brought about by smooth muscles. 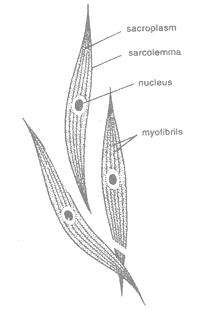 (iii) cardiac muscle fibres : They are also involuntary muscles. Only found in the walls of heart. Their structure is in between the striated & non-striated muscles. They are uninucleated & branched. Branches are united by intercalated disc. In these muscles rhythmic contraction & relaxation occurs Thought the life 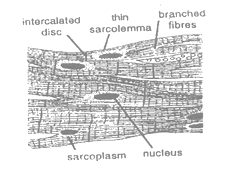 Nerve fibres are of two types : 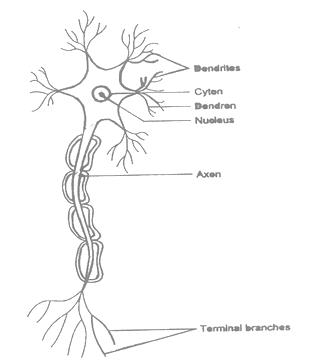 (i)They control all the body activities

(ii)They co-ordinate between various parts during any body function.

Spinal cord & brain are made up of nervous tissue.

Access CBSE Class 9 Science MCQs for MCQs for important topics for all chapters in MCQs based on CBSE and NCERT pattern. Access full database of...
More..