Class 9 Social Science Poverty As Challege Exam Notes. Please refer to the examination notes which you can use for preparing and revising for exams. These notes will help you to revise the concepts quickly and get good marks.

Poverty : It is the situation in which person is unable to get minimum basic necessities of life i.e., food, clothing and shelter for his or her sustenance.

Mass Poverty : When a large section of people in an economy are deprived of these basic necessities, that economy is said to be in mass poverty.

Poverty is used in two ways.

Two indicators of Relative Poverty are

According to a report submitted by UNO those countries are treated as per whose poor capita  income is less than US $ 725 per annum.

Absolute poverty : It refers to the measure of poverty keeping in view the per capita intake of calories and minimum level of consumption.

National Income : It is the total value of goods and services produced with in the country plus net income from abroad.

There are two approaches by which the number of poor is estimated :

(A) Under expenditure method first of all the minimum nutritional food requirement for survival is  estimated.

(B) The food value is converted to calories.

(C) The caloric value of food is then converted to money value i.e.rupees.

(D) A minimum amount of money which is required for purchasing cloth and other necessities is added to the money value of food.
(E) The total equivalent amount is considered as poverty line.
(F) All those families which spent less than the poverty line families.
2. Income Method :
A person is considered poor if his or her income or consumption level falls. Below as given minimum level necessary to fulfill basic needs. Each country uses an imaginary line that is considered appropriate for its existing level of development and its accepted minimum social norms.
(A) This method is used by the government while distributing food through Public Distribution System at the local level.
(B) Under this a poverty line is fixed by the government. For example for the year 1999-2000 it was fixed at Rs. 328 per capita per north for rural areas and Rs. 454 per capita per month for Urban areas.
(C) All the families whose total income in a month is less than the poverty line fixed by the government are considered Below Poverty Line (BPL).
♦ Poverty Estimates : It is the line which indicates the level of purchasing power required to satisfy the minimum need of person. In other words it represents the capacity to satisfy the minimum level of human needs.
The line divides the population in two groups, one of those who have this purchasing power or more is known as Above Poverty Line and other group of those people who do not have this much of purchasing power is known as Below the Poverty Line.
The number of persons living below the poverty line in 2001-02 was 26.02 crore. Among them 19.32 crore are living in rural area and 6.7 crore in urban areas. In 1973-74 about 55 % of India’s population was living below poverty line. 1999-2000, this has come down to 26 %. This means only about a quarter of the population in India is now living below poverty line.
→VULNERABLE GROUPS
→Vulnerability : Vulnerability to poverty is a measure, which describes the greater probability of certain communities (say, members of a backward caste) or individuals (such as a widow or a physically handicapped person) of becoming, or remaining, poor in the coming years. Vulnerability is determined by the options available to different communities for finding an alternative living in terms of assets, education, health and job opportunities. Further, it is analysed on the basis of the greater risks these groups face at the time of natural disasters (earthquakes, tsunami), terrorism etc.
→ Who are Vulnerable :Poverty and occupation both are co-related. Most of the poor people include agricultural and casual labourers, the tribals and the disabled or the physically challenged. According to the
estimates of Planning Commissions agricultural labour house hold constitute 25 % of the total labour house hold and of these 57.60 % live below poverty line. In those states where agricultural labourers are a great share, Poverty is also higher. In case of Urban poor, the poverty occurs primarily due to the outflow of the rural poor into Urban areas. The casual workers, the unemployed daily wage earners, domestic servants, Rickshaw Pullers, Hotel and Restaurant Workers fall in the category of the urban poor.

Poverty in India also has another aspect or dimension. The proportion of poor people is not the same in every state. Recent estimates show that in 20 states and union territories, the poverty ratio is less than the national average. On the other hand, poverty is still a serious problem in Orissa, Bihar, Assam, Tripura and Uttar Pradesh. Orissa and Bihar continue to be the two poorest states with poverty ratios of 47 and 43 per cent respectively. Along with rural poverty urban poverty is also high in Orissa, Madhya Pradesh, Bihar and Uttar Pradesh. States like Punjab and Haryana have traditionally succeeded in reducing poverty with the help of high agricultural growth rates. Kerala has focused more on human resource development. In West Bengal, land reform measures have helped in reducing poverty. In Andhra Pradesh and Tamil Nadu public distribution of food grains could have been responsible for the improvement.
→GLOBAL POVERTY SCENARIO
♦ The proportion of people in developing countries living in extreme economic poverty— defined by the World Bank as living on less than $1 per day—has fallen from 28 per cent in 1990 to 21 per cent in 2001.
Although there has been a substantial reduction in global poverty, it is marked with great regional differences. Poverty declined substantially in China and Southeast Asian countries as a result of rapid economic growth and massive investments in human resource development. In Sub-Saharan Africa, poverty
in fact rose from 41 per cent in 1981 to 46 percent in 2001 (see graph 3.3). In Latin America, the ratio of poverty remained the same. 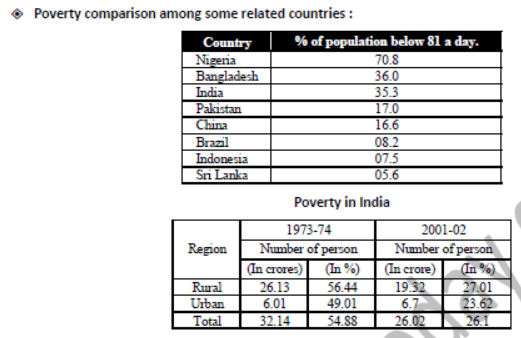