2. Center lines of two meter gauge railway tracks are at a distance of 5m. It is required to connect them by a reverse curve (ogee curve) starting from point A on a t rack to point B on the second track such that the straight line distance is 14 m. The point of tangency of the two curves is 6m from A. Draw the center line of the curve.

4. A) Draw the orthographic projection of the following points on the common XY line. Keep the distance between the two consecutive projectors as 20 mm.
i. D 30mm below HP and 40 mm in front of VP.
ii. E in HP and 40 mm behind VP.
iii. F in VP and 50 mm below HP.
iv. Point J is both on VP and HP.
B). A square lamina ABCD of 30mm rests on its corner C in HP. Its Plane is inclined at 45⁰ to XY line such that its diagonal DB is parallel to HP inclined at 30⁰ to VP. Draw its projections when the corner is towards VP and 15 mm in front of it.

5. A triangular prism of base 50 mm and axis 60 mm long has its base on the ground and one of its rectangular faces is parallel to VP. It is cut by a section plane perpendicular to VP inclined at 60⁰ to HP and passing through the axis 20 mm below the top end. Draw the front view, sectional top view and the true shape of the section.

6. A right regular pentagonal pyramid edge of base 30 mm and axis 60 mm long is resting on HP on one of its triangular faces and the edge of the base contained by the triangular face makes an angle of 30⁰ with VP. Draw its orthographic projections.

7. Draw the front view, top view and development of a cylinder of diameter 25 mm and height 50mm.

9. Draw the front, top and left side view of the machine block. Give all dimensions 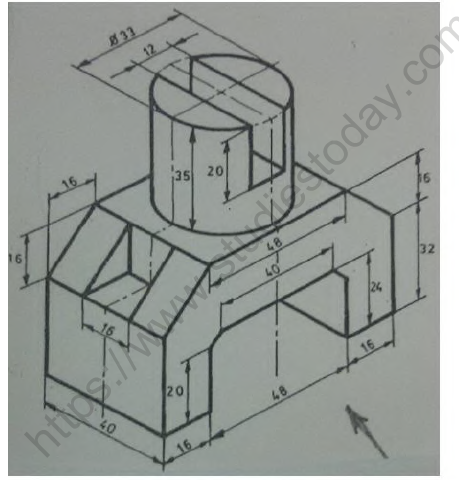