Class 9 Social Science students should refer to the following concepts and notes for Poverty as Challenge in standard 9. These exam notes for Grade 9 Social Science will be very useful for upcoming class tests and examinations and help you to score good marks

POVERTY
It is a state of helplessness. It is a situation in which one is unable to get even the minimum basic necessities of life such as food, clothing, and shelter for his/her sustenance.
I. Poverty social indicators of poverty
i. Illiteracy level
ii. Lack of general resistance
iii. Due to malnutrition
iv. Lack of access to healthcare
v. Lack of job opportunities
vi. Lack of access to safe drinking water, sanitation etc.
II. Methods to measure poverty:
a) Income
b) Consumption level
III. Poverty Line: It is an imaginary line that expresses the income that is required to purchase the minimum subsistence needs of a person. It is a line that demarcates the population into poor and non-poor.
IV. ESTIMATION OF POVERTY LINE IN INDIA
1. A minimum level of food requirement, clothing, footwear, fuel and light, educational and medical requirement etc. are determined for subsistence.
2. These physical quantities are multiplied by their prices in rupees.
3. The present formula for food requirement while estimating the poverty line is based on the desired calorie requirement.
4. Food items such as cereals, pulses, vegetable, milk, oil, sugar etc. together provide these needed calories.
5. The calorie needs vary depending on age, sex and the type of work that a person does.
6. The accepted average calorie requirement in India is 2400 calories per person per day in rural areas and 2100 calories per person per day in urban areas.
7. People living in rural areas engage themselves in more physical work, calorie requirements in rural areas are considered to be higher than urban areas.
V. Poverty Scenario from 1973:
1. There is substantial decline in poverty ratios inIndia.
2. There has been a decline from 55% in 1973 to about 45 per cent in 1993-94.
3. It further declined to 37.2 per cent in 2004-05.
4. The proportion of people below poverty line further came down to about 21.9 per cent in 2011-12.
5. If the trend continues, people below poverty line may come down to less than 20 per cent in the next few years.
6. Although the percentage of people living under poverty declined in the earlier two decades
7. (1973–1993), the number of poor declined from 407.1 million in 2004-05 to 269.3 million in 2011-12 with an average annual decline of 2.2 percentage points during
8. 2004-05 to 2011-12.
VI. Inter- state disparity:
1. State level poverty has witnessed a secular decline from the levels of early seventies;
2. The success rate of reducing poverty varies from state to state.
3. In 20 states and union territories, the poverty ratio is less than the national average.
4. High Poverty in Orissa, Bihar, Assam, Tripura and Uttar Pradesh.
5. Orissa and Bihar continue to be the two poorest states with poverty ratios of 47 and 43 per cent respectively.
6. significant decline in poverty in Kerala, Jammu and Kashmir, Andhra Pradesh, Tamil Nadu, Gujarat and West Bengal.
7. Punjab and Haryana have traditionally succeeded in reducing poverty with the help of high agricultural growth rates.
8. Kerala has focused more on human resource development.
9. In West Bengal, land reform measures have helped in reducing poverty.
10. Andhra Pradesh and Tamil Nadu public distribution of food grains could have been responsible for the improvement 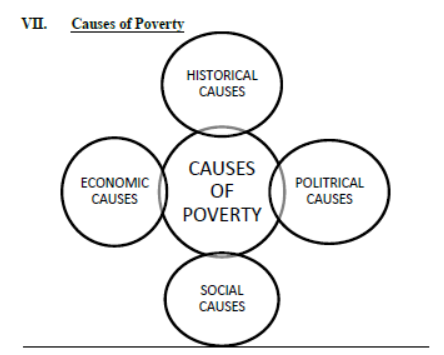 XI. The countries use different poverty line because-

a) Poverty line varies from time and space.

c) Eg: In USA who does not own a car is considered a poor while in India owning a car is a luxury.

1. Greater chances of certain people or group of people communities of becoming poor or remaining poor.

2. It also means that certain people like widow, physically disabled are more prone to poverty in uncertain situations like natural disaster or calamities.

3. It reflects lack of alternatives and social and economic inability to handle risk.

4. Vulnerable groups have higher probability of getting affected than others in bad times.

5. It is determined by the availability of options for finding an alternative living in terms of assets, education health.

1. Social exclusion involves denial of fair rights and opportunities to certain groups like Schedule Castes and Schedule Tribes which are enjoyed by the majority group.

2. It means when an individual or group of people are distanced from the mainstream society.

3. It results in inability of the excluded group to participate in basic political, social and economic functions of the society.

4. Social exclusion is both a cause and consequence of poverty.

5. Eg: social exclusion in India is practiced on the basis of caste system and untouchability. Thus leading to lower castes to live in poverty.