Class 9 Social Science students should refer to the following concepts and notes for India Size And Location in standard 9. These exam notes for Grade 9 Social Science will be very useful for upcoming class tests and examinations and help you to score good marks

India is a vast country. LYING ENTIRELY IN THE Northern hemisphere the main land extends between latitudes 8o4’ N and 37o 6’ and longitudes 68o 7’ E 97o 25’ E. the Tropic of Cancer (23o 30’N) divides the country into almost two equal parts. To the southeast and southwest of the mainland, lie the Andaman and Nicobar islands in Bay of Bengal and the Lakshadweep islands in the Arabian Sea.

the land mass of India has an area of 3.28 million square km. India’s total areas accounts for about 2.4 per cent of the total geographical area of the world. India is the seventh largest country of the world. India has a land boundary of about 15200 km and the total length of the coast line of the mainland including Andaman and
Nicobar and Lakshadweep is 7516.6 km.

(a) India has a distinct physical and cultural identity:

(i) On its north, India is bounded by lofty mountains. These mountains run east-west for thousands of kilometers. These provide a natural wall against all possible intrusions.

(ii) On the south, India is surrounded by the seas and the ocean from three sides. It means, the land is protected from outside intrusions.

Theses geographical features have ensured that:

(i) people from outside could come only through well-defined routes, whether by sea or through passes in mountains.

(ii) People who came from outside brought with them their cultural elements. these elements came to be assimilated in Indian culture.

(iii) Indian society adapted itself to the new norms.

(iv) Thus, by adopting new norms and values and accepting them as their own, unity and homogeneity came to ‘be promoted. 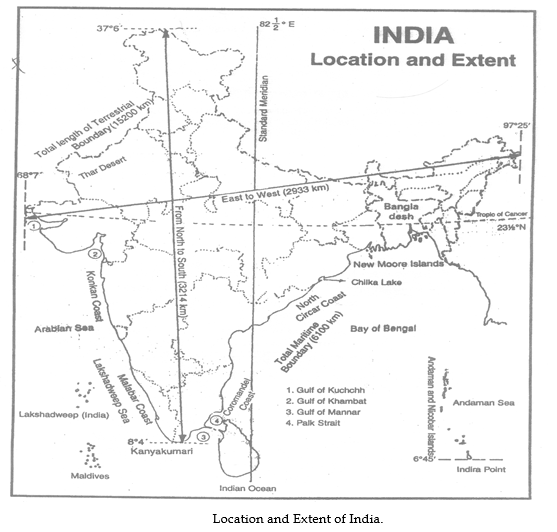 (b) “The north-south extent of India is larger than its east-west extent even through the country’s latitudinal and longitudinal extent in degree es is of the same value.”

The north-south distance between two successive latitudes remains the same or constant, and it is 3214 km is this case. But the east-west distance between the two successive longitudes goes on progressively decreasing from the equator to the poles. This is because all the meridians merge into a single point at the poles. in India the maximum east-west extent therefore is much less than km. it is 2933 km only.

(c) Impact of the longitudinal extent of India:

The earth takes 24 hours to corrupted one rotation (360o) about its axis. It means the earth rotates at the pace of 15 per hour (360o / 24) As the longitudinal extent of India is about 30o longitude the time lag between easternmost and westernmost points of India is of two hours. When it is 6.00 a.m at eastern

(i) It is well divisible by 7 o 30’, a standard adopted by almost all the countries of the world.

(ii) It lies almost in the middle of India, and as such, it suits us the most.

(d) Impact of the Latitudinal extent of India:

Kanyakumari is situated near Equator. here days and nights are almost equal, the maximum difference is 45 minutes only. but as we move farther towards north or south of the Equator, the difference between the length of the day and night becomes progressively larger. in north Kashmir it is as much as 5 hours, as it is far away from the equator.

INDIA AND THE WORLD

(a) Significance of India’s Location:

(i) Very thickly populated parts of the world such as China, Japan and Southeast Asia lie very close to India. This has helped in developing trade and other relations with them.

(ii) The oil rich countries of the Persian Gulf not far from us. we receive bulk of our supplies from them.

(iii) Being at the head of the Indian Ocean, the country occupies a strategic position and commercially favorable location in respect of Africa, Asia Australia.

(iv) The Suez sea-route provides us the shortest route to industrial Europe and America.

(v) The busy air-routes pass through India, connecting east, South East Asia and Australia on the one hand and Europe and America on the other.

(vi) The third largest ocean in the world came to be known as the Indian Ocean because the subcontinent of India stands at the head of this ocean. India was the favorite destination of the traders of the world. 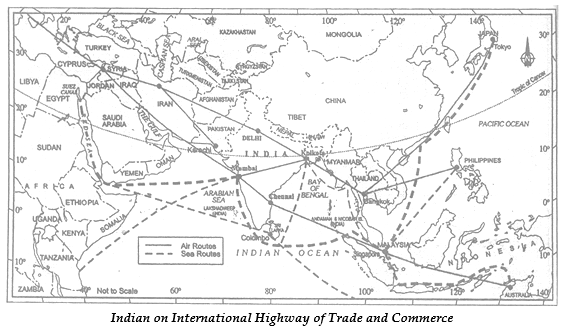 (b) India’s Contacts with the outside World in Ancient and Medieval Times:

India belongs to the Eastern Hemisphere, which contains the oriental world. In ancient times, the sea played an important role in determining the nature of interaction. The central location of India at the head of the Indian Ocean was of great advantage. Countries of East Africa, West Asia, South and South-East

Asia , and East Asia could reached be through sea routes. Hence, India established close cultural and commercial contacts with these countries.

India’s contacts with the outside world have continued through the ages:

(i) The exchanges of ideas and commodities dates back to the ancient times.

(ii) The ideas of the Upanishads, and the Ramayana, the stories of Panchatantras, the Indian numerals and the decimal system could reach many parts of the world.

(iii) The spices, muslin and other Indian goods were taken to different countries.]

(iv) The influence of Greek sculpture, and the architectural styles of dome and minarets from West Asia can be seen in India.

To the north of India are China, Nepal and Bhutan, and to the east, Bangladesh and Myanmar, to the west and northwest are Pakistan and Afghanistan. In the south, separated from India by the Palk Strait, lies the island country of Sri Lanka. To the south of Lakshadweep lies Maldives, Not far the Andaman and Nicobar islands lie our closest South-East Asian neighbours: Indonesia, Malaysia and Thailand. 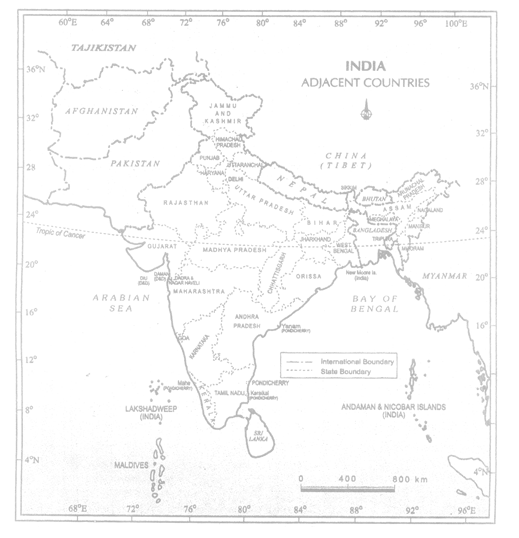 (a) The Indian Subcontinent:

(i) The southernmost point of the Indian Union – ‘Indira Point’ got submerged under the sea water in 2004 during the Tsunami.

(ii) Since the opening of the Suez Canal in 1869, India’s distance from Europe has been reduced by 7000 km.

(iii) Before 1947, there were two types of states in India – the provinces and the princely states. Provinces were ruled directly by British officials who were appointed by the Viceroy. Princely states were ruled by local, hereditary rulers, who acknowledged sovereignty in return for local autonomy.

Question : Choose the right answer from the four alternatives given below.
(i) The Tropic of Cancer does not pass through
(a) Rajasthan
(b) Orissa
(c) Chhattisgarh
(d) Tripura
Answer: (b) Orissa

(iv) If you intend to visit Kavarati during your summer vacations, which one of the following Union Territories of India you will be going to
(a) Pondicherry
(b) Lakshadweep
(c) Andaman and Nicobar
(d) Diu and Daman
Answer: (b) Lakshadweep

(v) My friend hails from a country which does not share land boundary with India. Identify the country.
(a) Bhutan
(b) Tajikistan
(c) Bangladesh
(d) Nepal
Answer: (b) Tajikistan

Question : Answer the following questions briefly.
(i) Name the group of islands lying in the Arabian Sea.
(ii) Name the countries which are larger than India.
(iii) Which island group of India lies to its south-east?
(iv) Which island countries are our southern neighbours?
Answer :
(i) Lakshadweep
(ii) Russia, Canada, China, USA, Brazil and Australia.
(iii) Andaman and Nicobar group of islands.
(iv) Maldives, Sri Lanka.

Question. Write the latitudinal and longitudinal extent of India.

Question. Name the island groups situated to the southeast and southwest of the mainland.

Question. Name the southern neighbours of India across the sea.

Ans. 1. India in the center

3. Nepal in the North

Question. Name the countries that share their land boundaries with India.

Question. Why is Indian sub-continent so called?

Ans. India and the adjoining countries are considered to be a sub-continent as it comprises of all the characteristics of a continent.

• There is also great vastness and diversities in terms of climate, natural vegetation, wildlife and other resources.

• Also, the vivid characteristics of culture and tradition among the people make it a subcontinent.

Question. “India lies to the North-eastern Hemisphere.” Justify the given statement.

Hence, all this proves that India lies in the North-eastern hemisphere.

Question. How do we calculate the time difference from Arunachal Pradesh to Gujarat?

Ans. Sun rays take 4 minutes to cover one longitude. From Arunachal Pradesh to Gujarat there are 30 longitudes (68°7´E to 97°25´E)

Time taken by light to cross a longitude = 4 min

Hence, we can say that the time difference of 2 hours exists from Arunachal Pradesh to Gujarat.

Question. Inspite of the time differences, how does India adopt a uniform time?

Ans. India has a uniform time because we have adopted 82030’ longitude passing through Mirzapur near Allahabad as the standard meridian. Therefore, time along this meridian is accepted as the standard time for whole country. This is done to avoid any confusion that may arise due to difference in time as a result of vast longitudinal extent of India.

Question. The central location of India at the head of the Indian Ocean is considered of great significance. Why?

3. The long coastline of the country in the Indian Ocean gives it an eminent position which justifies the name of the ocean.

Question. How can you say that the land routes of India with other countries are older than her maritime routes?

Ans. 1. The various passes across the mountains in the north have provided passages to the travellers when the oceans restricted such an interaction for a long time.

2. These routes have contributed in the exchange of ideas and commodities in the ancient times like the ideas of the Upnishads, Ramayana, The Indian numerals and the decimal system.\

3. Also, the influence of Greek sculpture, and the architectural styles of domes and minarets can be seen in the different parts of our country.
Therefore, we can say that the land routes of India with other countries are older
than her maritime routes.

Question. Why the difference between the duration of day and night hardly felt at Kanyakumari but not so in Kashmir?

Ans. 1. Due to the vast latitudinal extent of India, the difference between the duration of day and night is hardly felt at Kanyakumari but not so in Kashmir.

2. The tropic of Cancer divides the country almost into tropical and sub-tropical zone.