The streams within a drainage basin from certain patters, depending on the slope of land, underlying rock structure as well as the climatic conditions of the area. These are dendrtelc, trellis, rectangular, and radial patterns. The dendritic pattern develops where the river channel follows the slope of the terrain. The stream with its tributaries resembles the branches of a tree, thus the name dendritic. a river joined by its tributaries, at approximately right angles, develops a trellis pattern. A trellis drainage pattern develops where hard and soft rocks exist parallel to each other. A rectangular drainage pattern develops on a strongly jointed rocky terrain. The radial pattern develops when streams flow in different directions from a central peak or dome like structure. 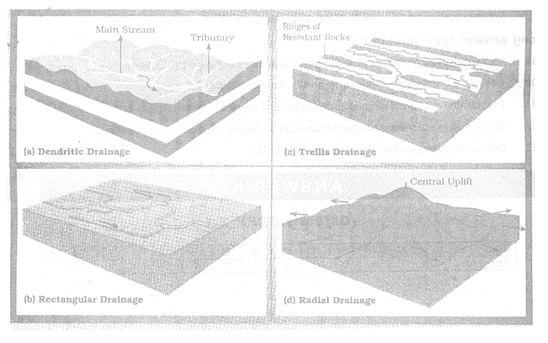 A combination of several patterns may be found in the same drainage basin.

The Drainage systems of India are mainly controlled by the broad relief features of the subcontinent. accordingly, the Indian rivers are divided into two major groups :

(i) The Himalayan Rivers and (ii) The Peninsular Rivers. 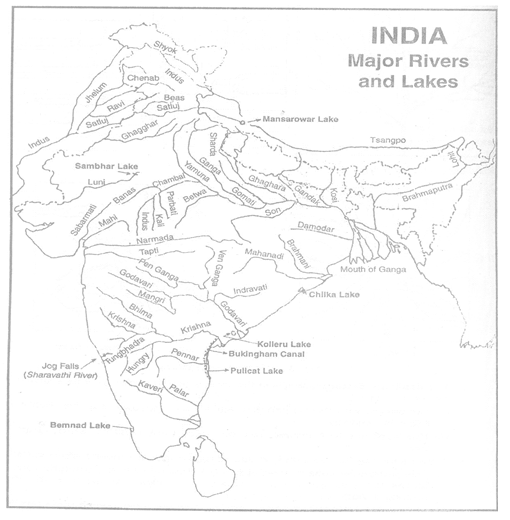 The major Himalayan Rivers are the Indus, the Ganga and the Brahmaputra. These rivers are long, and are joined by many large and important tributaries.

The river Indus rises in Tibet, near Lake Mansarowar. Flowing west, it enters India in the Ladakh district of Jammu and Kashmir. Several tributaries, the Zaskar, the Nubra, the Shyok and the Hunza, Join it in the Kashmir region. The Indus flows through Baltistan and Gilgit and emerges from the mountains at Attock. The  Satluj, the Beas, the Ravi, the Chenab and the Jhelum join together to enter the Indus near Mithankot in Pakistan. Beyond this, the Indus flows southwards eventually reaching the Arabian Sea, east of Karachi. The Indus plain has a very gentle slope. With a total length of 2900 km, the Indus is one of the longest rivers of the world. a little over a third of the Indus basin is located in India in the states of Jammu and Kashmir, Himachal Pradesh and the Punjab and the rest is in Pakistan. 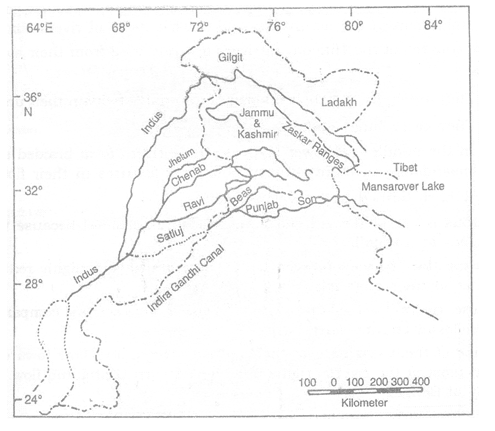 The Peninsular drainage system is older than the Himalayan one. This is evident from the broad, largely-graded shallow valleys, and the maturity of the rivers. Peninsular rivers are characterized by fixed course, absence of meanders, small drainage basin and non-perennial flow of water. He main water divide in peninsular Indian is formed by the Western Ghats. Most of the major rivers of the Peninsula flow eastwards and drain into the Bay of Bengal. The Narmada and the Tapi which flow through the rift valley are exceptions.

(a) The Narmada Basin:

(i) The Narmada originates on the western flank of the Amarkantak plateau at a height of about 1, 057m. It falls into the Arabian Sea south of Bharuch. The Sardar sarovar project has been constructed on this river.

(ii) Flowing in rift valley between the satpura in the south and the vindhyan range in the north the Narmada creates many picturesque locations. the ‘Marble rocks’, near Jabalpur where the Narmada flows through a deep gorge, and the ‘Dhuadhar falls’ where the river plunges over steep rocks, are some of the notable ones.

(iii) All the tributaries of the Narmada are very short and most of these join the main steam at right angles. The Narmada basin covers parts of Madhya Pradesh and Gujarat.

The Tapi originates from Satpura ranges in the Betul district of Madhya Pradesh. nearly 79 per cent of its basin lies in Maharashtra, 15 per cent in Madhya Pradesh and the remaining 6 per cent in Gujarat. The Tapi flows in a rift valley parallel to the Narmada but it is much shorter in length.

(i) The Godavari is the largest peninsular river system. it rises from the slopes of the Western Ghats in the Nashik district of Maharashtra. its length is about 1500 km.

(ii) Because of its length and the area it covers, it is also known as the Dakshin Ganga.  its basin cover parts of Maharashtra, Madhya Pradesh, Orissa and Andhra Pradesh.

(iii) The Godavari is joined by a number of tributaries such as the Penganga, the Preheat, the Manjira, the Wainganga and the Wardha. It finally drains into the Bay of Bengal.

(d) The Mahanadi rises near Sihawa in Raipur district of Chattisgarh and runs through Orissa to discharge its water into Bay of Bengal. fifty three per cent of the drainage basin of this river lies in Madhya Pradesh and Chattisgarh, while 47 per cent lies in Orissa.

(e) The Krishna is the second largest east-flowing peninsular river which rises near Mahabaleshwar in Sahyadri. Its total length is 1,401 km. the Koyna, the Tungbhadra and the Bhima are its major  tributaries.

(f) The Kaveri rises in Brahmagiri hills (3,341m) of Kogadu district in Karnataka. Since the upper catchment area receives rainfall during the southwest monsoon season (summer) and the lower part during the northeast monsoon season (winter), the river carries water throughout the year with comparatively less fluctuation than the other Peninsular rivers. Its important tributaries are the Kabini, the Bhavani and the Amravati.

(i) sambhar Lake is the largest inland salt take of India situated in Rajasthan. Other salt lakes in Rajasthan are Didwana, Degana, Pachadra, Kucha man, Lunkaransar.

(ii) Lunar Lake situated in Maharashtra is a crater lake.

(iii) chilka Lake situated in Puri district of Orissa & south of the Mahanadi delth is the biggest lake of the country.

(v) Pulicat Lake situated in the north of Chennai is a shallow lagoon. it has been barred by a long sandpit which is actually Sri Harikota lsland.

(vi) Loktak Lake situated in Manipur is the largest fresh water lake in the North East India. Keibul lamjao, the only floating National Park of the country is situated here.

(vii) Vembanad Lake is a lagoon in Kerala and is an important tourist spot. coconut islands are located in it.

(viii) Gohna Lake situated near Devprayag in Garhwal has been formed by a huge landslide across a tributary of the Ganga.

(a) Importance of Lakes:

(i) Lakes are very important to man.

(ii) A lake helps to regulate the flow of a river.

(iii) During heavy rainfall they prevent flooding and during the dry season, they help maintain an even flow of water.

(iv) Lakes are a valuable source of water.

(v) They moderate the climate of the surrounding areas.

(vi) They maintain the aquatic ecosystem.

(viii) They provide recreation through boating and swimming.

(i) Rivers have formed fertile northem plains and deltas containing alluvial soils which are the most productive agricultural lands of India.

(ii) Water from rivers is a basic natural resource essential for survival of humans, plants and animals, for agricultural and industrial activities.

(iii) The banks of rivers have been cradles of civilization all over the world. For  example Indus civilization in India.

(vi) Industrial; development has flourished along rivers. Most of industrial processes depend on water as a raw material, as a coolant and for generating of hydroelectricity.

Rapidly growing domestic, Municipal, industrial and agricultural demand for water from rivers naturally affects the quality of water. Today more and more water is drained out of the rivers. It has resulted in reducing their volume. A heavy load of untreated sewage and industrial effluents is emptied into the rivers.

(i) This affects not only the quality of water but also the self cleansing capacity of the river. For example, if there is an adequate stream flow, the Ganga water is able to dilute and assimilate pollution loads of large cities within 20 kms.

(ii) The result is that pollution level of many rivers is rising.

(iii) Concern over rising pollution of our rivers has launching of various action plants to clean the rivers.

(i) The activates of Ganga Action Plan (GAP) phase-l were started in 1985.

(iii) The steering Committee of the National River Conservation Authority reviewed the progress of the GAP and necessary corrections were made on the basis of lamed and experiences gained from GAP phase l.

(iv) They have been applied to the major polluted rivers of their country under the NRCP.

(v) The Ganga Action Plan (GAP) Phase-ll has been merged with the NRCP. The expanded NRCP now covers 152 towns located along 27 interstate rivers in 16 states. Under this action plan, pollution abatement work are being taken up in 57 towns. a total of 215 schemes of pollution abatement have been sanctioned. so far, 69 schemes have been completed under this action plan. A million litre of sewage is targeted to be intercepted, diverted and treated.

(i) The world’s largest drainage basin is of the Nile River in Egypt.

(ii) According to the regulation of the Indus Water Treaty (1960), India can use only 20 per cent of the total water carried by Indus river system. This water is used for irrigation in the Punjab, Haryana and the southern and western parts of Rajasthan.

(iii) The Sundarban Delth derived its name from the Sundari tree which grows well in marshland. it is the would’s largest and fastest growing delta. it is also the home of Royal Bengal Tiger.

(iv) Brahmaputra is known as the Tsang Po in Tibet and Jamuna in Bangladesh.

(v) The river Kaveri makes the second biggest waterfall in India. it is known as Sivasmudram. the fall supplies hydroelectric power to Mysore, Bangalore and the Kolar Gold Field.

(vi) 71 percent of the world’s surface is covered with water, but 97 percent of that is salt water. of the 3 percent that is available as freshwater, three quarters of it is trapped as ice.

(iv) Lakes of large extent are called the seas, like the Caspian, the Dead and the Aral seas.