(i) In Palampur faming is the main activity. Several other activities such as small scale manufacturing, dairy transport etc. are also carried out. In these production activities various resources combine to produce the desired goods and services.

(ii) Palampur is well connected with neighboring villages and towns. An all weather road connects the village to Raiganj and further on to the nearest small town. many kinds of transport such as bullock carts, tongas, bogeys, motorcycles, jeeps, tractors and trucks are visible on ties road.

(iii) Palampur has about 450 families belonging to several different castes. 80 families of upper caste own the majority of land. Their houses are quite large and made of brick with cement plastering. The SCs (dalits) comgrise one third of the population and live in one corner of the village and in such smaller houses, some of which are of mud and straw.

(iv) Most of the houses have electric connections. Electricity powers all the tubewells in the fields.  Electricity is also used in various types of small business. Palampur has two primary schools and one high school. These is a primary health centre run by the government and one private dispensary.

Production of any type of goods or services required the services of four factors of Production. 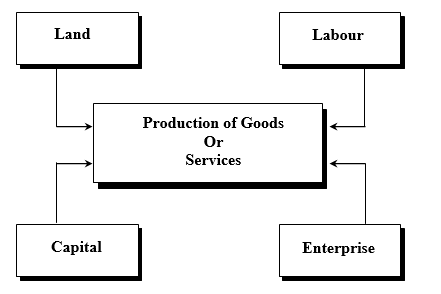 (i) First requirement is land and other natural resources such as water, forests and minerals.

(iii) Third requirement is physical capital, i.e. the variety of inputs required at every stage during production. Tools, machines, buildings can be used in production over many years, and are called fixed capital. Raw materials and money in hand are called working; these are used up in production.

Farming is the main production activity in Palampur. 75 per cent of the working people are dependent on farming for their livelihood. Since 1960 in Palampur, there has been no expansion in land area under cultivation. By then, some of the wastelands in the village had been converted to cultivable land. There exists no further scope to increase farm production by brining new land under cultivation.

(b) Ways to produce more from the same land:

All land is cultivated in Palampur. No land is idle. During the rainy (kharif) season, people grow jowar and bajra which are used as cattle feed. Between Octobers to December they cultivate potatoes. In the winter (or the Rabi) season they sow wheat. a part of the land area is also devoted to sugarcane which is harvested once every year. The main reasons why farmers are able to grow three different crops in a year are:-

(i)  As a result of the coming of electricity in the Palampur village, people have greatly improved the system of irrigation. They can now irrigate more lands quite effectively.

(ii) Tube wells were first installed by the government but soon people were able to set up their own tubewells.

(iii) By multiple cropping more then one crop is grow on a piece of land during the same year. All farmers in Palampur grow at least two main crops; many are growing potato as the third crop.

(iv)  The other way is to use modern farming methods for higher yield. Higher yields are possible from a combination of HYV seeds, irrigation, chemical fertilisers, pesticides etc.

Large increase in crop yields, leading to record food production started, in our country from 1960 onwards and marked a turning point in Indian agriculture which has led to green revolution in our country. The great increase in the production of food grain crops especially the wheat crop in our country during the last 30 years is called Green Revolution. This is because a sort of revolution has taken place in Indian agriculture leading to enormous food grain production. the revolution is called because it has led to unprecedented greenery of crops everywhere. The period 1960 to 1980 is also called ‘golden era’ for the record food grain production. it is because of the green revolution that our country has become salt sufficient in food production and even buffer stocks of food grains  have been created for use in the times of natural calamities like drought and floods.

(d) How Electricity help the farmers in Palampur?

(i)  The major impact of the spread of electricity in Palampur was to transform the system of irrigation.

(iii) The irrigation capacity of electricity run tube wells is much more then that of the Persian wheels.

(iv) Spread of electricity leads, literally the whole society from darkness to light. it transforms all social economic norms of life . it is like a whole new world.

(e)   Sustainable use of land:

(i)  land being a natural resource, it is necessary to be very careful in its use. The modern farming methods have overused the land resource.

(ii) Green Revolution is associated with the loss of soil fertility due to increased use of chemical fertilizers.

(iii) Continuous use of groundwater for tube well irrigation has reduced the water-table below the ground.

(iv) Environmental resources like soil fertility and groundwater are built up over many years. Once destroyed, it is very difficult to restore them.

(f) Distribution of land between the farmers of Palampur:

(ii) Of the remaining families who own land, 240 families cultivate small plots of land less then 2 hectares in size.

(iii) In Palampur, there are 60    families of medium and large farmers who cultivate more then 2 hectares of land. A few of the large farmers have land extending over 10 hectares or more.

(g) Who will provide the labour?

(i) Farming requires a great deal of hard work. Small farmers along with their families, cultivate their own fields. Thus, they provide the labor required for farming themselves. Medium and large farmers hire farm labourers to work on their fields.

(ii) Farm labourers come either from landless families cultivating small plots of land. Unlike farmers, farm labourers do not have a right over the crops grown on the land. Instead, they are paid wages by the farmer for whom they work. Wages can be in cash or in kind of crop. Sometimes labourers get meals also. Wages vary widely from region to region, from crop to crop, from one farm activity to another (like sowing and harvesting).there is also a wide variation in the duration of employment. a farm labourer might be employed on a daily basis, or for one particular farm activity like harvesting, or for the whole year.

(h) The capital needed in farming:

(i)  Most small farmers have to borrow money to arrange for the capital. They borrow from large farmers or the village moneylenders or the traders who supply various inputs for cultivation. The rate of interest on such loans is very high. They are put to great distress to repay the loan.

(ii) In contrast to the small farmers, the medium and large farmers have their own savings from farming. They are thus able to arrange for the capital needed.

(i) Sale of Surplus Farm Products:

(i) Small farmers have little surplus because their total production is small and from this a substantial share is kept for their own family needs. so, it is  the medium and large farmers who supply wheat to the market.

(ii) Large and medium farmers sell the surplus farm products. a part of the earnings is saved and kept for buying capital for the next season. Thus, they are able to arrange for the capital for farming from their own savings. Some farmers might also use the savings to buy cattle, trucks, or to set up shops.

(b) Small scale manufacturing in Palampur:

(c) The shopkeepers of Palampur:

People involved in trade (exchange of goods) are not many in Palampur. the traders of Palampur are shopkeepers who buy various goods from wholesale markets in the cities and sell them in the village. There are a few small general stores in the village selling a wide range of items like rice, wheat, sugar, tea, oil, biscuits, soap, toothpastes, batteries, candies, notebooks, pen, pencil and even some cloth.

there are a variety of vehicles on the road connecting Palampur to Raiganj. Rickshawallahs, tongawallahs, jeep, tractor, truck drivers and people driving the traditional bullock cart and bogey are people in the transport services. They ferry people and goods from one place to another, and in return get paid for it.