NCERT Solutions Class 10 English Not Marble nor the Gilded Monuments

Not Marble nor the Gilded Monuments Class 10 NCERT Solutions

Not Marble nor the Gilded Monuments NCERT Solutions Class 10

1. Look at the following picture carefully. 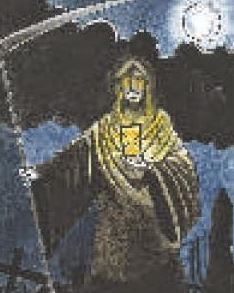 (b) What are the other symbols associated with Time?

'Time is a 'giant wheel' revolves around incessantly. 'Time' is a 'thunderous tide' or 'wave' which sweeps everything in its way. 'Time' is an 'uncontrollable horse' which runs relentlessly.

6. On the basis of your understanding of Shakespeare's sonnet, answer the following questions by ticking the correct options.

(a) The rich and powerful got ornate monuments made in order to _______________
i. show off their wealth
ii. display their power
iii. show their artistic talent
iv. be remembered till posterity

iv. be remembered till posterity

iii. the person he loves

i. the sonnet the poet has written for his friend

iv. the poet's study where he is writing.

(a) Why do you think the rich and powerful people get monuments and statues erected in their memory?

The rich and powerful people want to be remembered till posterity so they erect monuments and statues in their memory.

(b) Describe how the monuments and statues brave the ravages of time.

Statues are made of strong metals or stones. They are covered with gold to decorate them and to make them look splendid. In the same way, monuments are made of strong marbles. They are designed and polished in such a way that can protect them for a long time. Thus, statues and monuments are protected to brave the ravages of time. They do not get corroded easily by wind, rain or sunshine.

(c) Why does the poet refer to Time as being sluttish?

The poet refers to the time as being sluttish as it changes suddenly and unexpectedly. Its habits and behaviour are unpredictable. It turns favourite circumstances into adverse circumstances. It neither waits nor cares for anyone. It spares no one. Nobody can understand its changing mood.

(d) The poet says that neither forces of nature nor wars can destroy his poetry. In fact, even godly powers of Mars will not have a devastating effect on his rhyme. What quality of the poet is revealed through these lines?

The Poet believes that his poetry can not not be destroyed by the forces of nature or wars. It will be read by coming generations. It will be remembered till posterity. It can not be forgotten. Even Godly powers of Mars will not have a devastating effects on his rhymes. It will survive in the hearts of its lovers. In this way, the poet is quite sure of the immortality of his poetry.
The poet’s extreme optimism and deep faith in the power of love is revealed in these lines.

8. Shakespeare's sonnet has been divided into three quatrains of 4 lines each followed by a rhyming couplet. Each quatrain is a unit of meaning. Read the poem carefully and complete the following table on the structure of the poem

(a) The poet uses alliteration to heighten the musical quality of the sonnet. Working in pairs, underline the examples of alliteration in the poem.

A few instances of alliteration in the poem are:

Unswept stone besmear’d with sluttish time;
When wasteful war;
Nor Mars his sword nor war’s;
Praise shall still;
Lover’s eyes.

(b) Identify Shakespeare's use of personification in the poem.

“The living record of your memory” has been personified here in the sonnet as a man. He shall pace forth against death, bereavement, etc. He shall live life even in the eyes of all posterity.